Was Paul Rosenberg the most influential interwar French art collector-dealer?

Many foreign artists had settled in France after 1900 and more galleries took the risk of exhibiting their works. So perhaps it was not surprising that most of the truly famous art collectors and dealers in Paris had been born and raised in Germany, or still had their fathers’ and grandfathers’ German surnames. In partic­ular take note of:

Jacques Seligmann (1858–1923) was an important German antiquarian and art dealer. He moved to France in the 1870s but it was only in 1909 that Seligmann bought Paris’ respected Hôtel de Monaco where he opened for business. In 1912 he opened a new Paris office and two years later launched himself in New York as well.

Berthe Weill (1865–1951) was the French art dealer who played a vital role supporting and marketing late C19th art, even before it was popular in France. The young artists affectionately called her La Mere Weill.

Alphonse Kann (1870–1948) was a French collector who acquired very fine late C19th and modern art. His massive collection was hidden in a St.-Germain-en-Laye mansion, but was looted in October 1940 by Nazi occupiers.

Georges Bernheim (1879-1956) was one of the most important gallery owners and art experts in pre-WW2 Paris. The Bernheim-Jeune Gallery was the heart and soul of the Paris art world. Tragically Georges, his wife and son were deported by the Nazis in 1943 and exterminated.

Rene Gimpel (1881-1945), son of an Alsace collector who moved to Paris, took over from his father as a art dealer and art diarist in his own right. Some of Rene's collection had been removed to safety in England before WW2 but most was looted or destroyed in Paris during the war. Rene died in a Nazi concentration camp but his sons Peter and Charles survived and set up Gimpel Fils in London in 1946

Daniel Henry Kahnweiler (1884-1979) was young German graduate interested in work as an art dealer. He moved to Paris and opened his first gallery in 1907. Kahn­weil­er organised 80 exhibitions of works by Braque, Picasso, Klee, Léger, Derain and Gris, and was the author of many books about cont­emp­orary art in general and cubist art in particular. During the war, he gave his Paris gallery to a non-Jewish relative and hid from the Nazis near Limoges.

Leo­pold Zborowski (1889–1932) was a Polish man of letters. Galerie Zborowski, which opened in 1926, was Leopold’s peak achievement as an exhibitor and patron. He was a close friend and impressive patron of Modigliani, Soutine, Kanelba and others.

Nathan Wildenstein (1851-1934) was a German who moved to Paris and established an art dealership there. In time he became one of the pre-eminent art dealers in Europe. Later he added a New York gallery in 1903 and one in London in 1925. His son Georges specialised in Impressionist and Post-impressionist works. 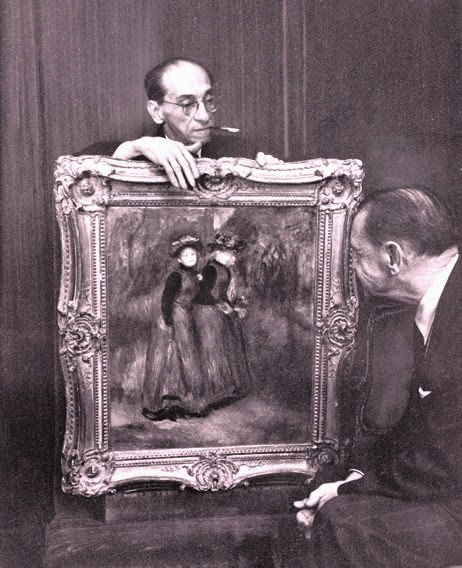 The only French art dealer and gallery owner from the era who I did not mention was Paul Rosenberg (1881–1959). Readers may know of a book, written by his French grand­ daughter Anne Sinclair, called My Grand­father’s Gallery: Family Memoir of Art and War (Text Publishing 2012). Sinclair described how she found a box of letters to and from her maternal grandfather, letters that took her on a journey through decades of previously unknown family and national history.

While I knew a great deal about Weill, Kahnweiler and Bernheim, for example, I knew very little about Rosenberg. Paul’s father was a French antiques dealer who took Paul into the business, specialising in Impres­sion­ist and Post-Impressionist art. Wise man that he was, Old Man Rosenberg encouraged young Paul to travel to the art centres of the world to acquire experience and to meet useful people. It was not until 1906 that Paul & his brother took management roles in the business, and in time took over from dad.

Paul Rosenberg’s two most interesting connections after WW1 were his partner Georges Wildenstein and his own brother-in-law Daniel-Henry Kahnweiler! The young dealer could not have got a better start in his career! It was through Kahnweiler that Paul Rosenberg eventually enjoyed a special and exclusive contract with Pablo Picasso (1918-40). And it was from Kahnweiler that Rosenberg learned to support his artists financially - finding them flats to rent, agreeing to buy their works with exclusive contracts, recommending summer holidays in the south of France.

It all ended in tears when France was occupied in 1940. The Galerie Rosenberg was taken over by the Nazis on the orders of Otto Abetz, German ambassador to Paris; the collection was declared Degenerate and looted. What happened to many of his art treasures may never be known. But at least Rosenberg had the good luck & good management to get his family into exile in 1940. He reopened his business in New York and survived the war intact. The family did not return to Paris until the war ended, sparking an endless pursuit of his remarkable pre-war art collection.

Was Paul Rosenberg the most influential of all French art collectors and dealers until WW2? I don’t think so. I listed some of the people I was most impressed with.

Did he represent the greatest modern artists associated with the Ecole de Paris? Yes he certainly did sustain exclusive contracts with Picasso, Braque, Marie Laurencin, Fernand Leger, Matisse and others. And admit­tedly, when Kahnweiler was declared a German alien in WW1, Rosenberg could and did fill the gap in France. But the book was written by his granddaughter!! Of course she would think that he was the greatest man to walk the earth.

In 2007 New York's Museum of Modern Art archives accepted the generous bequest of the papers of Paul Rosenberg. According to MoMA, this French art dealer and collector was best known for his role in promoting early modern painters in France and for facilitating the migration of French pictures to the USA during the first half of the last century. As such, he actively upheld the traditions of connoisseurship and innovation on which the Museum was founded, and he had dealings with many artists and collectors who played significant roles at MoMA in its early years. Rosenberg was an advisor and long time friend to the Museum’s first director, Alfred H Barr, and he collaborated frequently with MoMA curators on exhibitions, loaning or donating great works of early modern French art from his private collection and his galleries. He was named a Patron of the Collections at the Museum in 1957.

Paul Rosenberg and Georges Wildenstein had a close partnership. But the times changed and their countries changed. So nothing stands still in the art world.

Hello Hels, All of the names you mention are featured continually, both flatteringly and otherwise, in the entertaining diaries of Rene Gimpel. Gimpel himself should probably be added to your list. A major art dealer in early 20th century Paris, he died in the Nazi concentration camps.

By the way, the Diaries were translated by a John Rosenberg--I wonder if he was some relation to Paul.
--Jim

read Lost Museum: the Nazi Conspiracy to Steal the World's Greatest Works of Art by Feliciano. There was nothing like Nazi looting on a massive scale to force the great collectors and dealers out of Paris and to put them on different career paths.

I didn't know the name Rene Gimpel, even though he lived at the right time (1881–1945) and in the right place (Paris) for my post. Plus he worked with everyone I think was important: Picasso, Laurencin, Braque, Wildenstein etc. He was even the great nephew of another of my heroes, Louis Vuitton!!

You have just sorted out my reading for this weekend, thanks :)

Hi again, You are in for a treat reading the Gimpel book. He gives his private opinion on everyone in the art market--painters, dealers, and American millionaire collectors. I was further pleased to note his favorable impression of the city of Cleveland and its museum.
--Jim

I have added a bit of Gimpel family tree to the list of very impressive art dealers and collectors with Alsatian backgrounds.

The National Gallery of Australia says two very interesting things about Rene A] the Gimpel and Wildenstein families in Alsace had a history of inter-marriage. And B] the sister of Lord Joseph Duveen married René in London in 1912.

Get complete list of rental apartments in Parisflatlist at our website, parisflatlist.com and book your selection right away and make your delightful stay in Paris.