Swarovski crystals and the Czech city of Jablonec

I might be the only blogger in the southern hemisphere who can pinpoint the Czech city of Jablonec with total accuracy. My Czech parents-in-law were liberated in 1945 and moved to Jablonec to work.

In the 18th century, the first glass jewellery was produced in Jablonec and exported, spreading the town's name throughout Eur­ope. Even before it was given full town status by Emperor Francis Joseph in 1866, Jablonec was permitted to organise two annual fairs and a weekly market. For a small city (only 50,000 people even now), it was boxing above its weight. Naturally the Prussian-Austrian War of 1866 was a disaster for the glass and artificial jewellery business but one good thing happened - Jablonec traders started to turn to foreign markets instead.

In time, new machines in Jablonec could produce a wider variety of glass jewellery, specialising in a process that pressed molten glass into a heated mould – reliable and not outrageously expensive. The moulds were so important that most people believed the Czechs were the masters of pressed glass. 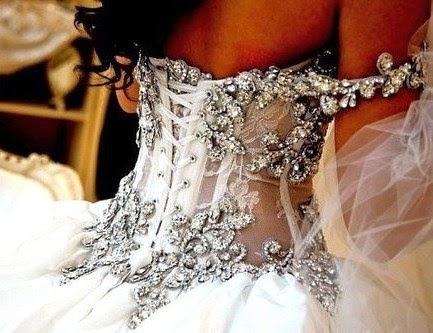 Swarovski crystals
on the back of a wedding dress.

After WW1, Bohemia became part of the new state of Czechoslovakia and within a decade, the Czechs were the largest glass exporters in the world. Even the Depression did not close the factories. But catast­rophe followed. In October 1938, after the Munich Agreement, Jablonec was occupied by the German Reich as a part of Sudetenland.

Today the main building of The Museum of Glass and Jewellery in Jablonec still looks as if it emerged during floral Art Nouveau era, It did, initially as the 1904 home of the Zimmer & Schmidt Company. If visitors wanted to review 100+ years of the city’s glass and metal jewellery and glassware, this is where they would come.

This Northern Bohemian city’s most famous citizen was Daniel Swartz (later Swarovski) (1862–1956). His father had been a glass cutter who owned a small glass factory and there was every expectation that young Daniel would complete his apprenticeship in glass-cutting, eventually taking over daddy’s business.

The first ever International Electric Exhibition was held in the Palais de l'Industrie in Paris’ Champs-Elysees in 1881. I am not sure if young Daniel was there in Paris or perhaps he visited the International Electric Exhibition in Vienna in 1883 instead. In either case he saw machines invented by Edison and other pioneers, and recognised the signific­ance of the new technology for his own career plans. Inspired by the Electric Exhibitions, he passed his father’s expectations; in 1892, Daniel developed and patented an electric cutting machine that cut crystal jewellery stones with great precision. And of course the work was much faster than had formerly been possible by laborious hand work.

Most sons want to move on. In 1895, Daniel Swartz changed his name to Swarovski and with two financiers, Armand Kosman and Franz Weis, founded the Swarovski Company. They established their crystal-cutting factory in Wattens in the Tyrol part of Austria.

From my perspective it was a shame that he left Czechoslovakia. But it made perfect sense that he should lease an existing factory that had its own small power station. Since the grinding processes that Daniel Swarovski patented were very energy-intensive, he was delighted that the Wattens site could generate hydraulic electricity from the river Inn. So important was the original Wattens site that the company still runs a spectacular crystal-themed museum there, Swarovski Crystal Worlds. 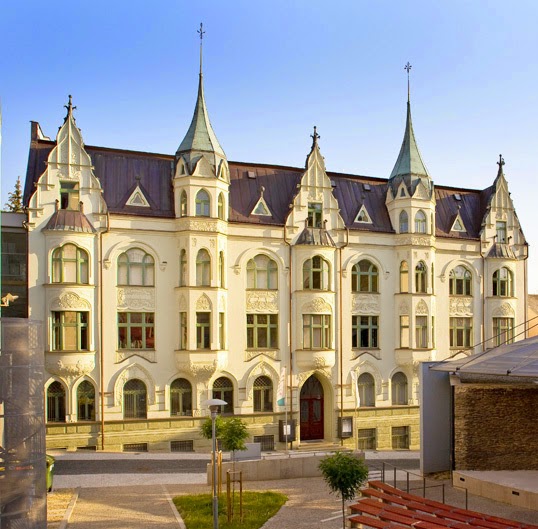 The Museum of Glass and Jewellery in Jablonec

Swarovski never hid the fact that his products were made of crystal glass and were not made from diamonds. But if he made the crystal beautiful enough, women would actively choose his fashion accessories and crystal-based ornaments for their homes. Elegant women in Paris and St Petersburg society clearly loved the flawless brilliance of Swarovski’s products.

After WW1 it is said that the entire fashion world became very interested in Swarovski crystals, once the famous designer Coco Chanel started using them in her finery. Jewellery stones were placed in decorative laces, and applied to garments and accessories.

Swarovski celebrated its 100th anniversary with a variety of special activities and products in 1995. Vivienne Becker's book called Swarovski: the Fascination of Crystal was published. And the Swarovski Crystal Society organised a trip from Prague to Wattens with 2,000 participants. I wondered why the trip started in Prague and not in Jablonec. Apparently the Swarovski Society wanted to show visitors the amazing Museum of Decorative Arts in Prague, especially the jewellery.

I have seen the Swarovski crystals on wedding dress programmes on tv. They are gorgeous, but they greatly add to the cost of the dress,

I first heard of Swarovski about ten years ago. A Swarovski shop is a beautiful place to be in. Apart from Waterford in Ireland, I've always thought, wrongly perhaps, that the best crystal came from Czechoslovakia.

Czech crystal was wonderful. I inherited my mother's crystal from the pre-war era and it is still beautiful.

you are so right. As far as I can tell, lovely wedding dresses without Swarovski crystals cost about $2000. Pnina Tournai, the queen of designers and lover of Swarovski, starts at $5000 and goes up and up!

The best of the best, yes. When Bauhaus (in Germany 1919-1933) was sending out its designs to manufacturers of glass, gold, porcelain, furniture etc, they could select anywhere in the world. For glass art, they used Czech makers!

as you know, I liked Emperor Rudolf II. His gem cutter, Caspar Lehmann, invented the process of engraving on glass. From then on, Bohemia became the world’s leading producer of crystal. In time Czech crystal became easier to make, sell and export. And by the later C19th, Bohemia's crystal was loved throughout the world.

All this I did not know! What was the reason for the name change - just to sound less German?

I have a few small crystal pieces I bought in the Czech republic, but did not know about Jablonec otherwise I would have visited. The museum is a very handsome building.

I found it very difficult to pin down Daniel Swartz's exact details. What was his father's name? Why did Daniel move to a more exotic name? Which International Electric Exhibition changed his life - Paris or Vienna? Did Swarovski and his two financiers set up in Paris in the early days? Did Daniel have one son or three sons of his own?

I am with you re visiting Jablonec. I loved Prague, Plzen and Brno, but would never have thought of going north to the German border if it hadn't been for my in-laws.

I keep hearing about Swarovski crystals and I admit it is the first time I am reading about them. Somehow I had the feeling they were vain little things. That was an interesting piece of history and enlightenment.

*nod* vain little things would appropriately cover most of the jewellery in the world, real and artificial. But the history of glass making in Bohemia is especially amazing.

Really beautiful, ready to Valentine's Day, going to buy copies of jewelry for my girlfriend, give her a surprise, she is more like Swarovski Crystals, but the style is too much, I do not know to pick that paragraph, you give points.

what a great present to give - she is a lucky young lady :) I am very pleased you enjoyed the history of Swarovski.

Just east of Innsbruck, it is worth a visit to the village of Wattens to visit Swarovski Crystal Worlds with its 14 subterranean Chambers of Wonder. It will reopen in May 2015, bigger better and brighter than ever - quite fitting in Swarovski's 120th anniversary year. A highlight will be a crystal cloud of 600,000 hand mounted crystals, the largest artistic work of its kind in the world.

Thank you. I am a bit ambivalent about seeing 600,000 hand mounted crystals in one cloud. The individually sewn crystals on the back of the wedding dress in the photo look, to my eyes, more sensational.

And the Swarovski Crystal Society organised a trip from Prague to Wattens with 2,000 participants. I wondered why the trip started in Prague ... swkcrystal.blogspot.it

thank you for reading the post. As much as I love Prague, I wondered exactly the same thing.

Daniel's father owned a small workshop. Swarovski family business helped them to make money for a living, although it did not indulge them with luxury. Of course Daniel helped his father run a business, but the boy dreamed about becoming a musician. He wanted to become a violinist. Alas, he could not master the violin and went to Paris to be educated.

many thanks. I didn't know about the music, but I do know that having a supportive father in the business is always important for a young man looking to mark his mark on the world. Thank you, Franz Anton Swarovsk (dad).

Very interesting Blog. I was born in Gablonz/Jablonec in 1937. After the war during the expulsion of German-speaking citizens my Mother and I moved to Canada to join up with my Grandparents and my Grand-Uncle - all born during the Austro-Hungarian Monarchy in Gablonz.
My father's family moved from Silesia to establish glass huts in Johannesberg/Janov/Lautschnei/Laucna in the 16th. century. He, together with his Mother, a member of the Streit Family built glass factories specializing in jet buttons, ashtrays and perfume atomizers. He also began an export company and founded an import company in New York. My mother's Family moved from Idar-Oberstein/Rheinland Pfalz in the 18th. century to establish manuacturing specializing in goldplating and later became exporters with branches around the world. I ran the Family business in Montreal for 35 years importing from Germany, Austria, Czechoslovakia (visited Jablonec twice a year) and eventually from Japan, Taiwan, Korea, China and Thailand. How the world changes. My wife and I visited the excellent Swarovski center in Wattens - a worthwhile visit. Other famous persons from our area included the Riedel Family, the Scheibler Family, and of course, Mr. Porsche. Regards KurtR.

welcome to the blogging world. You have a great story to tell! And hopefully great photos as well. As you can see throughout this blog, I am passionate about the decorative arts, particularly silver and porcelain art, and would have greatly valued your business in Montreal, importing from Germany, Austria and Czechoslovakia.

My husband was born in Jablonec in 1947, waited for a visa to Australia, Canada or Argentina, and arrived in Sydney in 1951. We may be cousins :)