This post was inspired in the first place by the Australian Govern­ment’s own history of modern resid­ent­ial architecture. They noted that architects and builders had to make new and old buildings environmentally friendly and sustainable. The OECD reported that the construction industry consumed 32% of the world's resources with the sector accounting for 12% of fresh water and 40% of total energy consumption. Architects had to account for the use of water and energy in a sustainable way in new projects.

The timing was perfect. Cyclone Tracy was a tropical cyclone that devastated the city of Darwin on Christmas Day 1974, destroying 80% of the city’s houses. Soon after, in 1978, young Adelaide archit­ects Phil Harris and Adrian Welke collaborated on the publication of "Influences in Regional Architecture", Australia's first history of architecture outside the urban arena.

In 1980 Troppo Architects started up, using a Northern Territory Government history grant to research the History of Trop­ical Housing in Australia’s Top End. Soon the practice established offices in Darwin, Towns­ville, Adelaide, Perth and Byron Bay, and has completed projects overseas as well. In every case, the focus was on landscape, climate and natural resources, especially outside urban areas.

The practice became famous due to a Low Cost House Competition org­an­ised by the City of Darwin. Their prototype had to be economical to build, climat­ic­ally comfortable to live in, easy to extend and lim­ited in its use of energy. Similar criteria have been applied ever since, in remote projects like the Kimberleys, Esperance, far-north South Australia, Alice Springs and far north Queensland. 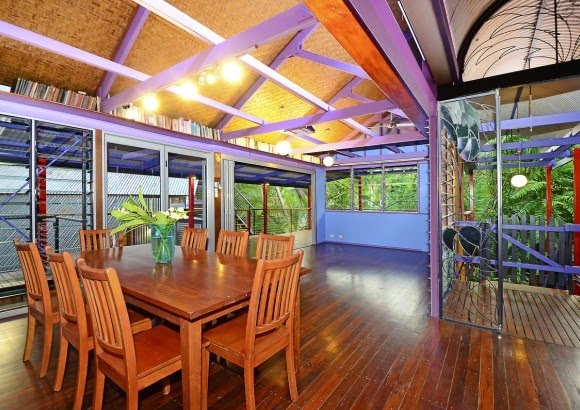 Green Can house, Darwin
by Troppo
completed 1983
dining room (above) and veranda (below) 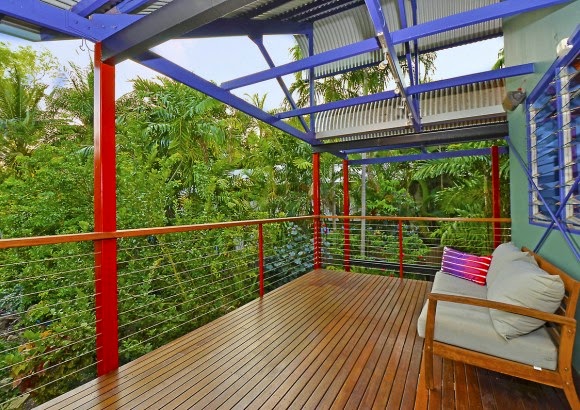 Troppo significantly shaped the way citizens in the Northern Territory lived by creating housing that integrated indoor living with the outdoors. Troppo looked back to the houses of the 1920s and 1930s which were a] often elevated, b] designed around the concept of a ver­anda and c] used lightweight materials. Their first house, Green Can 1983, was a roofed outdoor room! First built as part of a low-cost housing competition, the house used lightweight material like corrugated iron and was elevated to maximise cross-ventilation, making air-conditioning unnecessary. This was a radical departure from the standard Northern Territory architecture which relied on concrete structures to protect against cyclonic weather, and air-conditioning to make the heat bearable.

Troppo Architects wanted to promote a sense of place in each project via an architecture that responded to the tropical climate and a belief in sustainability. Their design projects eg Darwin Enter­tainment Centre, completed in 1986, showed a simplicity and cons­traint found in iconic early Australian wool sheds and beach houses.

Troppo houses were built on the idea of the vegetation form­ing the outside wall of the house. This cooled the house and stopped the full force of the wind. Troppo houses were surrounded by fantastic tropical gardens. The houses incorporated many environmentally sensitive strategies and tropical treatments for passive cooling and ventilation, and there was an on-site sewerage treatment system using worms as composting agent.

Not surprisingly these architects were selected by the Gagudju Community, administ­rators of the Kakadu National Park, to design park facilities in 1987. Partner Glenn Murcutt won the 2002 Pritziker Prize, seen as the Nobel Prize for archit­ects!

Bluescope  gave complete descriptions of Rozak House 2002, a striking house built in steel and glass, perched on a steep ridge in rugged bushland 80 km south of Darwin. The inside out theme of Rozak House showed how to produce comfortable architecture in a hot climate AND how to create a strong affinity with the northern Australian landscape. Linked by decked walkways, two bedroom pav­il­ions leaned to, and made the most of its southern outlook. Twisted corrugated-steel roof planes projected into their surr­ound­ings, evoking stretch­ed fabric canopies.

There were no glass windows. Instead they used plywood walls, tallow-wood shutters, and corrugated iron roofing to keep the house open to fresh air, but insulated from intense heat and protected from strong cyclone winds. Wide eaves sheltered the house from the sun, and tubes along the roof expelled hot air and vertical fins directed cooling breezes into the living spaces. Because the house rests on stilts, air circulated underneath and cooled the floor. The owners did not mind a rough look, as long as the residence worked well. 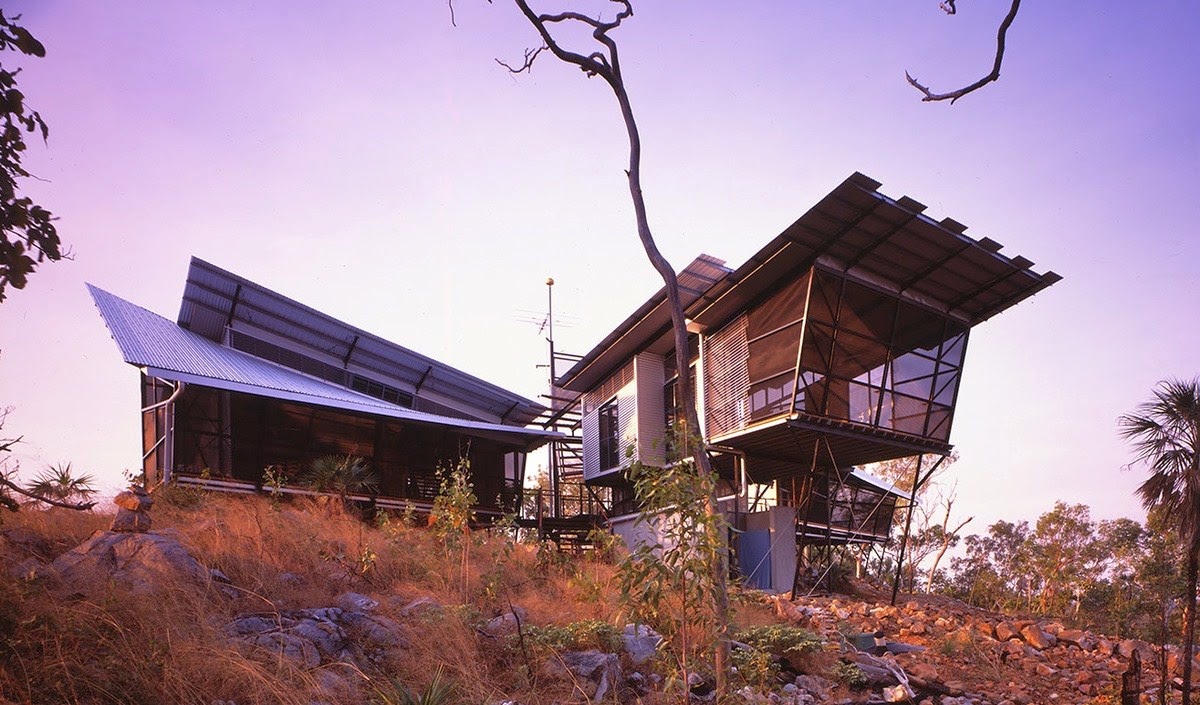 In 2011 four of these professionals were driving to a site, preparing for a competition for a new sustainable tropical city on the mangrove forest edge of Darwin harbour. The two Darwin architects-directors of Troppo, Greg McNamara and Lena Yali, and urban landscape architect Kevin Taylor of Taylor Cullity Lethlean were killed by a huge emergency vehicle, flashing lights and sirens blaring, that was going through a red traffic light. Only Phil Harris survived the crash. What an unbelievable tragedy :(

Very interesting. I like the designs and the houses themselves. However, in my experience, cross ventilation and other mentioned cooling facilities just don't cut it, especially in areas of high humidity. I've sat midwinter in an apartment on Darwin Harbour with one wall completely open to harbour breezes and wished, please close up and put the air con on.

Yes, it was a tragedy to lose such talented and adventuristic people.

The owners didn't mind a rough look, for sure. We are not talking Toorak refinement here, but corrugated iron reminds me of nissan huts after the war.

we are so used to our clean, modern, oh so smooth taste in domestic architecture down here in Melbourne, I wonder if it is possible to change mind sets.

But then I suppose architecture was always influenced by regional issues. Remember the Old Queenslanders? I thought they were beautiful, even though I had never seen one south of the Queensland border.

Hello Hels, These houses have the same problems as many concept houses or cars. Clever ideas are introduced, but in an extreme form that would not be suitable for many people. Some visionaries can get carried away with proselytizing, and forget to incorporate human elements. I get a little of the same feeling as when you featured those communal apartments, that I am being told how to live. Also, all those spindly supports make me wonder about the longevity of these buildings.

I suppose that expensive and high-end houses have the same problems. In the end, we adapt some of the new features, and progress goes on. That is why the crash was doubly tragic; those designers didn't have enough time to develop and modify their own ideas.
--Jim

I don't mind if people are told how to live, but I agree that their living conditions have to be comfortable, attractive and spacious. The Troppo visionaries were responding to state government requirements, but you may be correct that they forgot to incorporate enough human elements.


Great post you shared, you have now become top of my list. You were unknown to me before but have found your content to be fantastic.

So great work for informing us of the possibilities and following a certain path.

I really appreciate your hard work an giving us some information and inspiring others to follow.