Spies, Writers and Artists in Hampstead

I have just read the fascinating book The Lawn Road Flats by historian David Burke (Boydell, 2014). The firm Isokon (Isometric Unit Construc­tion Control Co) was established to make modern flats, houses and furniture. Their Lawn Road Flats in Bel­size Park in Hampstead was a remark­able building that I knew and loved. It was said to be the first modernist building in Britain to use reinforced concrete in domestic archit­ec­ture. The four storey build­ing was designed by the Canadian ex-pat archit­ect Wells Coates in 1932, a passionate follower of Le Corb­usier and the Bauhaus. 34 two-bedroom flats built out of steel, concrete and glass!

Each flat was small, was built to a standard and minimalist plan, and used Isokon-designed furniture. Since this was an experiment in semi-communal living, most of the flats had only a kitchette. Food was cooked in a large com­munal kitchen, then conveyed to the res­id­ential floors. All the flats were linked to exterior corridors, located on side facing the street, in a style that reminds us of an ocean-going liner. 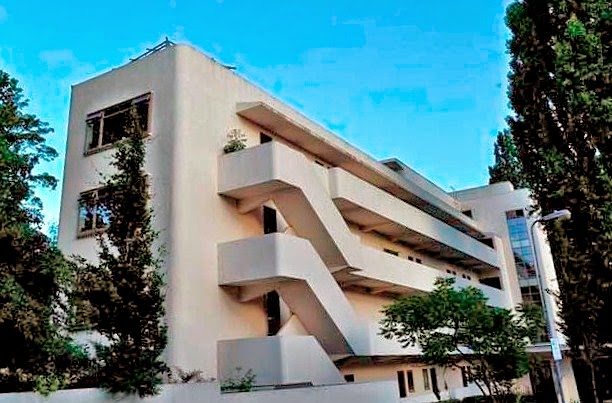 The Lawn Road flats in Hampstead, opened in 1934

Bauhaus Modernism was initially seen as suitable for Bright Young People, a metropolitan élite. So although the flats were uniform in layout, their small size and intimacy promoted a Bohemian atmosphere, some­thing like the Impressionists in their Montparnasse attic rooms. In fact once the complex was completed by 1934, the residents adored living there. And as the complex was designed for not-wealthy young professionals who wanted to dispense with domestic drudgery, rent included cleaning, a laundry service and shoe shining which were provided on site. On the ground floor were located the staff offices, laundry and community kitchen. The kitchen was remodelled in 1937 by Marcel Breuer to become the Isobar restaurant.

With the help of the English architect Maxwell Fry, Walter Gropius 1883–1969 left Nazi Germany in 1934, intending to stay in Britain, at least for some years. In 1935 Gropius got his Bauhaus colleague Lazlo Moholy-Nagy to move to London. Moholy-Nagy became in­volved with Isokon when he ar­r­iv­ed and designed prom­otional mat­er­ial. In March 1937, Gropius re­com­­mended another of his old Bauhaus mates, Marcel Breuer, to Is­ok­on. 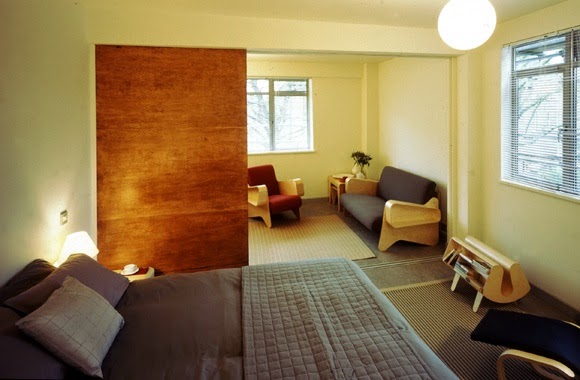 One interior, restored to its 1934 design

Isokon closed with the outbreak of war, but many of the Bauhaus arch­it­ects and designers had left Germany by then. Gropius, Breuer and Moholy-Nagy, who all lived in the Isokon Building, avoid­ed the Holocaust and survived. Other Bauhaus alumni could not escape Germany and were exterminated.

What I did not know was that the Bohemian professionals and bachel­ors, and escapees from Nazi Germany, were not the only residents of the Isokon Building. David Burke tells of a fashionable elite that was att­racted to communal living, including crime novelist Agatha Christie and sculptors Henry Moore and Barbara Hepworth. Since I have written a great deal in lectures about Christie, Moore and Hepworth, I jumped on this book. And there was also an impressive list of BBC producers, novelists and academics.

Floor plan of the small, but perfectly formed flat.

Naturally Isokon’s most famous resident was going to be Agatha Christie, who lived there with her second husband Max Mallowan throughout WW2 and after. When Max left London to serve in Cairo in 1942, Christie got deeply involved in writing her novels, to survive the loneliness as best she could. It was here that she produced her only spy novel, N or M?(1941), which revealed the author’s deep knowledge about wartime British intelligence.

Given the subtitle of Burke's book, Spies, Writers and Artists, this should not surprise anyone. Burke suggested there were at least 32 agents connected to Soviet espionage and linked with the Lawn Road Flats, including Arnold Deutsch, the controller of the Cambridge Five. I did not even know the name Melita Norwood, British civil servant and KGB intelligence source from 1937 on. Burke said she was the longest-serving Soviet spy in British espionage history.

Despite this generation of residents being traumatised by WW1 and shaped by the Depression, the rise of Nazism and ongoing political upheaval, they were amazingly idealistic people. They valued soc­ial­ism, communal living, activism and intellectual excellence. Approp­riately the block of flats has been granted Grade I listed status, placing it amongst Britain’s most architecturally and historically important buildings. The Bauhaus would have saluted this heritage protection.

Hello Hels, I can see many of the attractions in living in apartments like these, both architecturally and as part of an artistic colony, although personally, I think I would resist having someone else planning the ideal way for me to live.

Your mentioning Agatha Christie's married name reminded me of this tribute from one of Ogden Nash's doggerel poems: "Her name is Agatha Christie Mallowan,/ and in my book she is second to no one."
--Jim

Did Wells Coates actually study at Bauhaus in Germany? Or did he have Bauhaus models in the UK.

I would love great planning and design, and would love to be part of an intellectual colony. But I know that the typical Isokon flat was VERY small. OK for one professional man, really tough on a married couple.

You might enjoy one aspect of Agatha Christie's life :) See http://melbourneblogger.blogspot.com.au/2011/04/agatha-christies-greatest-mystery-her.html

I can find no trace of Coates spending time at Bauhaus in Germany. But to show you his commitment to Bauhaus architecture, consider Embassy Court on the Brighton seafront. This 11 storey block of flats by Wells Coates (1935) was another early example of Bauhaus taste in the UK, a minimum-flat concept with plain surfaces and every fitting that a modern resident could want.


Great review Bauhaus is the school that inspired of many todays art,


Check my review out

oh yes I agree with your post, thank you. Bauhaus students and staff were fine craftsmen, but more than that they were committed ideologues.

From a very parochial viewpoint, they look like the Oasis flats opposite the Exhibition Buildings in Melbourne?

do you have a reference to a photo of the Oasis flats? I am assuming from your comment that they were also built during the Deco era, say 1925-1940.

Hello Hels. Thanks for the link to the Cairo flats - what a fantastic external staircase!

Lawn Road flats is one of our best modernist buildings - there is a small gallery adjacent to it now, open during the summer months only, but well worth a visit as it tells the story of the building and some of the people who lived there in the early years.

Great idea. I haven't been to London for a couple of years and missed the new gallery. But I found the story on line in The Skandium blog.

On the 9th July 2014 – the exact 80th anniversary of the opening on Lawn Road Flats – a plaque unveiling has taken place in the presence of the families of the original architect Wells Coates and the clients etc. The gallery is now showing the fascinating history of Lawn Road Flats. http://www.skandium.com/blog/archives/2518