The Monuments Men were more Frick-based than Hollywood-based.

After Henry Frick's death in 1919, his daughter Helen channeled her energy into turning the Frick Library into a premier centre for scholarly research. Frick’s private collection was one of the most coveted in the world, but it was the library built by his daughter that pursued his goal to encourage and develop the study of the fine arts, and to advance the general knowledge of the arts. Once crowded into the Frick mansion’s bowling alley, the library moved in 1935 into a 13-storey structure designed for the purpose. Because we have examined the Frick Collection in lectures, I knew all about Frick, his daughter and the library.

I had been very interested in The Monuments Men since reading Robert Edsel's book The Monuments Men: Allied Heroes, Nazi Thieves and the Greatest Treasure Hunt in History, (by Hachette Books) back in 2009. Let me repeat. The Monuments Men were a multinational group of 350 men and women who volunteered for military service in order to protect monuments and other cultural treasures from destruction during WW2. In civilian life, many of them had been museum directors, curators, artists, architects and educators. These dedicated men and women tracked, located, and ultimately returned to their rightful owners more than five million artworks and cultural items stolen or destroyed by the Nazis. Their role in preserving Europe’s architecture and cultural treasures was without precedent.

But I had forgotten about The Frick Art Reference Library's involvement in the team's projects!

The story of the Monuments Men in Europe has become better known, but few are aware that another group of dedicated art historians were engaged in the fight for European art, in the USA. In 1943 William Dinsmoor, Columbia professor and Chairman of the American Council of Learned Societies, established the Committee on the Protection of Cultural Treasures in War Areas. Supported financially by the Rockefeller Foundation, the team consisted of 30 volunteer American and European scholars. 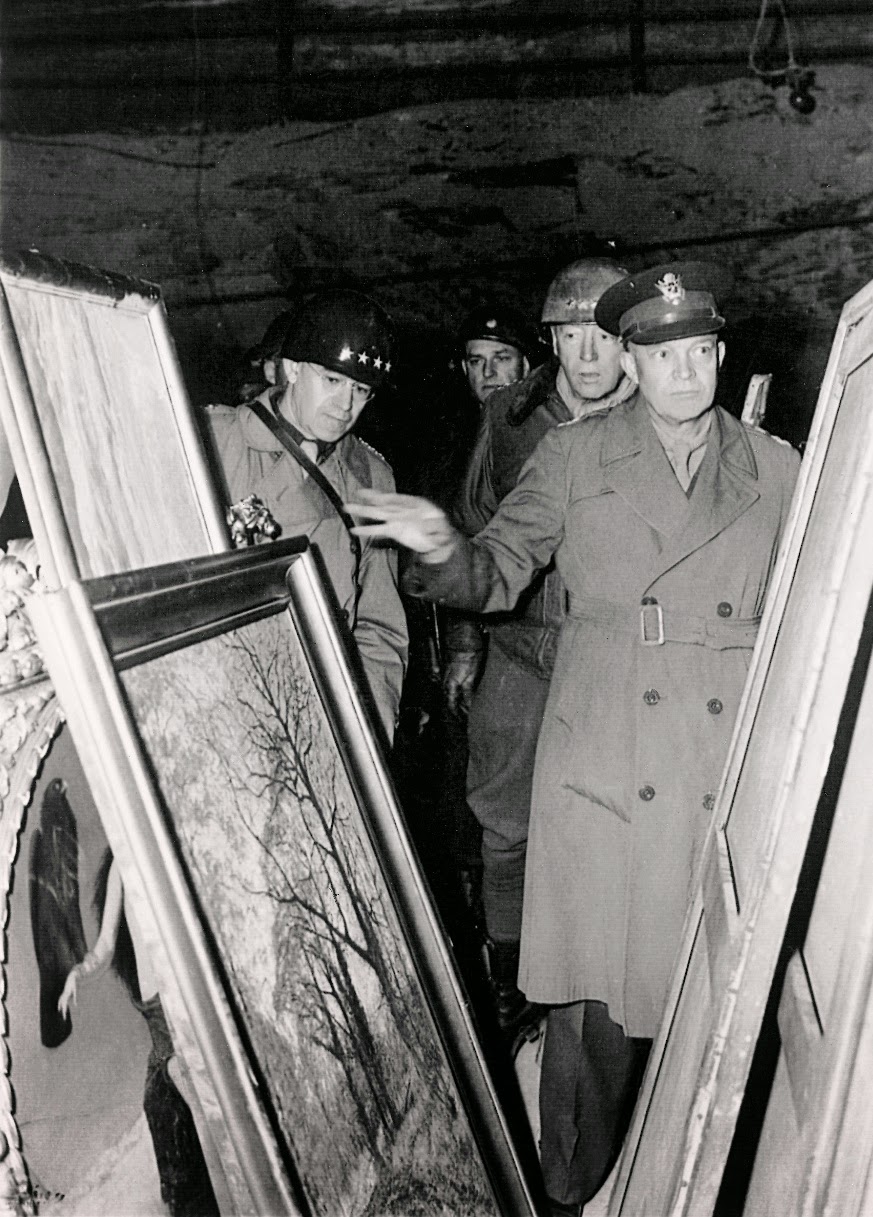 
Headquartered largely at the Frick Art Reference Library, which had been involved in the preservation effort by 1941, Dinsmoor’s committee was responsible for coordinating information gathered from diverse sources and compiling it into a master index and photo archive. The index listed the historic buildings and important works of  art in each occupied country.

Library director Helen Clay Frick invited the Committee of the American Council of Learned Societies on Protection of Cultural Treasures in War Areas to take up residence at the Library from 1943-45. Working alongside art historians and other experts on the Committee, Frick librarians and photographers prepared the vital information. Once the maps and lists of monuments were completed at the Frick Library, they were distributed to the Allied armed forces in Europe, to spare the art treasures during bombing raids.

In 1943 the library closed its doors for six months — the only time in its 93-year history that it has done so — in order to support the committee’s research. Meanwhile, over at the Metropolitan Museum of Art, they were closing at dusk for fear of visitors stealing pictures in a blackout. And every night, the Museum of Modern Art was moving paintings to a sandbagged area, then rehanging them in the morning. The Frick Collection itself was blacking its windows and skylights so that enemy bombers could not spot it in the middle of Manhattan. Many thanks to Robert Edsel's own blog for this information. 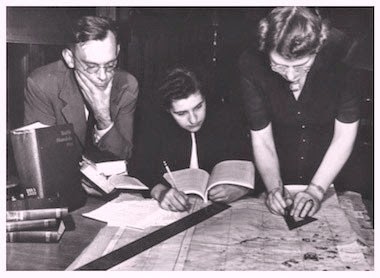 Members of the Committee of the American Council of Learned Societies on the Protection of Cultural Treasures in War Areas, working on a map of Paris at the Frick Art Reference Library during 1944. Photo credit: The Frick Collection

Even before the end of hostilities, the Frick staff and its resources also played a vital role in the research needed for the recovery of stolen and looted art, which became a top priority of Dinsmoor’s committee and its parent Washington-based Commission for the Protection and Salvage of Artistic and Historic Monuments in Europe. Indeed, still today, with the help of the Frick Art Reference Library’s vast resources, researchers continue to piece together information to help reunite works of art and their rightful owners.

Most of the art thefts occurred in 1936, in time for the Degenerate Art exhibitions in Munich, Vienna etc. When the Frick became involved in 1943 to 1945, perhaps it was too late to track the pre-war art thefts in Europe.

Hello Hels, This is a fascinating story, especially considering Frick's connection with the art world. Usually, today we are reading how major collections are trying to get away with not returning looted art.

I find the general problem of tracing art objects through wars and disasters quite absorbing and important, although this is affected by political, pecuniary, or humanitarian issues.
--Jim

The USA didn't join WW2 until 1942, so it would have been inappropriate for the Frick to have been involved any earlier. In any case, the American Council of Learned Societies were compiling lists and preparing maps of the most important works of art to be protected from battle, not chasing art thefts.

I also find the problem of tracing art objects after wars very important. And although the The Committee on the Protection of Cultural Treasures in War Areas of The American Council of Learned Societies had no responsibility for locating and returning stolen art, their records proved invaluable in the decades after WW2 ended. The Frick Library is still a super source of data today!

"The Monuments Men were a multinational group of 350 men and women who volunteered for military service in order to protect monuments and other cultural treasures from destruction during WW2" - You know, what really bugs me? That when Baghdad was "liberated" there was protection for the oil ministry while the OLDEST treasures of human civilzation were looted right next door. I wonder why no one, in this age of even more enlightenment (???) has thought of a similar rescue mission at the beginning of this new millennium. In fact, while we have High Commissioners for Fugitives and this that and the other - why is there no salvage mechanism for mankind's collective heritage?

the oldest treasures of human civilisation were indeed looted right next door to Baghdad and few people did anything about it. But I would say that was typical. Consider when the Institut d’Égypte in Cairo was destroyed in Dec 2011. Or the 6th century buddhas of Bamiyan were blown up in March 2001 by the Taliban.

I read and loved The Monuments Men: Allied Heroes, Nazi Thieves and the Greatest Treasure Hunt in History by Robert Edsel.

I saw the film and did not love it. In fact I rarely love films based on books I have already read.. the films manage to both trivialise and glamorise these historical events :(

Thanks for ones marvelous posting! I really enjoyed reading it, you could be a great author.I will always bookmark your blog and will eventually come back in the foreseeable future. I want to encourage continue your great work, have a nice morning!

Thank you. I never know how to respond to a general comment. Have you ever been to the Frick library?

"I would say The Monuments Men Project saving treasures was the freak event."...or even a Frick event? sorry, couldn't resist.

Although trivialised and Hollywood's version of history, I thought it was quite a good movie.

Let me start by saying this paragraph gave me goosebumps over my entire body: "ultimately returned to their rightful owners more than five million artworks and cultural items stolen or destroyed by the Nazis. Their role in preserving Europe’s architecture and cultural treasures was without precedent ". Powerful stuff indeed!

I know about this story only because we recently saw the film. I enjoyed the film but enjoyed learning about the huge effort that went on behind the scenes. Never mind the internet, I think even my generation takes for granted the huge efforts in catalogues and classification that came before us.

I didn't know that there had been blackouts in America. Do you know if that was just the east coast or across the country?

I didn't know anything about fear of being bombed in the USA either. But I read "The Roberts Commission and the Power of Art During World War II".... an excellent reference.