There was a great to know about the French actress Sarah Bernhardt (1844–1923). Consider her:

1. rather tragic childhood with an unknown father and her half absent mother
2. being sent to a Catholic school and converting from Judaism to to Catholicism
3. connection to Duc de Morny and Alexandre Dumas, and growing passion for the stage
4. training at the National Cons­ervatory of Music
5. travel around the world with her troupe

6. love affairs, the men she wanted to marry and the men she did marry
7. diverse roles as an actress, tragedienne and entrepreneur
8. art nouveau posters
9. use of modern technology including photog­raphy, mechanised printing procedures and then the intro­duction of colour etc etc

But something I knew nothing about was the Divine Sarah’s skills as a sculptor and painter. The National Museum of Women in the Arts in Wash­ing­­ton DC noted that while acting, 25 year old Bernhardt began studying sculpture in 1869 with Mathieu Meusnier and Emilio Franchesci, and became passionately devoted to the art.

By 1874 she was exhibiting her work at the very prestigious Paris Salon, a pleasure that she continued to fulfil for 12 years. Exhib­itions of the art­ist’s sculpture were held in London, New York and Philadelphia. Bernhardt later partic­ip­at­ed in the World’s Columbia Expos­ition in Chicago in 1893 and at the Exposition Universelle in Paris in 1900. 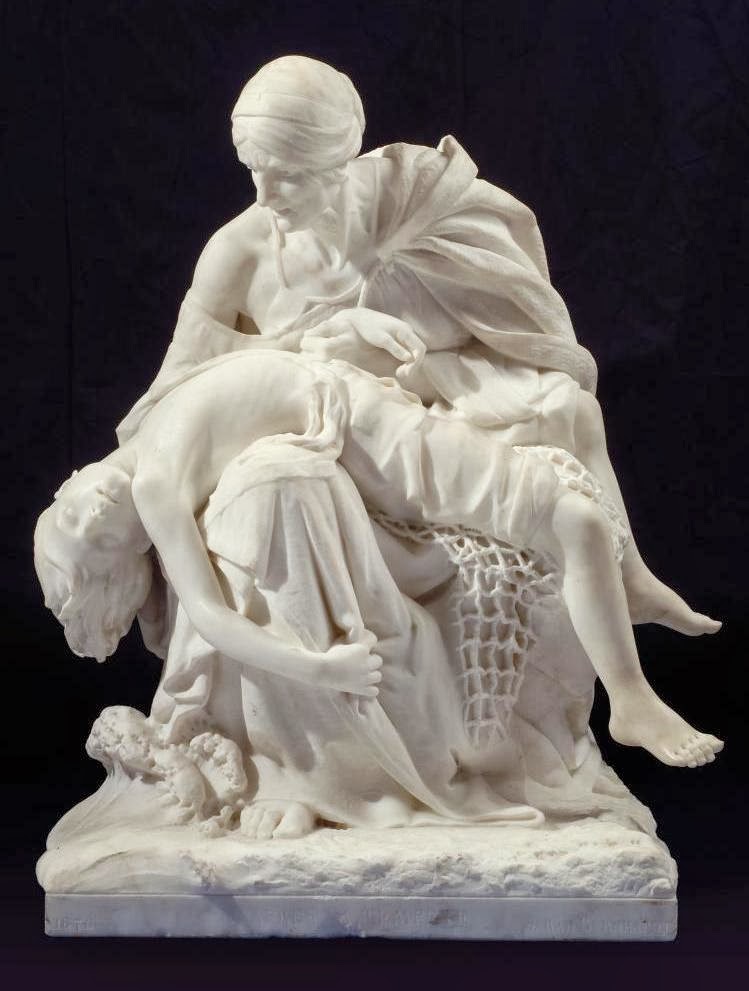 After the Storm showed a heartbroken Breton peasant woman cradling the body of her dead grandson who had been caught in a fisherman’s nets. Sarah Bernhardt had seen this woman on the seashore and was moved by her tragic story. The artist studied anatomy, specifically to convey the intensity of the subject. Her ability to render textures from smooth skin to rough nets added to the naturalism of the piece. Had Bernhardt studied Michelangelo's Pieta where the Virgin Mary supported the dead Christ on her lap?

Four years later Bernhardt sculpted a less classical, more fantasy-based bronze inkwell. The Museum of Fine Arts in Boston noted that the mysterious Self-Portrait of the Artist as a Sphinx was perhaps a metaphor for her ability to transform herself, on stage and in life. The combination of the body of a griffon, bat wings and a fish tail seemed to be inspired by contemporary Art Nouveau ornament­ation. Note the Tragic and Comic masks as epaulettes on the sphinx’s should­ers, presumably depicting the model’s profession as actress. In any case, Bernhardt was at that stage rehearsing for Le Sphinx, a melo­drama by Feuillet. 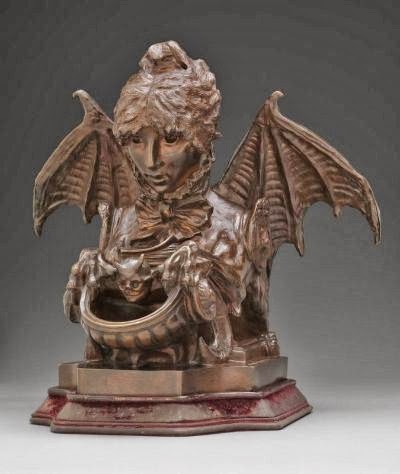 Borrowers and Lenders Journal agreed about the Bernhardt’s changing priorities. She became so caught up in the creation of sculptures that she was tempted to give up her stage career. In 1873, unhappy about her work at the Comédie Française and physically unwell, she decided to take a studio and devote herself to sculpture. As she explains in her memoirs: "As I was not able to use my intelligence and my energy in creating rôles at the theatre as I wished, I gave myself up to another art and began working at sculpture with frantic enthusiasm".

Clearly she recovered from her grim mood. When the Comédie Française appeared in London in 1879, the exhibition at the William Russell Galleries on Piccadilly showed 5 of Bernhardt's sculptures. The ex­hib­ition was popular, and the art critic for The Times wrote a satisfyingly positive review. Among those who attended the Lon­don exhibition were the Prince and Princess of Wales, Sir Fred­er­ick Leighton, President of the Royal Academy, and William Gladstone who was prime minister, on and off.

Bernhardt excelled at modelling, and the majority of her sculptures were portrait busts, though she also made smaller objets de vertu. Indeed Bernhardt must have been very busy sculpting – the sphinx self portrait was one of six complex pieces she exhibited at the 1893 Chicago World's Fair. Fifty of her artworks have been documented but apparently only 40 can be located today. Where are the others; shut away in private collect­ions?

What does not surprise me is that, since Bernhardt was passionate about all forms of the visual art, she took the time to paint or supervise sets, design dresses and direct her own theatre company for her productions - non acting roles. We have many early 20th century examples of people in theatre companies hopping from one of the visual arts to another. The Ballets Russes was particularly keen to encourage the collaboration of modern artists like Leon Bakst, Pablo Picasso and Henri Matisse in the design of sets, costumes and posters.

Dear Hels,
What an interesting post about a very interesting woman. I really enjoyed reading it. The only other thing that I did know was that in later life she had to have one leg removed. I remember being told this when a child.
Her sculptures are no mere dabblings of someone with artistic yearnings, but rather show someone with a real talent!
Kirk

Sarah Bernhardt made an enormous impact on the crowds and critics in Melbourne and Sydney. People were still talking about her years later.

Well, we have certainly learned something here. What a fascinating account of what was definitely a most interestingly creative woman.

What a very talented woman she was. The sculpture of the woman with the child is truly remarkable. Not only is the sculpture technically wonderful but the emotion conveyed is touching. A true artist!

Now I wonder if you knew that on 15th March 1900 Sarah Bernhardt played the role of Napoleon's son in the premiere of L'Aiglon by Edmond Rostand at the Théàtre Sarah Bernhardt! In 1901 she appeared in the same role in London. Rostand, the author of Cyrano de Bergerac, wrote the play especially for her.

I hope you will excuse the Napoleonic reference!

Incidentally I wonder if you have come across another great French actress from a similar poor background, Rachel Félix, whom I have blogged about: http://johntyrrell.blogspot.co.uk/search/label/Rachel%20Félix.

it is not often I am surprised by the content of my own blog posts, particularly if I thought I knew the subject well. But Sarah Bernhardt continues to delight.

she really did lose a leg in 1915. The accident happened on stage but once gangrene set in, I suppose there was no choice but to amputate. She was already quite a mature-age woman by then (71).

Amazing! In July 1891 the star’s arrival in Sydney emptied State Parliament and caused wild scenes at Redfern station where she was received like royalty. The Mayor left his duties to meet her and took her to an official reception. The harbour was fully decorated, and lit up at night.

The sculpture of the woman with the child was so skilled, at first I wasn't sure that Sarah Bernhardt actually sculpted it. After all, she was extremely well trained for the stage and hugely successful. Why would she attempt a difficult art form in which she had virtually no training?

She was a true artist, as you say!

she played every important and dramatic role in history, male and female, young and old. I did not know about Napoleon's son but the King of Rome was only 21 when he died. So Sarah Bernhardt must have been totally amazing to pull that one off.

I will look up Rachel Felix, thank you.

Hello Hels, I had heard about Bernhardt as a sculptor, but somehow I had imagined her as a dabbler, and the works somewhat amateurish. So I was not prepared for the imagination, workmanship and finish that went into these works.

By the way, the end of her career coincided with the beginning of films and records, and some of her performances are now on Youtube.
--Jim

Nod. A person has to be at the right place (France) at the right time (post 1895) to participate in a sparkling new medium like cinema. But it was a risky undertaking, I suppose, especially as she was no longer young.

But bless her heart. Some eight films were made, her career in the cinema ending only with the catastrophe that was WW1. Then she died a couple of years after the war ended.

have a look at Peter Stewart's story in France Magazine.

Alexandre Dumas Senior (1802 – 1870) got around a bit. He married French actress Ida Ferrier in 1840. He is alleged to have had up to 40 mistresses and fathered at least four illegitimate children, one of whom (Alexandre Dumas Junior 1824 – 1895) also became the famous playwright and novelist.

Alexandre Dumas Sr certainly put himself around. He loved women, including the lovely Lola Montez:
http://melbourneblogger.blogspot.com.au/2011/04/lola-montez-her-tragedies-and-joys.html

But his son Alexandre Dumas Jn did not seem to like or approve of women very much, at least in his writing.

Hello,
Some correction on your very interesting post:
She knew his father but that this had not recognized her
she's got no training at the National Conservatory of Music, but in the "Comedie Française"
just one husband Ramala
Sarah plays Phèdre and is already known in 1873, but it's true which she'll buy her workshop from Clichy this year However her 1/2 sister is very sick and she'd died.

Sarah was an exceptional woman and for those who think that she's of another time, say you that if she still lived she would move with the times

Sorry for my english

many thanks.... your English is perfectly clear :) I wish I could write in my second language as well as you do.

The only query I have is the unknown father. It seems that even Sarah's mother was not sure which of her clients made her pregnant. The surname Bernhardt was a combination of the maternal grandparents' names.