Women artists who had previously struggling to establish their art careers, now emerged and bloomed, at least from the late Victorian era on. We ask the following questions:

1. Did women do well in the arts because of a generalised increase in support for feminisim. Or did the women artists pre-date and perhaps encourage the growth of feminisim?

3. Did any male artists start to depict women differently?

4. Art offered the possibility to women of public self-expression. But did women artists specifically support the organised Women’s Movement? And vice versa?

Here is something of an answer, at least for the first and fourth questions. After years of research, the Castlemaine Gallery’s curator has brought tog­ether a stunning collection of works by artist Dora Meeson from public and private collections all over Australia. Showcasing Meeson’s impressive ability to capture the differing moods of her favourite subject, the Thames, the  Shimmering Light: Dora Meeson and the Thames exhibition celeb­rates the pioneering spirit of this once much admired London-based Australian. We may not instantly recognise her name now, but by 1919 Meeson was famous - she was elected as a member of the Royal Institute of Oil Painters in London! 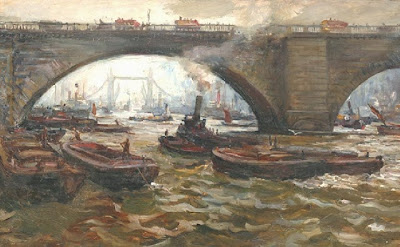 Dora Meeson (1869–1955) was a student at Melbourne's National Gallery School and then at London's Slade School. Australian artist George Coates (1869-1930), who had once conducted drawing classes in his Swanston St studio in Melbourne, met her at the Académie Julian in Paris; they were engaged in 1900. Why did they not marry until June 1903, in London? It seemed that both husband and wife agreed not to have children and to devote themselves instead to their art full time.

Meeson and Coates had adored Impressionist art in France, especially Caillebotte, Renoir, Sisley, Fantin-Latour, Monet. Even in London, they were still reminding each other about how the Impressionists' fragmented brushstrokes captured the nature of air and water changing with the light. 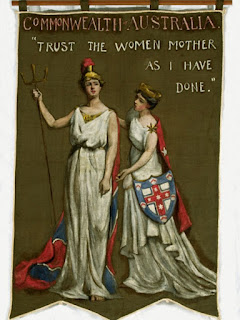 Meeson's suffragette banner
"Trust the women, Mother, as I have done"
1908

After a few years of marriage, the young couple rented Augustus John's studio in Bohemian Chelsea where they became close friends with a large number of Australian expatriate artists. As an extra source of income, Coates produced black-and-white illustrations for HS Williams' encyclopaedic and historic texts.

How appropriate that Meeson was an active member of the British Artists' Suffrage League. She designed and painted the banner which was first used in a suffragette parade in 1908 and subsequently at later demonstrations in London. The banner depicts a young woman personify­ing Australia implor­ing a mature woman representing Britain to Trust the women, Mother, as I have done. The banner was presented to the women of Australia as a Bicent­enary gift in 1988 and is on now on permanent display in Parliament House, Canberra. A representation of her banner was later used on the design of the Australian 2003 dollar coin, celebrating the centenary of women's suffrage across Australia. 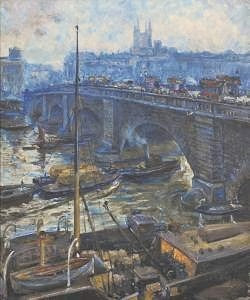 Neither Meeson nor Coates responded to developments in art after impressionism and their work remained entrenched within the limits of carefully crafted, realistic art. There does not seem to be any acknowledgement in their paintings of Fauvism, Cubism or any of the other late-Edwardian or post-Edwardian art movements booming across Europe.

Yet Meeson did not concentrate on Edwardian family picnics and ladies socialising in white tea-dresses. She remained best known for her busy images of the River Thames, probably reflecting her socialist and social conscious­ness. In 1911 she spent the summer near the Surrey Commercial Docks, painting en plein air - in changing weather, lighting and events. Her works may have been impress­sionistic, but the labour she depicted was gritty and masculine. The river was crowded with shipping, warehouses, traders and labourers.

A number of her Thames paintings were acquired after WW2 by the Port of London Authority.

Sarg. Coates enlisted in the Territorial Royal Army Med­ical Corps in 1915 and served as an orderly at the 3rd London General Hosp­ital. While not an official war artist, he did many portrait commissions for the Australian War Memorial. Coates also painted portraits of Canadian war heroes. 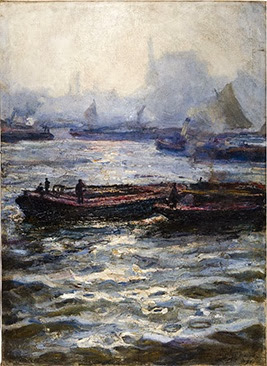 Readers might like to locate an article, written by Myra Scott, called How Australia led the way: Dora Meeson Coates and British Suffrage. It was published by the Commonwealth Office Status of Women, Canberra in 2003. For Thames River images, read the Shimmering Light: Dora Meeson and the Thames catalogue, published by the Castlemaine Art Gallery in 2013.

Great post, never heard of her but a real talent, thanks

When is an artist an Australian-living-abroad and when does she become British or French. Or does it depend on her accent. Or where she did high school and art training?

The best permanent British collection is the Port of London Authority. It has four special Meesons, starting with Grain Elevators in the Surrey Commercial Docks, 1911. Have a look, if you find yourself in the city for any reason.

*nod* it is often a problem, identifying an artist by nationality. Especially Dora Meeson:

Clearly Meeson lived most of her life in Britain. But her friends were often Australian and she returned on holiday to Australia as often as possible.

a most enjoyable read Hels. Did you say that there is and Expo of her work at Castlemaine?

Yes. Castlemaine's Art Gallery is closing the exhibition after the 10th Nov 2013. Joe and I zipped up to Castlemaine especially for Dora Meeson - worth it!

Hello Hels, These are wonderful paintings. I see some relation to the starkness and grayed palette of the Ashcan School paintings in America. Meeson's simultaneous depiction of light and mist is remarkable.

It was fun standing in the one, huge exhibition space, being surrounded by Meeson's Thames River paintings. I too wondered what the inspiration might have been. Monet's spontaneous brush strokes, but far too industrial. Turner's busy waterways but none of Turner's dissolving forms. Ashcan School's starkness.

Most of the paintings I loooked at seem to have come from the 1911-1925 era. I wonder who Meeson's intended market was.

I think your anonymous commenter has touched on the nature of the serial expat! I simply don't know whether I'm British or South African anymore and having dual nationality doesn't help my identity crisis.

I'm appalled to admit that I don't even know any female artists. All the art I do know and admire is by male artists. I need to rectify that. Am glad to say I at least know female musicians and authors.

I feel the same way about the Bauhaus architects who left Germany in 1933. They continued with their Bauhaus work in Britain, Czechoslovakia, USA or France, and had strong German accents for the rest of their lives, yet their identity became very confused.

Re women professionals, their work has always been neglected, overlooked, attributed to their husbands or debunked. It takes a number of PhDs and exhibitions to restore those women to their rightful place in art history.

I'm glad it's not just me then who has had to make a concerted effort to acknowledge these women!

Hello again. I immediately thought of your post when I saw this article on Georgia O'Keeffe's New York Paintings, with some of the same subject matter as the Meeson ones. All of these paintings seem to transcend stereotypical feminist conceptions--at the very least, I am updating mine.
--Jim
p.s. Maybe we can add to this genre some of the stark and industrial photographs of Margaret Bourke-White, whose early career incidentally was in Cleveland.

Curses! The O'Keeffe link didn't appear. Here it is:
http://ephemeralnewyork.wordpress.com/2013/11/18/the-modern-metropolis-of-georgia-okeeffe/

The East River 1928 looks industrial and macho, doesn't it? Not impressionistic particularly, but full of ships, factories and bridges.

Ooohhh I love blogging... thank you for the reference.