The City of Paris preserves the two houses where Victor Hugo (1802-85) lived the longest, one in Paris itself and one on the island of Guernsey. In addition, there is a third home that I want to discuss -  his holiday home in Normandy.

1. Hôtel de Rohan-Guéménée in Place des Vosges in Paris was where for 16 years (1832-48) Victor Hugo rented a 280 square-metre apartment on the second floor. Hugo was 30 when he moved into the Hôtel de Rohan-Guéménée with his wife and their four children. By this time he had already triumphed with one play, and had enjoyed widespread success with his great novel Notre-Dame de Paris.

I mentioned the importance of the Parisian Victor Hugo House Museum in an earlier post. It is in this apartment that he wrote some of his im­por­tant early works, along with some of Les Misérables, the beginning of La Légende des siècles and part of Contemplations. During this period, this clever creative man became a member of the Académie Française, as well as a peer of France and a member of Parliament.

2. Hugo loved holidaying in Fecamp, on the English Channel coast. And he loved staying at a very grand house in the small Normandy town of Villequier, built by the wealthy Vacquerie family. Victor Hugo and his family first stayed with the Vacqueries in 1839 and so it not surprising when one of the Vacquerie sons married Victor’s daughter Leopoldine in Feb 1843. The two extended families enjoyed a warm friendship.

A great tragedy occurred in the family in September 1843 when Léopoldine, her brand new husband Charles and two uncles were drowned in a boating accident on the Seine, near the family home. All four were buried in the cemetery of Villequier. Victor’s very moving poems after 1843 tell of his annual pil­grimage to her grave in the town.

Museum of Victor Hugo Villequier was opened in the Vacquerie’s home in 1959. Letters from Leopoldine to her family, portraits, family furniture, Victor Hugos’ sketches and views of contemporary Normandy fill the home. The young couple's tomb and the statue of Victor Hugo near the site of the accident complete the Museum. 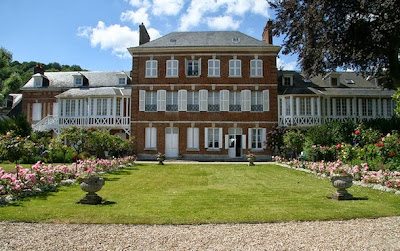 3. Victor Hugo lived in exile for 15 years (1856-70). He left Paris because Louis Bonaparte/Napoleon III seized complete power in 1851 and established a non-parliamentary const­it­ution. Hugo openly declared Napoleon III a traitor to France, so the writer had to flee the country to avoid arrest. But Brussels was not going to be safe enough, so in 1852 Hugo moved on to Jersey (with other opponents of the new French regime). The island was close to France geographically, but was a British Crown dependency. 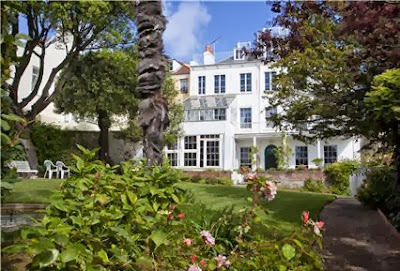 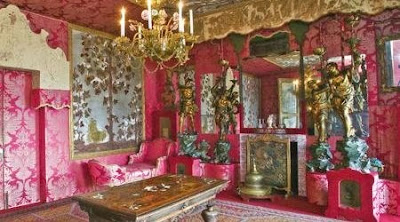 In Oct 1855 Hugo moved to another British island, Guernsey. He was immediately captivated by Guernsey: he was struck by the ocean, the harshness of its cliffs and the gentleness of the flower filled landscape. In 1856, he published his book of poetry called Les Contemplations and with the proceeds he bought Hauteville House.

So his third house was Hauteville House in Saint Peter Port on the is­land of Guernsey. Today we can still see the large white building with a garden overlooking the sea. And we can still see his collection of furniture and decorative art pieces that he bought locally eg carpets and ceramics. Converting the house for his family’s usage was a time-consuming, energetic labour of love.

In March 1927 Hauteville House was donated to the City of Paris by the poet’s descendants. The house has been preserved exactly as it was, including Hugo’s very personal decorative schemes. This year the house was awarded the Maison des Illustres label by the French Ministry of Culture, recognising the building’s cultural value to French herit­age. Visitors can tour Hauteville House from April–September inclusive, except for Sundays. 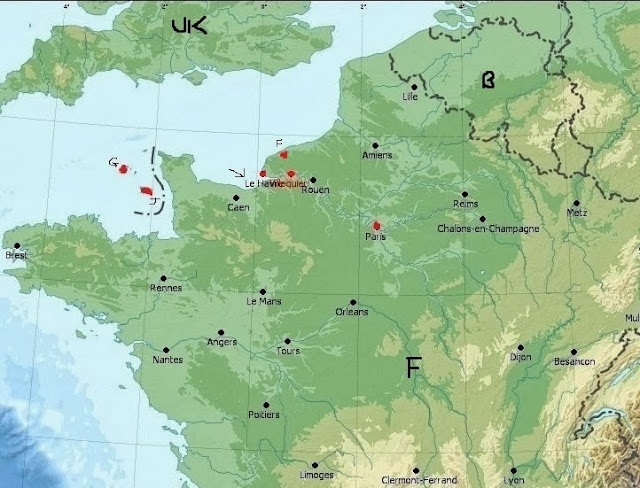 See the islands of Guernsey (G) and Jersey (J), as well as Fecamp (F), Villequier and La Havre.

Many thanks to Paris Musees for the details of Hugo's sites and their contents.

I knew nothing about Guernsey so it was a surprise when the guide suggested Hauteville House. Great fun.

Hauteville House, inside and out, must have been very comfortable for the family, especially since they were escaping a dangerous political situation. The landscape too was attractive.

But I wonder if a man of letters needs to be surrounded by other thinkers and writers. And top quality libraries.

Hello Hels, There is a good lesson here that a beautiful house, although it can add to one's life, cannot by itself create happiness or shield one from tragedy.

I wonder whether these houses individually or collectively affected Hugo's writing content or style?

good question! The cottage in Chawton where Jane Austen lived during her maturity is now Jane Austen's House Museum. The home where the Bronte sisters lived and died is now the Bronte Parsonage Museum. Both homes tell us a great deal about the authors and about how the houses influenced their writings.

I have read only Hugo's most famous pieces and then only in translation. It would be valuable to ask a French-speaking Hugo scholar about the three homes.

He certainly had great taste in houses.
I think it was Churchill who said something like:
we make our homes, and thereafter they make us.
I am living in the house my father designed. If this quote is true, it's a wonder I am not in an asylum by now.

If a house is to become a personalised home, most of the structural work has long been fixed and changes are largely interior. Hugo spent a long time in Hauteville House so we can expect to see more of Hugo's preferences installed in that house.

Thanks for reminding me...I will add a photo of the Hauteville House interior as soon as I find one. You may want to forgive your dad, after you see Hugo's taste :)

I had no idea about the connect between Hugo and Guernsey but I'm not surprised he fell in love. My friend went there for a weekend visit last year and had moved there by the middle of this year.

I also didn't know about his daughter. How tragic.

there was something delightful about the Channel Islands - French atmosphere, British democracy, gorgeous landscape, amazing seascapes and sweet tax rates (even in Hugo's time).

No wonder your friend fell in love with Guernsey. The islanders had an appalling time during WW2 but the rest of the time, life has been good.

"Victor Hugo: Les Misérables – From Page to Stage" is an exhibition starting at the State Library from mid July-November 2014. The library has many objects that explore Hugo's life and times, as well as the spinoffs his literary project has produced.

Many thanks for the link to the exhibition. My son, in the tourism business, found a restaurant called Café Hugo in Place Des Vosges. I don't know if Victor Hugo ever ate or drank there, but it is next to Hôtel de Rohan-Guéménée where Hugo lived from 1832-48. The architecture is appropriate and the food is apparently wonderful.