Colonial Film talked about the romantic excitement in which the British Raj held pig-sticking, noting that this kingly sport in India began only in the early 1800s, and grew out of the decline in bear-sticking and bear hunting with dogs.  Under pressure of hunting the bears retired to the heavy forest, with wild boar quickly replacing them as the game of choice, being both plentiful and good sport. Strong, fast and aggressive when threatened, the characteristics of wild boar rendered it ideal game, both from a sporting and moral point of view – the boar was a combination of speed, cunning and ferocity who fought to the end with the utmost courage…a very brave opponent. 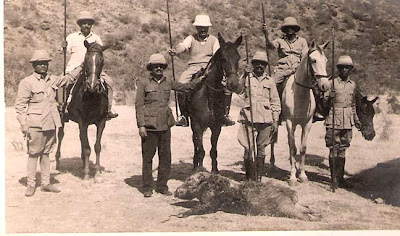 The hunters on horse back with their spears

In introducing the imperial sport of pig-sticking, The British Empire and Commonwealth Museum has amazing footage of the annual Raj sporting event, the Kadir Cup Meeting. The museum suggested that the earliest of the pig-sticking tent clubs seems to be the Poona club, founded early in the C19th. And as the century progressed, the event was held annually in Meerut near Delhi, taking place over three days and drawing increasingly large and excited crowds. Country Life magazine called pig-sticking a national obsession in the British Raj, the Wimbledon of its sport.

Each hunter on horseback carried a 6' spear which was grasped near the butt-end and used overhand, driven down at close quarters into the hog. Umpires supervised the hunt and the first rider to hold up a bloodied spear progressed to the next round in the competition.

The most famous winner (in 1883) of the Kadir Cup was Sir Robert Baden-Powell who wrote a book on the sport called Pig-Sticking or Hog-Hunting: A Complete Account for Sportsmen - And Others, published in 1924. Lord Baden-Powell was a lieutenant-general in the British Army in India and Africa, and was the founder of the Scout Movement in 1906. People took notice of his opinions.

One of his chapters was titled Pig-Sticking’s Value to the Indian Civil Service. Here the author suggested that the sport offered a model of the panacea that the Raj might need, for on the pig-sticking field it could be shown that the white man and the Indian can be mutually good friends and comrades where they have a sport in common. The Indians could learn about teamwork, authority, planning and responsibility. The Indians, in return, could share their knowledge of local geography and of local wildlife.

The British Empire and Commonwealth Museum noted that the sport was associated with the higher echelons of the military and colonial administration, and was seen as an ideal pastime to aid in the improvement of the colonial classes. In colonial India, in particular, young officers out of Britain had to get accustomed to the heat. Pig sticking discouraged young men from the "morally deleterious escape to higher altitudes" in the hot season, so that the long, hot nightmare season became instead the healthiest and happiest part of the year.  And this sport took the young civilian out into his district, allowing him to enter into ‘friendship with his headmen, which cannot be got through official correspondence and chuprassies’. 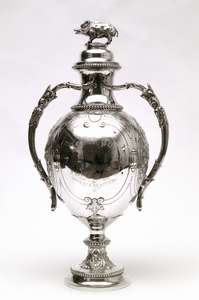 The grand prize, Kadir Cup, with a wild boar on the cover

The 1934 footage from Colonial Film acknowledged that while the more serious literature showed how quickly a fun pastime could be invested with the utmost symbolic gravity, the purely hunterly writing about the sport was more straightforward about the other connected pleasures. The film provided a less varnished picture of the sport in its Imperial context, providing evidence of the luxuries the pig-sticking set expected to enjoy when at a hunt meet or just out for sport with a riding mate.

Wonderful photos of the post-hunt moment are available in Africa Hunting. The men are beautifully groomed, fully dressed and lined up in proud rows. The vanquished animals lie in a row in the front of each photo, trophies from a very successful day out. So which was the most important moment of the entire day - the preparations, the event's starting horn, the frantic chase or the first kill? I would suggest the post-hunt photos, complete with trophies.

I found this post difficult to write because I do not even eat meat, let alone spear wild boar for sport. Yet it is important for us to understand the practice. And its meaning in colonial India.

And could the expression "bleeding like a stuck pig" have originated in this sport?

Bleeding like a stuck pig has more to do with _intentionally_ slashing a pig's artery in an abbatoir so that blood teems out.

But Britannica says an angry wild boar is a desperate fighter and therefore the pig-sticker must possess a good eye, a steady hand, a firm seat, a cool head and a courageous heart. This seems the _cool opposite_ of wildly slashing at arteries and blood gushing everywhere.

Hello Helen:
We find it very difficult to understand any 'bloodsports' and this is but one example. However, its place in history is certainly intriguing.

We find the whole period of the Raj in India of immense fascination, particularly as one of our grandparents was born there and so one feels a very real connection to that time and place.

This has been a most interesting read. Thank you.

I don't have any family connection to the Indian Raj, yet I find it fascinating. Almost all my (8) posts on Indian history deal with pre-Independence subjects.

Having a close family tie must be amazing for you. I hope the grandparent concerned left diaries, photos and every other relic, so that you can do your own Who Do You Think You Are?

Several points (and I'm a vegetarian too). Pig sticking is not uncommon in Spain and Europe but as far as I know unknown in Britain (boar hunting disappeared a long time ago). I always understood that pig sticking was an Indian tradition that originally hunted bears but used pigs when they ran out. It seems to have started in Bengal.

"morally deleterious escape to higher altitudes" Those hill stations must have been a lot of fun.

Wild pig killing is alive and well in Australia, and as in India, they make a formidable opponent. They are a terrible pest here, well, one of many.

thank you. That further proves that everything has a history - nothing is born de novo.

I can well imagine that people everywhere hunted for meat, and then made a bit of a sport (with competition rules) out of their day out as well. But they ate the meat they caught and didn't take more pigs/bears/wild boars than they needed.

Pig sticking competitions seemed to have gone way beyond hunting for dinner with some sport attached. The Kadir was an event of imperial sumptuousness, more like a circus. Judges, music, silver cups, colourful uniforms, huge crowds, fame.

which is the "terrible pest" in Australia? The wild pigs or the hunters?

The "morally deleterious escape to higher altitudes" quote is from Baden Powell. WHAT WENT ON IN SIMLA each summer, for goodness sake? Women, not their wives? Men? Booze? Gambling? Sleeping in?

"Pig sticking"? What a euphemism. Some boys never grow up, as William Golding pointed out many decades ago.

This reminds me that it is not pigs, but mankind that is the greatest pest for other animals.

I think I can explain why pig sticking discouraged young men from the morally deleterious escape to higher altitudes in the hot season.

During the worst of summer, mountainous Simla was home to wealthy senior officials of the British colonial government, senior Indian army officers, and the womenfolk of the men who stayed on the job in the hot towns. The presence of many single, or apparently single, people must have made Simla the centre for bed hopping.

Thus the moralists preferred vigorous sport, between men, over bed hopping in the mountains.