At the Modernity in German Art 1910-1937 Exhibition at the NGV in Melbourne this year, I read an amazing piece of historical information. The huge and popular Munich Degenerate Art Exhibition of 1937 was not the first of its kind, as I had firmly believed. The forerunner of Munich, called Reflections of Decadence, had been held in the inner courtyard of the Dresden Town Hall in Sep-Oct 1933. How amazing!

Jacqueline Strecker noted that Dresden was already a conservative city politically and that the newly appointed director of the Dresden Art Academy was even more conservative. The Lord Mayor of Dresden was dressed in full Nazi uniform when he toured the exhibition in 1933.

But what does it mean when we note that the first decadent art exhibition was put on by the Nazis in 1933 and not in 1937?  Simple... the Nazis had clearly worked out their ideology as soon as they came to power! Thus no one in Germany could say in 1933 that they didn't realise what Nazism was going to mean for the country and its citizens.

The Reflections of Decadence exhibition from Dresden eventually toured to at least eight German cities between 1934 and 1936, before it was finally incorporated into the much larger and more infamous Degenerate Art Exhibition held in Munich. I don't have a catalogue from the Dresden show, so it is difficult to track the individual works of art by name.  But I do know two of Dix's paintings, The Trench (1923) and War Cripples (1920), that appeared in the Dresden exhibition. 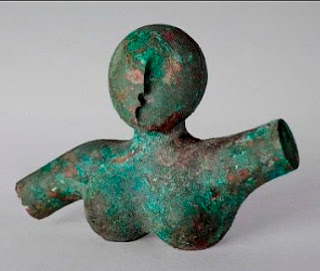 Further information about this elusive 1933 exhibition came from a most unlikely source. During archaeological excavations carried out in Berlin in 2010, 11 pieces of modernist art were unexpectedly dug up and revealed. Created between 1918 and 1930, these bronze and ceramic sculptures by Marg Moll, Emy Roeder, Edwin Scharff, Naum Slutzky, Karl Knappe, Gustav Heinrich Wolff, Otto Baum and Otto Freundlich had been declared degenerate and had been put into the Dresden exhibition.

Given that some 21,000 art works produced by Cubist, Expressionist, Dadaist, Fauvist, Surrealist and New Objectivity artists were about to be removed by the Nazis from museums, sold abroad (eg auctioned in Lucerne) to earn foreign exchange or thrown onto a bonfire (1,004 paintings), no-one had expected any of the 1933 art horde to be intact. I would love to know how these works ended up in a Berlin subterranean hidey hole. Was it a fan of modernism, hiding the works from Nazi predators? Or was someone so disgusted by modernist art that he/she buried the pieces to destroy them?

Some of these Dresden exhibits went on to be part of the infamous Nazi propaganda exhibition in Munich eg Marg Moll’s Dancer c1930, Emy Roeder’s Pregnant Woman 1918 and Otto Baum’s Girl Standing 1930. Were the other modernist artists (Käthe Kollwitz, Ernst Barlach, Emil Nolde, Franz Marc, Otto Dix, Ernst, Max Beckmann, Gerhard Marcks, Paula Modersohn-Becker, Paul Klee, Oskar Kokoschka, Otto Nagel, George Grosz and Karl Schmidt-Rottluff) not identified at degenerate as early as 1933? I am sure they were, but so far there is no evidence that their art was included in the Dresden exhibition. Or perhaps sculptures survived underground for 70 years or more, but paintings perished. 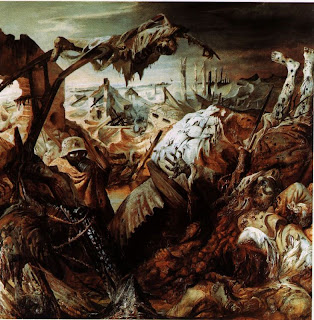 Dix, The Trench, 1923. Bought by the Wallraf-Richartz Museum, Cologne.

Bernd Reinhardt and Sybille Fuchs asked what made the Nazis respond so aggressively to modern art? The outlawed artists were accused of having fought on the side of artistic degradation during the years of Russian and Jewish assault on German art. The Nazis developed their hostility to modern art in the shadow of the unstable Weimar society, whose middle classes felt battered by crisis and sensed imminent disaster. This art offered a glimpse of how "international" the world had become, and it reflected the world’s contradictions and fractures. Naum Slutzky, whose 1931 sculpture of a female bust (see photo) was found in the Berlin excavations, worked with the Bauhaus in Weimar. The Nazis thought his bust was ugly, Jewish, anti German, internationalist, modernist and did not reflect well on German women. What was worse for the Nazis, Slutzky was Russian born and educated.


The 11 art works dug up in 2010 offer a glimpse of the cultural wealth and vibrant artistry destroyed by the Nazis. They also point to the gaps that the thefts caused in museum collections. Fortunately some of the lost art objects can be seen in Steven Spielberg Film and Video Archive.

An amazing story. I absolutely love the verdigris patina on the Slutzky sculpture. Assuming that it originally had a polished finish, its burial perhaps improved it.

To be fair, other societies repudiated contemporary art they they could not understand or that did not coincide with perceived national ideals. In America, much art was ridiculed, de-funded, banned and destroyed, such as the Mapplethorpe photos, and some well-publicized pieces that seemed critical of religion, including the "Piss Christ" by Andres Serrano, and the Virgin Mary painting by Chris Ofili. Still, these were individual reactions, never reflecting a national effort to control and censor all art, though at times coming dangerously close.

This has been such a fascinating trail - don't apologise - great new information. All I can add is a good post I saw on Otto Dix whose work was included in the shows.

Hello Hels:
One does, indeed, wonder how such works came to be buried. We should like to think that it was someone at the time with a real feeling for contemporary art who was, in fact, saving the pieces until such time as the political climate altered. Whatever, your whole post reinforces the horror of German history during that time.

Here, until very recently, contemporary artists were either supported by the state, and their work put on display, tolerated, but their work not shown, or totally banned.

I was disturbed to discover that there an organisation in the US called the "Art Renewal Centre" which publishes articles and letters critical of Modern art, using much the same derogatory language and ignorant arguments used by the Nazis.

Naum Slutzky was a brilliant designer and craftsman. But his fatal error was learning his design skills at the two places the Nazis despised the most: Wiener Werkstätte and the Bauhaus. Plus he was a Russian and a Jew. Thus his career was doomed from the moment the Nazis came to power in 1933. Fortunately he fled to Britain and survived the war.

I will come back to your second point shortly.

I would like to follow up on one point. "In the years leading up to the time of Hitler, Dix’s anti-war paintings became more and more controversial and eventually Dix was forced to leave his position at the Dresden Academy".

Does that mean he was unpopular before the Nazis came to power in 1933?

Jane and Lance, and Parnassus,

I realise every nation on earth has always been concerned about what sort of art, music, theatre and films its citizens are exposed to. This would probably seem reasonable to most people, at least as far as protecting children.

And I take particularly notice of what you say about contemporary artists being either supported by the state, and their work put on display, tolerated, but their work not shown, or totally banned.

So it is just a matter of degree? In most countries the government puts limits on who can see controversial works, or withdraws those works altogether.

In Fascist or Communist countries, the government takes works it disapproves of out of every gallery in the nation, to burn or to sell off. Then the so-called degenerate artists can be banned from every working again.

Fascinating, thank you. I had not heard of the Art Renewal Centre either. Yet their mission statement sounds reasonable eg to disseminate the rich artistic heritage of 2500 years of accumulated knowledge in creating traditional, realistic images touching upon universal and timeless themes. After all... what is there not to love about Alma Tadema and Tissot?

Hi Hels. I was initially delighted to stumble upon the ARC website, because of its extensive gallery of 19th century art (much of which I love) but reading the articles and letters gave a completely different picture. Any artist with left wing leanings, such as Picasso, is dismissed as worthless.

The ARC executive advisor writes:
“Frida Kahlo could not paint worth squat. She was a primitive. A primitive is someone who knows next to nothing about painting, but tries anyway. She was an accessory to Diego Rivera, another primitive more highly rated than his talent warranted. The concept of greatness is demeaned when unworthy people are called great.”

And from the ARC faq:
"Q: Aren’t you just advocating Nazism? After all, Hitler loved realist art.
No. Obviously. Hitler wore pants. Does that make anyone who wears pants is a Nazi too?
What Hitler knew (and Stalin too!) was that good art has the power to communicate with people in important ways and that what he called “degenerate art” didn’t. In that he was right about that even though he was horribly wrong about a host of other things. Hitler also used good artistic expression as a powerful tool to promote his Nazi viewpoint but it is the message, not the medium that was flawed."

I could go on but it's too revolting.

Thank you (if that is the right word).

I had no trouble finding quotes from OTHER organisations, citing the Art Renewal Centre eg
"The Jew establishment promotes their own modern art which is insane, hideous and tries to replace beautiful, traditional western art. But on the web there's a site called Art Renewal Center, which promotes mainly beautiful victorian art, which I think is the greatest art ever made. The jew establishment hates victorian art and acts like it doesn't exist. The art history books basically skip over victorian art" (White Pride World Wide).

It would be interesting to know how the Art Renewal Centre responds to Fascist usage of their project.

One hopes that the ARC would distance itself at least from the white supremacist wing of Eurocentrism.
But by seeking to polarise opinion on art, and politicise it, as they clearly do, they have only themselves to blame if they attract a far right nutbar cheer squad.

Thanks for the post by the way. I love the verdigris too, even if it's not very modern.

the gods must be smiling on us. The Barbican exhibition says it is the first comprehensive showing of Bauhaus work in all its forms in the UK! Good grief, Bauhaus went from 1919-33 and it took until 2012 to get it all together?

At least the Barbican exhibition (May-Aug 2012) will be brilliant. And timely!

from the white supremacist wing of Eurocentrism and of American fascism. The ARC seems to be based in New Jersey and has Approved Ateliers in or near the USA.

By the way, if you ever thought that Australian art history was exempt from such attacks, you would be sadly wrong. Have a look in my blog for the name of famous art historian Lionel Lindsay. I have come back to this theme many times in the past.

I must admit. I was wrong too. Thanks for this correction.

Goodness knows I have made mistakes before, in writing but especially in lectures. I apologise, laugh and move on. But not knowing about the 1933 exhibition changes our perspective on Degenerate Art.

As far as I had known, Goebbels had told his art experts in 1937 to clear all public galleries of any art that "insults German feeling, or destroys or confuses natural form, or reveals an absence of adequate manual and artistic skill" - not much information to being making decisions on. 16,500 works were hurriedly culled and seized.

In fact a very detailed theory base for good and bad art had been worked out by the time the Nazis came to power in 1933. Every single academic, curator and auctioneer would have been crystal clear about Nazi policies from the beginning. Nothing was rushed or half-baked.