Modern Woman: Daughters and Lovers, an exhibition of drawings from the Musée d'Orsay in Paris, is on view at the Queensland Art Gallery in Brisbane from March- 24th June 2012. The famous French artists of the late C19th and early C20th who celebrated the changing roles of women during the Belle Époque included Edgar Degas, Pierre-Auguste Renoir, Edouard Vuillard, Camille Pissarro, Pierre Bonnard, Auguste Rodin and the occasional woman artist like Mary Cassatt and Berthe Morisot. For a complete list of artists whose works were included in this exhibition, see QAG.

It is not coincidental that so few women artists are represented in the Modern Woman exhibition. Since the Ecole des Beaux-Arts did not admit women until 1897, all the female art students in Paris had to find an alternative, less prestigious school that would accept them. Or, if their families had plenty of money, some women students were able to study privately with an established male artist. Fortunately Académie Julian, founded by Rodolphe Julian in 1868, accepted women; but even there the male students and female students were trained separately.

Worse still was the constant chaperoning that women artists had to endure. Berthe Morisot mother’s totally banned her from going to unsuitable places (eg dances, winebars, cabarets, the beach) and chaperoned her when she went to suitable places. Artist Marie Bashkirtseff was forbidden from participating in Paris’ cultural night life, never being exposed to the wonderful events that male artists used as themes for their own art works. 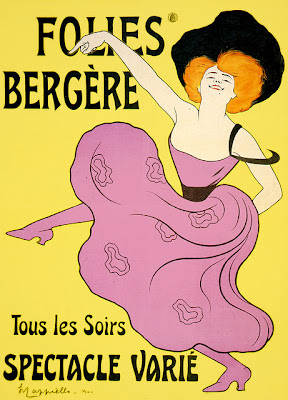 What holds the various artists and styles together? Firstly, as the gallery points out, modern artists increasingly moved away from idealised representations of the female figure. In particular the artists abandoned the idea of the female as a goddess, virgin or idealised allegorical figure.

For art to be truly modern, it had to reflect its own era. So the gallery’s third aim was to show French society going through a radical change in political, social and artistic life. For those who had a reliable income, life was musical, optimistic and colourful. Women didn't have the vote yet, but their lives were becoming more valued and meaningful. Science and medicine were improving rapidly.

Of course in 1900 they didn't know that industrial-strength massacres were just around the corner (in 1914). It is no surprise that the drawings for the Brisbane exhibition came from Musée d'Orsay, housed in the former Orsay Railway Station in Paris. The works were selected from the 10,000 drawings of d'Orsay's graphic arts collection, a collection visited by millions of people each year. If any one city was going to sum up all that was special about late C19th culture… it was Paris.

I agree with Angela Goddard, curator of Australian Art in Brisbane. The image of woman, in all its ambiguity and diversity, became the face of modernity. And in the immediacy of these drawings, we can glimpse a sense of the fleeting sensations that characterised La Belle Époque.

A number of reviews have noted that this exhibition concentrates on drawings rather than the larger works in oils by Renoir and his colleagues. Thus, they suggest, we are provided with a more intimate portrait of the people and times, and especially the changing roles of women. Is this true? Are drawings more intimate by definition?

What I did not like was the apparently intimate title Modern Woman: Daughters and Lovers. These women were definitely not the daughters of the artists, a fact that becomes clear from some rather sexy images of women getting undressed, lying in bed and washing in the bath. The models in the art works may have been someone's daughters and lovers, but to the viewer they were ordinary, modern women, going about their daily life in bustling Paris. And surely that was the entire aim of the exhibition. 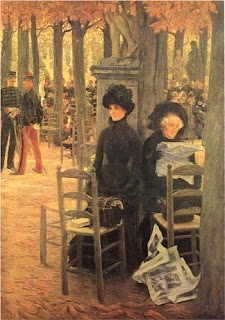 In one of those super feats of timing, Fashion Is My Muse is currently displaying the art works of James Tissot. Tissot left London for Paris in 1882 and reintroduced himself to his countrymen with an ambitious and provocative series of 15 pictures entitled La Femme à Paris. La Femme á Paris showcased the modern Parisian woman during the very period of rapid change that the Brisbane exhibition was interested in, the late C19th. Tissot’s series illustrated women from a range of income levels and occupations, rendered in precise detail using high key colours. Hopefully these Tissots are in the Art Gallery of Ontario, Toronto.

Hello Hels:
Notwithstanding the title of the exhibition, which probably can be interpreted in a number of different ways, this sounds to be absolutely superb and something, given the opportunity, we should very much wish to visit.

What the exhibition clearly does, alongside much else, is to place women at the centre of a modern, at the time, changing society and one which, at the conclusion of the 1914 - 1918 War, could never go back on itself.

We are inclined to think that drawings, as opposed to paintings, do make for a greater feeling of intimacy - perhaps because they are most often less 'worked' and more spontaneous.

What a great exhibition, even if rather misleading. I work a lot with women impressionists and artists on face book and I've found more than I originally though.

Sounds like a great exhibition, but I understand your hesitation regarding the title. The title sounds like a case of branding the product with a sexy title to boost sales.tyur

I'm not so sure that it was a bad idea for parents to keep their daughters away from those bars, cabarets, etc. Today we nostalgically look on them as innocent and colorful symbols of the Belle Epoque, but I'm sure they harbored real dangers as well.

The constant attention on those places in paintings, books and movies may focus a greater emphasis on them than they really held back then. Mary Cassatt has given us many images of tender motherhood, but between such innocence and the potential depravity of the cabarets, there was a whole gamut of activities in which women (all people in fact)in reality spent most of their time and which would be worthwhile depicting.

Perhaps this is another way of saying that if the women artists had been welcome in the cabarets, then the cabarets would not have been the same type of exotic places we enjoy viewing in impressionist pictures.

hi,
I like this blog,great exhibition very nice collection. thanks for posting!!
Modern Art

Bless your hearts! It sounds right that drawings would make for a greater feeling of intimacy for the reason you stated i.e because drawings are most often less worked that paintings and more spontaneous.

Does it give a more intimate portrait of the city during the Belle Epoque? Viewers will have to judge for themselves.

grab the catalogue, if you can. Well worth it.

The impact of impressionism on late 19th century must have been almost universal. I am now looking at German expressionist art in the years before WW1 and it jars my eye. One expects impressionism.

nod....this would not be the first art exhibition in the universe where branding the product with a sexy title was intended to boost visitor numbers. But I get annoyed anyhow. I like to think *cough* that art is above *cough cough* such commercial considerations.

You are correct, of course. Those absinthe dens were horrible and prostitution was everywhere. And of course parents worried about their daughters (but not their sons, apparently).

The result was clear. Male artists were painting images from EVERY single aspect of Parisian life. The female artists were reduced to mother-baby portraits and afternoon tea at the married sister's house.

Life was improving for women, but not all women felt the changes equally.

My pleasure. If you live in Australia, it would be well worth travelling to Brisbane for the exhibition.

Thank you very much for this post. It's a beautiful exhibition which I enjoyed very much and well-worth seeing. I also enjoyed the films which show the contrast between the fashions of the wealthy women of leisure and the clothes of the women in the factories. Some of the latter were reasonably well-dressed, I thought!

I agree with you about the title. It certainly gives the wrong impression but I hadn't thought of it before.

as a young woman in the Handicrafts of Asia decades (the 1960s), I disdained bourgeois concerns like women's fashion and jewellery.

Now I find it a] a delight in its own fashion sense and b] historically revealing. How we change :)

‘Berthe Morisot: Woman Impressionist’, a landmark exhibition of 60-70 works, begins a journey from the Musée national des beaux-arts du Québec, continuing to the Barnes Foundation (Oct 2018–Jan 2019) and to the Dallas Museum of Art and the Musée d’Orsay in Paris next year. André Gilbert of the MNBAQ tells us that the task was difficult, because the works are so scattered. But the collectors have been unusually willing to lend, feeling that the exhibition is overdue, perhaps by many decades.

I have seen very few Morisots in the past, and never in one site. So this exhibition is indeed long overdue and I look forward to seeing the works in Musée d’Orsay Paris. I hope there is an excellent catalogue for museum visitors to buy... even art-savvy people know far more about Manet, Monet, Renoir and Degas than they know about Berthe Morisot.