Portmeirion, Wales - a delight for all

Portmeirion is located on a peninsula, just south of Porthmadog in North West Wales. From the hotel, the visitor can see Tremadoc Bay, nestling in the far larger Cardigan Bay. The River Dwyryd passes the village, leaving a wide sandy expanse at low tide. At high tide, the waters reach right up to the coastal paths, changing the cut-off land into an island.

The small settlement that existed on the peninsula was called Aber Iâ. When a mansion was built there in c1840, it took the place's name, Aberia. 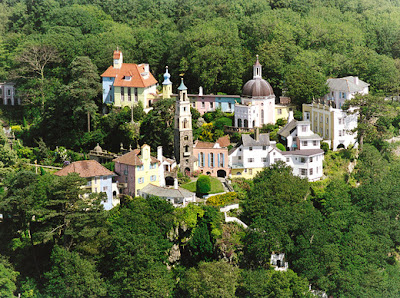 Portmeirion from the air

The English-born and educated, Welsh architect Sir Clough Williams-Ellis (1883–1978) bought Aber Iâ from his uncle, Sir Osmond Williams. As a professional architect, Clough’s goal was to take a naturally beautiful location and develop it, without spoiling the landscape, river, sands, coastal paths and views that made the site so special. Inspired by the Mediterranean-like setting, like his favourite Italian resort Portofino, Clough was passionate about the protection of national parks and the preservation of fine old buildings. 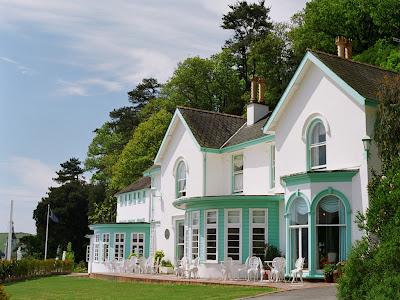 Clough started to establish Portmeirion as a Mediterranean coastal hotel resort in 1925. The splendid 19th century mansion was converted into The Hotel Portmeirion which opened in 1926 to Clough's design and has been the focal point of the village ever since. The curvilinear entrance, that housed the reception area, was added in the 1930s.

Clough soon began building or converting some extra cottages, to give additional accommodation. The Mermaid and White Horses cottages were improved and the main building programme continued until WW2. The remains of the semi-derelict harbour structure Fort Henry still exists, having been designed by Clough for bathing, boating, suntanning and socialising. 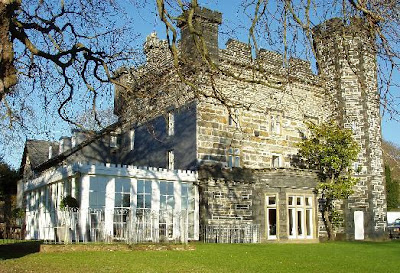 After WW2, construction continued for 20 years so today there are many more buildings within the Portmeirion village. There was a fortified Victorian mansion called Castell Deudraeth, near the hotel complex, that Clough would have liked to incorporate into the village. Alas it didn’t happen until after the original dreamer’s death – Castell Deudraeth underwent major renovation in the 1990s and re-opened in 2001 as an 11 bedroom hotel and restaurant. Its architectural heritage has been preserved, including the welsh oak and slate floors, baronial stone fire surrounds, oak panelling and plasterwork cornices.

However Clough did live long enough to be knighted for his services to architecture and the environment, in 1971. Portmeirion’s grounds are now designated a Conservation Area and most of the buildings have been Grade II registered.  The Ship Shop, for example, was originally the stable block for the Aber Iâ estate, built c1850.

But this is no ordinary village. Virtual Tourist says the place was built to a slightly smaller scale than was usual with inter-war developments, and although the self catering cottages are all real and the exquisite little shops and tea rooms are open for business, nobody actually lives there. Employees staff it and tourists throng to it, but residential guests are the only visitors Portmeirion allows overnight. At night the gates are shut and paying guests are free to roam through their own private dreamland. It's wonderfully romantic and is a splendid base from which to explore North Wales. 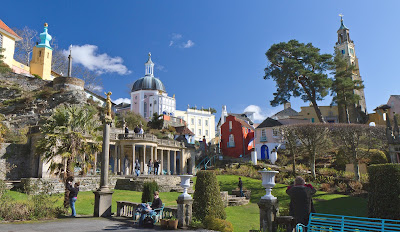 I have run into the Williams-Ellis family in my research twice before, in totally different contexts. Firstly Clough’s wife, Amabel Strachey, was a cousin of author and Bloomsbury figure Lytton Strachey. Her parents were friends of other members of the Bloomsbury Group and Rudyard Kipling was godfather to one of the children.

Secondly Clough Williams-Ellis and his wife had a number of children. Their elder daughter, Susan Williams-Ellis, used the name Portmeirion Pottery for a ceramics company that she created with her husband in Stoke-on-Trent in 1961. To tie Susan’s history back to Portmeirion village, visitors will find a shop specialising in Portmeirion Pottery. Susan and her husband Euan also designed and painted the colourful mural of vines and cupids with a fountain and white doves on the courtyard side of one of the village's buildings, the Ship Shop.

I recommend the book Portmeirion, written by Jan Morris, Alwyn Turner, Mark Eastment and Stephen Lacey.  Published by the Antique Collectors' Club in 2006, it aimed to cover the whole story of Clough Williams-Ellis, the village, the extensive gardens both at Portmeirion and at the Williams-Ellis family home and Portmeirion Pottery. 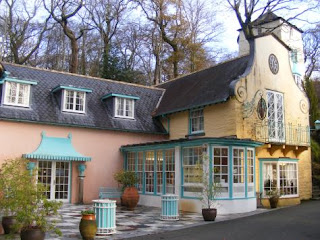 The Ship Shop (above)   Portmeirion beach and tower, by Christine Matthews (below)
* 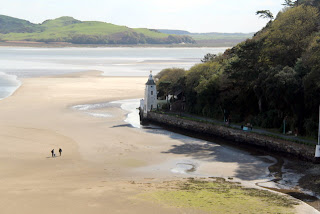 Wow, Hels! I've never heard of Portmeirion before now but I am quite sure that I would absolutely love it. It looks like a photographers dream!! My dad loves Wales, I shall have to convince him to take me there next year.

Delightful is the word. I would like to be transported to there.

It is said that Soldier Clough Williams-Ellis had been horrified by the destruction and savagery of World War One. His vision was of building an entire village set in a remote and tranquil setting, limited by nothing but his fantasies. I think he achieved that.

I thought Portmeirion was a bit like a romantic fantasy, prepared in advance by Walt Disney's set designers. But remember Patrick McGoohan in The Prisoner from way back in the 1960s and set in Portmeirion? That is why it feels theatrical

The Wiki entry has some stunning panoramic views and I must add 1966-1967 when Patrick McGoohan returned to Portmeirion to film exteriors for The Prisoner, a surreal spy drama in which Portmeirion itself played a starring role as "The Village".Thus is still remembered here and the village was even used in Doctor Who as it was considered so exotic.

although I remember most series from the 1960s, I hadn't visited Portmeirion back then and so it slipped my mind. But I know what you mean about romantic fantasy.

nod.. I should add a landscape photo or two. There is nothing quite as lovely as the romantic sea, the secluded beaches and the woodland walks.

My maiden name is Welsh, although I've never pursued the history. I may just well adopt this as a starting place to see the country.

Excellent :) I have done several years of British history in high school and a full undergraduate history and art history degree at uni. Yet all that education seemed to have concentrated on England and Scotland. What happened to Wales?

Some extra background Hels. Yes, I can imagine someone feeling like that.

Did you know that Patrick McGoohan film his 1960’s cult TV series, The Prisoner, at Portmeiron… probably the most famous cult series ever shown on TV.

Also discovered that it has been used for some scenes from Dr Who, Brideshead Revisited and Ingrid Bergmans Inn of the 6th happiness.

Although I did not know that some scenes from Dr Who etc were filmed at Portmeirion, it does not surprise me in the least. The set designers wouldn't have had to design sets - they were already perfectly set up before the crew even arrived :)