As 18th century started, splendid country homes in Britain had formalised French gardens with straight lines and clipped everything. But as the century progressed, English landscaping became influenced by the landscape paintings that thousands of Grand Tourists had loved in Italy. Claude and Poussin’s view of the Roman Campagna inspired naturalistic garden design by the great landscaping names of the era - Charles Bridgeman, William Kent, Lancelot Capability Brown, Henry Holland and Humphrey Repton. 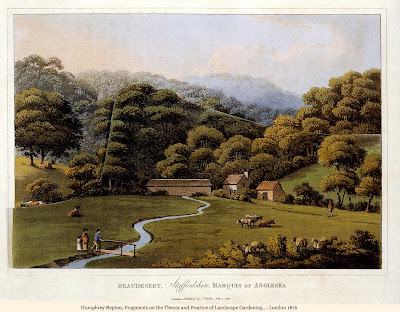 Beaudesert, Staffordshire, a painting by Humphry Repton.
Found in Fragments on the Theory and Practice of Landscape Gardening, 1816

The aristocracy wanted to build for themselves a peaceful Arcadian world that looked as natural and unplanned as God originally made it. The popularity of Capability Brown (1715-1783)’s serpentine style peaked in the 1760s and 1770s. So by the time Capability Brown died in 1783, he had bequeathed rural Britain an unbeatable legacy.

His design successor in the next generation was Humphry Repton (1752-1818) from Bury St Edmonds. Repton had written to many people he had known while he was living in Ireland, and had offered his services as an Improver of the Landscape. He soon had steady work including working on Cobham in Kent and Ashridge in Hereford. Sheffield Park Garden in Sussex, a beautiful location all year, was the result of both Brown’s work AND later Repton’s. The owners loved the lakes, cascades and waterfalls.

Repton went beyond the scope of Brown, to include a vision of the house itself and its place in the surrounding landscape. Sometimes that was literally so. In Sheringham Hall Norfolk, for example, Repton had responsibility for some of the architecture, as well as for the landscaping. 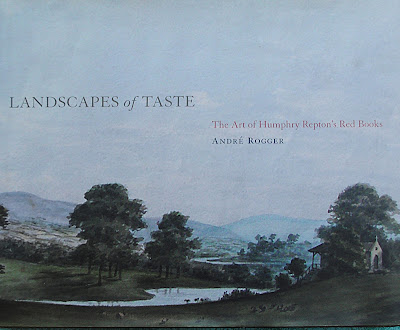 Landscapes of Taste,
written by André Rogger in 2007.

Repton coined the term Landscape Garden to describe the natural style of gardening which he felt required "the united powers of the landscape painter and the practical gardener." He introduced a softer Italian style to the English country homes, adding terraces, gravel walks, trellises, fountains and separate flower gardens. [Capability Brown would not have been pleased]. Repton also replaced the earlier classical ornaments with romantic structures like grottoes and fake ruins. We can best see this trend in the largely unchanged Repton gardens at Betchworth House Surrey.

In a sense, then, Humphrey Repton was the link between the Natural Landscape of the earlier decades of the 18th century and the return to Formality that characterised the end of the same century.

While designing a landscape for a client, Repton always created a Red Book of the estate. This was a slim volume bound in red leather and presented to the client. It contained Repton’s proposals for changes, outlined in copperplate and filled with maps, plans, drawings and water-colours to illustrate his ideas. More than a hundred of the Red Books survive, a clear indication of their importance to Repton’s 18th century clients.

I want to mention only four estates and therefore four Red Books. Repton said that one of his more important commissions was for Stoneleigh Abbey, and in his Red Book for that project, he expressed the quality of the site: “I look upon Stoneleigh Abbey as a place not to be compared to any other. Of course he WOULD say that, especially in a book that was handed to the proud owner of Stoneleigh. Sheringham Park in Norfolk received a similarly ringing endorsement. In his July 1812 Red Book, Repton described Sheringham as his favourite and darling child in Norfolk. Advertising hype was not invented in the 1950s!

I would love to have seen the Red Book for Sheffield Park Garden, had one survived.  Repton certainly visited several times in 1789 and 1790, and seems to have concentrated his efforts near the house where he created the loveliest lakes. Instead, Tim Longville recommended that we examine the Red Book for Mulgrave Castle in Whitby. In it, Repton delighted over the effect of the romantic scene in the glens, with fresh water rivulets and cascades.

Repton is largely known to history because he created, transformed or improved 200+ country homes. So what role did the Red Books play? To Repton, the Red Book was his main working tool. To the home owner, the book was a step-by-step album, documenting progress towards the final, gorgeous landscaping product. And to landscape historians the Red Books are historical texts in their own right, allowing an entirely new genre of landscape appraisal.

Repton also wrote five important books (eg Sketches and Hints on Landscape Gardening, 1794) which were published using the most valuable material from his Red Books. Read Landscapes of Taste: The Art of Humphry Repton's Red Books which was written by André Rogger and published by Routledge in 2007. Here Rogger argued that Repton’s main artistic achievement was actually the text-and-image concept of his Red Books, NOT his gardens. 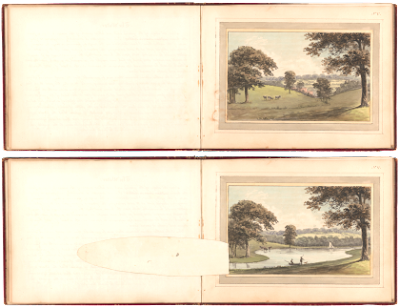 In the top watercolour painting of Vinters in Kent, Repton gave the original view of the estate. In the bottom painting, he presented a watercolour, pen and ink view of the same estate in the future, assuming his landscaping design was fully adopted.

England+gardens+history = Capability Brown. I knew nothing of Repton though. I liked what I saw of his skills.

nod... Capability Brown soooo dominated the Roman Campagna inspired naturalistic landscape style that it is hard to consider other designers.

Humphry Repton was always going to have an uphill battle, separating out a niche for himself, different from the Master. So he was very wise, moving in a slightly more formal direction. The terraces and trellises were clever; even the grottoes, fountains and fake ruins, which might have been a bit OTT, worked out well.

Hello Hels, I have put a TAG on your blog from my post.
Please have a look and hope you wil join in. DeeBee

thank you. I will have a look.

I was delighted to read the blog Georgian Gentleman who said that Repton designed his gardens, with the aid of his soon-to-be-famous red books, and then left it to others to implement the ideas.

Thank you for this - your posts are always filled with such great detail! One of my favourite topics; it is always so lovely to contemplate the English landscape.

Perfect post. This book sale I recalled would be a great buy:

spot on! great garden design is a joy in its own right. But when you see the gardens in conjunction with the architecture, it is even better. I assume that is what Repton meant when he wanted to include a vision of the house itself and its place in the surrounding landscape.

Hugely expensive (£3,595) of course, so I hope our state library has a copy. But I note there were only 500 facsimile reproductions made.

A] "A Tour Through Some Georgian Gardens of Note" in the blog called All Things Georgian:
https://georgianera.wordpress.com/2017/05/04/guest-post-a-tour-through-some-georgian-gardens-of-note/ and

B] "International Responses to the English Landscape Garden" in the blog called Geri Walton:
https://www.geriwalton.com/international-responses-english-landscape-garden/