With an ever-increasing European demand for sugar came the need for a larger work force and that need was met by bringing slaves from Africa to the Americas. Rum distilleries sprung up in the Caribbean and North America. This rum was then shipped around the Americas and to Africa where it was used to pay for new African slaves, bound for the sugar plantations of the Caribbean. The trade of slaves, molasses and rum was very lucrative. 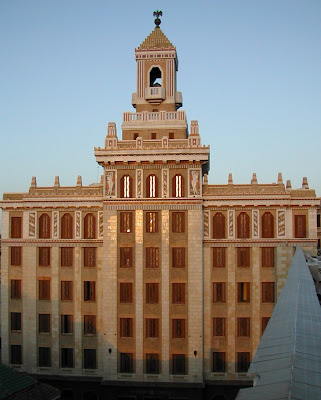 Emigrating from Spain to Cuba in 1830, Don Facundo Bacardi and his family worked hard establishing themselves as business owners in Santiago de Cuba. Life must have been brutal, but Cuba had become the largest producer of sugar in the Caribbean. In 1862 the family bought its own rum distillery in Santiago and called it Bacardi. When Don Facundo’s sons took over, the secret rum formula was improved even further. During the 1880s and 1890s Emilio Bacardí (1844–1922) and his family were heroic supporters of Cuban freedom and independence.

By the end of the century Cuba had become very wealthy from exporting sugar, rum, tobacco and bananas, and the tiny island was a ready target for predatory super powers. Hundreds of thousands of Spanish troops outnumbered the much smaller rebel army of locals who therefore had to use guerrilla tactics to save their own homeland. The Spanish military governor of Cuba herded the locals into fortified camps where a quarter of a million Cuban civilians died from starvation and disease.

Spain and USA declared war on each other in Ap 1897. A year later the war ended when the two countries signed the Treaty of Paris; Spain ceded Puerto Rico and other more distant islands to the USA. But what a nightmare for Cuba. From 1898-1902, and again from 1906–1909, Cuba was occupied by the USA. Under Cuba's new constitution, the USA retained the right to intervene in Cuban affairs and to supervise its finances and foreign relations! Self-government was not restored to Cuba until 1909. 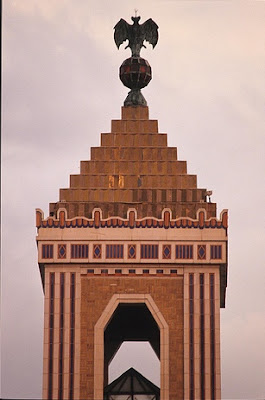 During the time of Prohibition (1920 on), Emilio Bacardi and the next generation of the family exacted revenge on the USA government. Cuba had become a popular destination for American tourists and by the 1920s the family was inviting those same tourists to come to Cuba to beat Prohibition at home. These were the boom years for Cuba, when Deco became the symbol of a vibrant future, with its distinctive buildings and colourful, extravagant shapes.

The Bacardi Building is one of Havana’s principal landmarks, standing on the western edge of the city’s historical centre. Its architect, Esteban Rodríguez Castells, originally won the international competition for its construction with a neo-Renaissance proposal. But after visiting the 1925 Exposition Internationale des Arts Décoratifs et Industriels Modernes in Paris, he completely reworked his design into the Art Deco style. Located on the Avenida de Belgica/Belgium, the Bacardi building of 1930 is one of Havana’s first sky scrapers (12 storeys high) and remained the highest point in Havana for a long time.

Cubaism described the building in great detail. The façade was lavishly decorated with red Bavarian granite, inlaid with brass embellishments. The upper floors and the tower, both raised in a pyramid shape, were of the exquisite and bright design that combined blue and dun stripes with bright gold panels. The upper part of the building was faced with glazed terracotta reliefs of geometric patterns, flowers and female nudes by the American artist Maxfield Parrish.

Its sumptuous interior details included blue mirrors; stucco reliefs; brushed and polished brass; mural paintings; mahogany and cedar panelling; stained and etched glass; richly coloured inlaid marble from Germany, Sweden, Norway, Italy, France, Belgium and Hungary. The lamps and other fittings throughout the building were of course in the most modern Art Deco style. The colour of the ceramic flagstones covering the upper floors was bright yellow, referencing the white and gold rums exported by Bacardi. 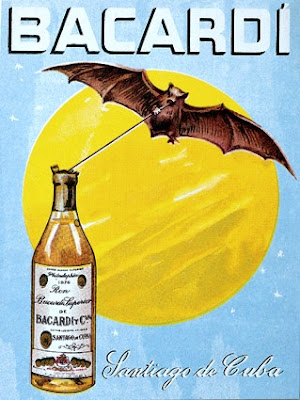 1930s advertisement for Cuban Bacardi Rum. Note the yellow and the bat.

The building’s central tower was crowned by a three dimensional Bacardi bat, a figure that appeared throughout the building. I presume Bacardi rum featured the Mexican free-tailed bat as its icon because the bats were great pollinators of the sugar cane and because they devoured the insects that damaged sugar cane. In addition, as would be found in any Art Deco building, the decorations included sun-bursts, fans, waves, spirals and geometric patterns, and Art Deco roses, pineapples and other tropical fruit. And there were many other Art Deco objects, both functional and decorative, like lamps, lift doors and iron grills.

The company opened rum production facilities in Mexico in 1931 and Puerto Rico in 1936, as well as the New York based imports company in 1944. After the Cuban revolution, the company moved from Cuba to its Mexico and Puerto Rico factories, and build new facilities and offices in the USA, the Bahamas and Bermuda. Bacardí family members were now reputed to be strongly right wing and anti-Cuba, having close ties to the American right wing and to the CIA. 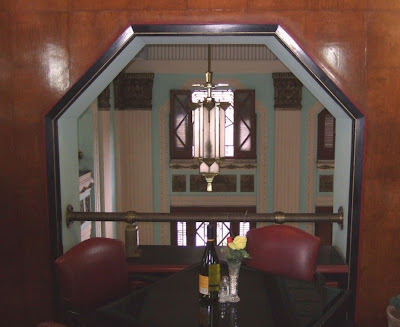 In any case there was no money in the island nation for supporting its architecture, once the USA's obscene and brutal embargo on Cuba started in 1960. There was barely enough money for the 11 million Cubans to have food and medicine. Buildings start to moulder and crumble, including the once beautiful Bacardi edifice.

In 2001 the building was largely restored by an Italian firm to its original condition, including beautiful marbles and Cuban Art Deco accessories. And then the work was completed in 2003 by the Office of the City Historian of Havana. The building is now the headquarter for representative agencies of tour operators. Visitors can inspect the lower floors and enjoy the bar located on the mezzanine floor, but cannot go up to the top storeys. 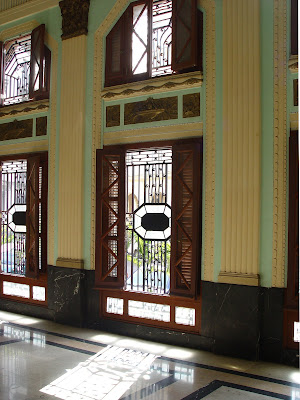 I have not yet seen the book Havana Deco, written by Alonso, Contreras and Fagiuoli. Published by WW Norton in 2006, the book explains the relationship between Cuban culture and the development of the Deco style there. The book places a heavy emphasis on Edificio Emilio Bacardi's exterior and interior because it serves as a good example of Cuba Deco.

Great that it was restored, but I wonder where the money came to pay an overseas company.

The Edificio Emilio Bacardi was fully restored in 2001 by Oficina del Historiador de la Ciudad. A list of the companies that participated in the restoration is included in the book, Havana Deco.

I read about this the other day. The architecture (and old cars) are wonderful and hope they all get restored. Another American disaster of course.

Havana must have once been an amazing city. What a shame the economic embargo against Cuba, led by the USA, led to grinding poverty and disintegrating architecture.

Hello Helen:
A splendid building indeed. We love the 1930's Deco look and are heartened to read that at least the majority of the building is in use today.

Russian friends of ours visited Cuba [a great attraction for them as they did not require a visa]and were most excited about their visit. We too should like to go there one day but understand that the corruption is appalling.

I think the polychrome ceramic decorations on the facade of the Bacardi Building were renovated beautifully, as were the windows, lifts, mirrors, lamps etc. It really does justice to the original Deco splendour of inter-war Havana.

However I wonder how much good Old Havana's listing as a UNESCO World Heritage site has done for all the other buildings.

As you probably know, many Canadians travel to Cuba, and the US at one time had passed a law to try and penalize us( anyone actually) as well for doing so. I think it eventually just either went away or has not recently been enforced.

What a beautiful building. I want to sit in that bar and sip a Bacardi!

That's incredible. Of course everyone knows Bacardi rum, but had no idea of that beautiful building in Havana.

Jim
agreed - beautifully designed in the first place and amazingly restored in the second.

Canadians have always been such sensible people!

The bar is soooo Deco and sexy, but you won't be drinking any Bacardi there. Bacardi lawyers apparently had a role in the USA's 1996 Helms-Burton Act (re the embargo against Cuba). Part of the 1999 Omnibus appropriations act denied trademark protection to Cuban businesses products redistributed after the Cuban revolution.

agreed. I wonder how many other architectural gems have been renovated already in Old Havana, how many await renovations and how many will simple crumble to death.

What a magnificent building this is and how wonderful to hear that it has been restored to its former glory. A colleague of mine recently visited Cuba and he came back ecstatic with the wonderful people he met there, the fantastic sights, the music and the amazing hospitality.
The whole US/Cuba relations shamble is deplorable...

When the Revolution started and for the first decades, Cuba was the hope of the exploited populations in the entire Western Hemisphere and beyond. During my Gap Year of 1966, largely spent with South American university students), Che and Fidel were the watchwords for a moral society. And it worked.

But decades of semi-starvation (caused by the USA), isolation and entrenched political power (caused within Cuba) made the dream fade.

I hope your colleague accurately picked up the mood in new Cuba. The Cubans have excellent reason be very proud of their history, music, food, tourism, architecture, education etc but there is a ton of rebuilding still to be done.

Hels, what a great post! I know a little bit about Cuba in the 50s and 60s and what you say above about how Fidel and Che represented the promise of the exploited world at one point. I am so glad they restored the building. I would definitely like to visit Cuba one day.

I would too. It would be like reliving my ideological youth again, but without the extreme 1960s left wing blinkers on :) Now I only wear moderate, thoughtful left wing specs :)

Ha ha. You remind me of the specs i wear when i look at South Africa. I call them my "it wasn't meant to be this way" specs.

Thanks for providing such an useful and informative information about Interesting Things. Glad to read it. Will bookmark your post and visit again for more informative post. Keep Sharing.
Exterior Architectural Millwork & Moulding in Florida

Welcome aboard. Since most readers will not get to Havana in person, blogs that celebrate architecture become a very important source of information.

it is comparable to most of the brands of the market. Most people don’t know about the history behind the flying bat logo on the Bacardi brand. Here we will discuss the same topic.

the bat symbol is distinctive and long lasting :) I will add this link to your information, many thanks.