But it was through their collecting that I first heard of the Barr Smith family. From the 1880s on, Robert and Joanna Barr Smith were major clients of William Morris' London shop, furnishing seven of their vast South Australian houses almost exclusively from the firm. 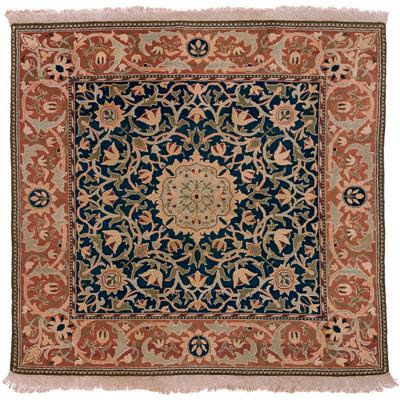 Robert’s son, Tom Elder Barr-Smith (1863–1941), his wife and their five children used the stately home Wairoa in the Adelaide hills as their summer house for 30 years. During this period the Tom Barr-Smiths made a number of alterations to the house. But most importantly for us, they refurbished the interior of the house with William Morris wallpapers, curtains and rugs.

Today the Art Gallery of South Australia says it holds the most comprehensive collection of Morris & Co furnishings outside Britain; the first and finest of its purchases was a Morris & Co tapestry, The Adoration of the Magi, which arrived in 1917. Later the Gallery has brought together furnishings from the Barr Smiths’ richest rooms, including the large Drawing Room at Torrens Park. Embroideries have been conserved for display, including a large 1890s hanging, designed by May Morris, depicting fruiting trees, birds and foliage in silks. And many new items have been acquired directly from London, including the famous Trellis wallpaper, designed in 1864.

Later in his life, William Morris could publish books with the establishment of his Kelmscott Press in 1890s. Some of these beautiful books, catalogues and pamphlets have now been collected together by the State Library of South Australia. 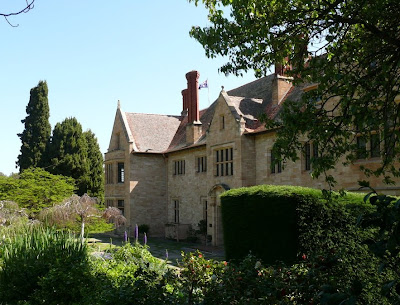 So I was looking forward to seeing Carrick Hill, the estate that grew out of the 1935 marriage of members of two of Adelaide's most prominent families: Ursula Barr Smith (1908-70), daughter of our very wealth pastoralists and Edward Bill Hayward (1903-83), son of the wealthy merchant family that owned John Martin's, once Adelaide's greatest department store.

Bill & Ursula honeymooned for a year in Britain. It was then they came across Beaudesert, a grand old Tudor manor house in Staffordshire , owned by the Marquis of Anglesea. As quickly as they could, the honeymooners acquired much of its Tudor and later panelling, doors, staircases and windows. The house was already being destroyed, and the fittings and fixtures would have ended up in the skip, had the young couple not rescued them and sent them in shipping containers to Australia.

When they returned to Australia, Ursula's father gave the couple the land on which Carrick Hill now stands as a wedding present. This was a very substantial gift - 40 hectares of prime real estate with fantastic views of the city. A family friend in Adelaide, architect James Irwin, designed a house for them around Beaudesert’s fittings.

The ground floor is dominated by the large panelled hall. Australia's finest collection of antique oak furniture is to be found in the dining room downstairs, where the Haywards lived a British lifestyle. The Jacobean-style staircase is large, very grand and definitely the centre-piece of Carrick Hill. It leads from the grand entry hall to a very decent gallery above, a gallery covered with paintings. 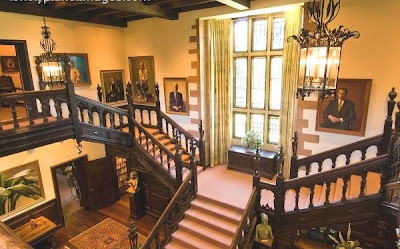 The art in the gallery includes amazing paintings and sculpture. Many of the paintings preserve and celebrate Australia’s British heritage, as analysed in The British Collection at Carrick Hill, ranging from John Dicksee 1876 to Stanley Spencer 1945.  Since most Australians believed that it was possible to be both British & Australian, the Hayward collection should not be dismissed out of hand as Anglo-centric. In fact these paintings might specifically enable the modern viewer to critically examine the consequences of colonialism, of empire and of nation building.

Nonetheless it is inevitable that the couple would largely support the contemporary Australian artists they were closest to, especially Russell Drysdale, William Dobell, Donald Friend, Nora Heysen, Jeffrey Smart and Adrian Feint. In time William Dobell introduced them to Patrick White, and their creative circle grew.

Upstairs the bedrooms have an unusual mixture of Georgian furniture and Victorian oak pieces, mostly inherited from Ursula's family, and used to fit in as needed. But the bedrooms are also where daddy’s Arts and Crafts objects are most in evidence; in fact the bedrooms signal William Morris’ only appearance in this house. I wonder why did Bill and Ursula not want to fill their house with her parents’ Arts and Crafts treasures.

Carrick Hill was being built from 1937 on, and within two years the couple had moved in. 1939 was also the year in which Ursula started designing the rather splendid garden, trees, water features and external statues. It is worth repeating that these two wealthy and cultured Australians established a stylish British way of life; Ursula and Bill’s parties, music and wine must have seemed rather wonderful. 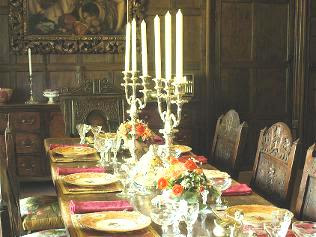 Carrick Hill was just one of the Haywards' four homes. The one I would most loved to have seen was the townhouse in Mayfair, situated near many of their favourite London art and antique dealers.

The honours rolled in. In 1953 Ursula was appointed as trustree of the Art Gallery of South Australia. In 1961 Edward was knighted for his service to the community and to business. A decade later Sir Edward and Lady Ursula Hayward agreed to bequeath Carrick Hill to the people of the state.

What a lovely house and great collecting instincts. It is the conundrum of Morris' life that he wanted to make objects for the workers but they were so expensive they could only be bought by the rich. Enjoyed that Helen.

Hoffmann didn't disagree with Morris' dictum. He simply had to work around it.

How modern were their modernist paintings?

the Carrick Hill home page says that the Haywards purchased:

Thank you. I did a half day tour through Carrick House with a guide from the AAANZ. It was terrific fun.

Excuse my ignorance of Australian geography but this looks very good:

You hit pay dirt with this block buster! I have never been to the Musée National Picasso myself, so this is a great chance to see a share of what is arguably the best collection of Picasso's work anywhere.

Even though Picasso is not my favourite artist, we will definitely be flying to Sydney on a Friday afternoon and staying till Sunday evening. My husband went to school and uni in Sydney, so he likes going back once or twice every year.

I'm so glad Helen, you get some great shows in Australia.

J Bar
thank you. We have some great collections here in Australia, usually Melbourne, Sydney or Canberra. So it is a delight to find this treasure in Adelaide.

I have added a reference to "The British Collection at Carrick Hill", 1991, a very detailed analyis of the Hayward's British paintings.

Hi Helen, I would like to get in touch to facilitate a visit to Labassa at Caulfield North. Could you email me Andrew.Dixon@monash.edu
Many thanks

Promoting house museums is a great idea. Of the ones you mentioned, I had the best time at Carrick Hill in Adelaide and the Duldig Studio in Malvern East. Another place that I really loved was Edzell Mansion in Toorak but you may not be able to visit it, these days.

Good to hear from you
Hels
http://melbourneblogger.blogspot.com.au/2010/06/edzell-mansion-incomparable-dame-nellie.html

The couple spent their honeymoon touring the great gardens of England. In Adelaide, their Teardrop garden, with Jacob Epstein's sculpture Standing Mother and Child (1911), is at the centre of a flagstone-lined turning circle. The Tier garden, supported by walls constructed with stone mined on the property, and spliced with wide stone steps, rises above.

The plants in the garden were imported and bought locally. We know from her nursery bills and notes that Ursula subscribed to a lot of English nurseries.

thank you. I was on a group tour at Carrick Hill and spent all our time looking at the the family's architecture and collecting. Next time we should allocate more time to the gardens.

Kelmscott Manor was the Cotswold retreat of William Morris and his family, friends and colleagues. When Morris first saw the Manor in 1871, he was delighted; he signed a joint lease for the property with his friend and colleague Dante Gabriel Rossetti, the Pre-Raphaelite artist.

From April to October, visitors are welcome every Wednesday and Saturday, 11.00am to 5.00pm. In addition to visiting the Manor house and gardens, visitors can explore the licensed Tea Room and lovely gift shop.