John Constable and his Suffolk landmarks

In the immediate vicinity of Flatford Mill in Suffolk there were a few sites that John Constable (1776-1837) knew very well and painted often. The mill itself was owned by the artist’s father Golding Constable and was their first home, although the family soon moved to a bigger and better home in nearby East Bergholt. These were the places that were central to Constable’s concept of home. As he wrote in a letter to his friend Archdeacon Fisher in 1829 "painting is with me but another word for feeling, and I associate my careless boyhood with all that lies on the banks of the Stour. These scenes made me a painter and I am grateful.” 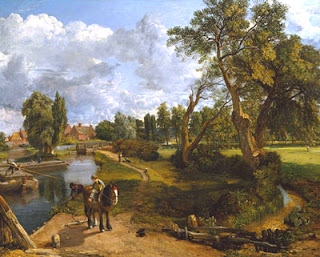 Flatford Mill, painted by Constable in 1816-7, Tate
Flatford Mill/Scene on a Navigable River 1816-7 was a rich evocation of his Suffolk boyhood and his father's professional interests, especially the navigation system of the river Stour. John was already 40 when he finished this substantial work (102 x 127cm). It displayed a pair of barges travelling upstream that were about to be disconnected from the towing-horse, so that they could be pushed by pole under Flatford footbridge. The viewer can easily detect Flatford Mill on the river, a facility that lay at the heart of the corn milling business run by Constable's dad. Today Flatford Mill is Grade I listed, as is the 17th century miller's cottage next door. 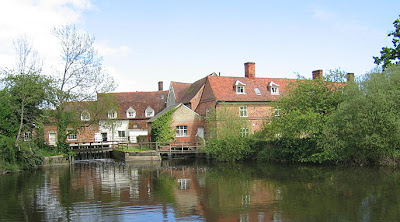 Flatford Mill today
Dedham Vale was at the centre of a successful wheat-growing region during John Constable’s time, so the more land dedicated to cultivation, the richer the growers and millers would be. As a result, Dedham Vale was a busy working area, lovely enough but not drop dead gorgeous.

John Constable’s painting of The Hay Wain 1821 is very well known, a work that was probably painted from Flatford Mill. The viewer can readily identify a hay wain on the River Stour. The house on the left side of the canvas belonged to the tenant farmer neighbour, Willy Lott, whose family had lived there for several generations. And in the centre we can see a harvest wagon crossing the shallow stream near Flatford Mill. 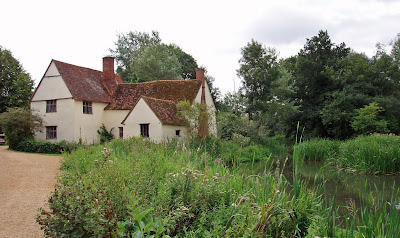 Willy Lott's Cottage, today
When The Hay Wain was first displayed at the Royal Academy in 1821, it wasn’t warmly received. It was actually better received in France where was exhibited with other works by Constable at the 1824 Paris Salon. In that exhibition, The Hay Wain was awarded a gold medal by King Charles X and praised by the most modern of the French painters, including Eugène Delacroix.

Sold at the Paris exhibition with three other Constables, the painting made its way back to England via a dealer and was sold on several times. It wasn’t until 1886 that The Hay Wain was given to the National Gallery in London, where it remains today. I have been on a tour of enchanting Constable Country and in my humble opinion, the painting is an interesting but not his best piece of art.

Nonetheless it was very important, according to Kevin Andrew. Although the lifestyle Constable depicted had already become out of date by 1821, our impression of this entire part of the English countryside is still informed by Constable. He has created it, and at the same time he was created by it. (Thank you Kevin. I stumbled around trying to express this thought and you put it very elegantly).

Did it matter that Constable tweaked the scenes he painted, making Flatford Mill bigger and the river Stour wider? Not at all, according to Art Finder; Constable was simply ensuring that his landscapes withstood comparison with those by old masters. 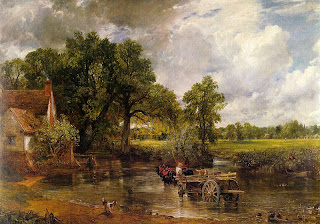 The Hay Wain 1821, Nat Gall London, Willy Lott's Cottage appearing on the left
But I must be the only art person in the entire Western World not to have realised that the lovely white house in East Bergholt is the very same 16th-century cottage from Constable’s painting. Renamed Willy Lott's Cottage to fit in with Constable’s label, this is real life copying art.

Willy Lott's cottage has survived largely intact. It was restored but not altered in the 1920s after a revival of interest in John Constable's paintings. It is now Grade I listed and, appropriately, owned by The National Trust. As in the painting, the cottage is located near Flatford Mill which, along with neighbouring Valley Farm and Bridge Cottage, are now used as residential locations for arts-based courses. An art-led recovery!


***
By this stage I was right in the swing of real life properties and Constable landscapes. So imagine my surprise in finding a real estate ad for Glebe Farm in 2010. The farm house is in Langham near Dedham, on the Suffolk-Essex border.

When his good friend and patron, Bishop Fisher of Salisbury died in 1825, Constable painted an image of St Mary the Virgin Church at Langham, in the Bishop’s honour. This was where Fisher had been rector when Constable met him in 1798. To the right of the painting, the viewer can see the neighbouring farmhouse called The Glebe Farm. The image of Glebe Farm must have been a favourite with Constable since he painted four versions of it between 1826-30. 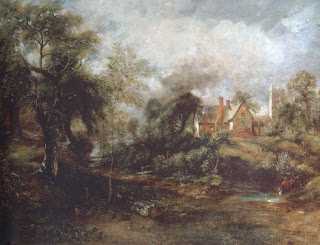 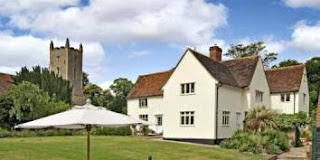 Langham farmhouse today with the same church tower that Constable depicted in 1830.
﻿
Posted by Hels at 13.9.11

Used to live nearby and went frequently. The new hasn't changed much as you say. One of the local churches has a Constable. Not my favourite painter but he certainly brought lots of tourists to dedham vale.

I like the Suffolk paintings because Constable seemed to know what he was talking about re barges, coal, towing horses amd boats. Have a look at Boat Building Near Flatford Mill from the same sort of era 1815.

Hermes
he certainly did. I went on an organised tour with the Summer Academy one year. The area was hopping and jumping with Constable fans and with young arty types.

the V & A had an exhibition one year, highlighting (amongst other things) the fact that Constable painted en plein air and with great truthfulness. Boat Building Near Flatford Mill was a wonderful example.

Thanks for this post! I love anything about Constable, and when in England I'll often stop at a rural vista and think: "This looks just like a painting by Constable!"

That is hilarious - real life copying art or at least being analysed through the art perspective :)

I do it all the time. And I get really annoyed if my pre-conceptions have been ruined by modern reality.

you've done really excellent job! thanks a lot for sharing!!

It was a pleasure. I hope you are a Constable fan.

Thanks for your well wishes, Hels. I ran into a barrier fence at night and fell over the top. Fractured my leg and my arm, then battled an infection. Recovering well now. :)

you are going to have to stop taking those amazing photos from obscure places at awkward times! Blogging is hurting you!

When I was taking photos in Suffolk, I travelled in a mini bus with an organised tour in the middle of the day. It was safe and gorgeous :)

Great to see the original scenes of the Constable paintings that a never tiring to look at.

*nod*. One of the things I loved doing as a student myself was searching out the life and times of my favourite artists. I think you cannot really understand Constable unless you have crawled all over his favourite Suffolk haunts.

I love the fact that Constable (born 1776) and Turner (born 1775) were practically twins yet they developed totally different styles of painting.

Both of them are equally important in modern history of art writing, I think. But poor old Constable struggled - he was never financially comfortable and he wasn't accepted by the official academy until late in his life. The life of a struggling artist is not a life I would enjoy.

Not as often as I want. Whenever I have looking at your blog some kind of information. Lots and very successful. I love above all this world that describe the images, these landscapes almost impossible between two fratricidal wars. Landscape where there is none. Where are the people?. And this environment without any noise. Pardon me so much poetry. I wanted to invite you to my blog that I started recently. I am not talking art or architecture or the memories of a life, but I intend to show maps where history happened. History maps, maps of science, humor, anything that can reflect on a map. Thank you for allowing crosses your pages and make this little comment.

*nod* the landscape in general and Constable's version of the landscape in particular tends to bring out the poetry in people. But what were the two fratricidal wars of which you speak? Not the civil wars of the 17th century?