Rooms organised during the Regency (loosely defined as 1795-1837) as libraries often had floor-to-ceiling bookshelves. The upper shelves were difficult to reach, so movable library stairs were invaluable.

Clive Taylor has shown that the tables, chairs and stools containing library steps were patented in Great Britain by Robert Campbell in 1774 but this innovative chair-based design did not become immediately popular. Once the Regency was established, a neo-classical interpretation of Campbell’s Metamorphic Library Chair concept started to become popular in London. Any early attributions rely heavily on two contemporary sketches. The first image, by Rudolph Ackermann in 1811, showed a Morgan and Sanders chair, while the second was of a Gillows chair in 1834. 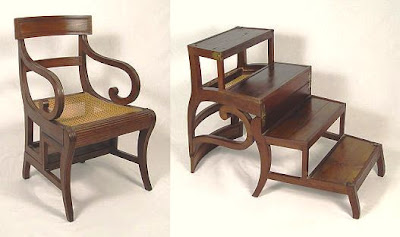 And just as they were fascinated with mechanical curiosities and dual-purpose furniture during the Regency, so we are today. The design was clever, compact, saved space in the library and looked good.

Metamorphic/mechanical furniture had been used elsewhere. There was plenty of discussion in the antiques literature about clever cabinet makers who designed and made lovely objects for the courts of Louis XV and Louis XVI in France.

Furthermore it was common for French, German and British military officers to order comfortable furniture while travelling behind their armies to battle fields. Sean Clarke has shown that at least for JW Allen Co and John Shepherd Co, campaign furniture it was a natural addition to their trunk making role. If this was true, the majority of makers of campaign furniture were to be found under trunk makers as opposed to cabinet makers in the trade directories. Ordinary cabinet makers, asked by army officers to adapt their standard work, would also make travel furniture as one-off bespoke pieces.

Of course the designs of these officers’ objects had to be light, easily packed and small enough to fit into military camps. As well as elegant! As you can see from the British Lieut General's example, he wanted portable trunks that could be reassembled into a beautiful mahogany and brass chest of drawers. 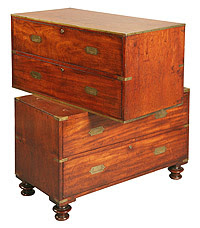 Antiques Now showed a similar Regency metamorphic library chair made in c1811 and attributed to Morgan and Sanders. As with the other neoclassical style Trafalgar chairs, this one could be converted into a small set of library steps. But here was something different. Apparently Morgan and Sanders offered upgrades to their standard design; this rare example included over-scrolled uprights and a caned back.

Antiques Atlas agreed that dual-purpose chairs and tables became fashionable as wealthy merchants and landowners revelled in the novelty and ingenuity of space-saving mechanical furniture. And they agreed that most metamorphic chairs of this type concealed library steps. What was exciting about the Antiques Atlas example was that the chair opened to reveal a small library table. It was presumably designed and built in France during the reign of Louis XVI or during the early years of the Napoleonic Empire (1790-1805). The chair was made of walnut with a carved, demi-lune or fan-shaped backrest. 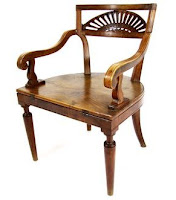 The chair is brilliant and so attractive. All that metamorphic furniture history and what do we end up with, a bed settee.

Hello Helen:
Such furniture, as you show here, is always most fascinating and, of course, highly desirable. Once we had an armchair which converted into a table, which was rather fun, but it dated, in all probability, from around the 1930s and certainly had nothing of the elegance of the Regency period.

ha ha.... it all had to start somewhere. There has been long history of metamorphic furniture, developing and changing over the generations. But I don't suppose it started before the late 18th century.

I assume your armchair which converted into a table was essential at a time when rooms were smaller and family income was more limited. Metamorphic furniture was very sensible during the Depression and war.

At lunchtime today, we were talking about a large globe of the world that sat on the ground on castors. Then it opened on the equator to reveal a full bar, complete with bottles, glasses and cocktail making equipment.

that reminds me of an amazing English globe that turned into a complete writing desk, made in 1810. See Rau Antiques at http://www.luxist.com/tag/globe/

I would love a library chair (and a library rather than book cases). When you mentiomed metamorphic I thought not of furniture but those amazing ladders that can be used about ten ways. Men eh!

metamorphic furniture was a clever response to a space problem...the person who first thought of the concept must have been a genius. But the actual designs had to be perfect - one mm out here and there, and the timber wouldn't move into the alternative working arrangement.

Those modern ladders, and everything else we use today, are just extensions of 1774 thinking and 1811 design.

you are spot on! Every generation thinks it is the smartest, most modern, most scientific, most inventive and most technologically advanced generation in the history of humanity. Parents are old fashioned and grandparents are almost pre-historic.

And yet.. and yet... clever metamorphic furniture was being well designed in the late 18th century.

I suppose the moral of the story is that everything has a history, often a long one. Even mobile homes. Well fitted wagons, built to live and travel in, were developed in France no later than 1810 and probably earlier.

This may be of interest also.

the idea of clever furniture is possibly as relevant today (with our smaller families and smaller houses) as it was in the 18th century.

I love the objects you selected. I already knew about the Jupe Table: http://melbourneblogger.blogspot.com.au/2012/08/jupe-table-clever-adaptable-expensive.html And the two door-based concepts may not change the world. But Story is a VERY interesting piece, a combination of 3 vital elements: sofa, workstation and bed.

I enjoyed reading your article :) PLease continue publishing helpful topics like this. Regards, from Kingsgreatbuys, a company whose into selling klaussner sectional.

we moderns think a] we invented everything and b] we are the first generation to understand everything. But that is clearly not true. Those regency designers were very clever, inventive chaps!