The Folies Bergère began in 1869, opening as one of the first major music halls in Paris. Once a hall for operettas, ballets and pantomime, the Folies Bergère became the premier nightspot in Paris and had elaborate and colourful revues that featured dozens of sets and costumes. Montmartre was becoming a hopping and jumping suburb, except for the nightmare of the Franco-Prussian War period (1870-1). 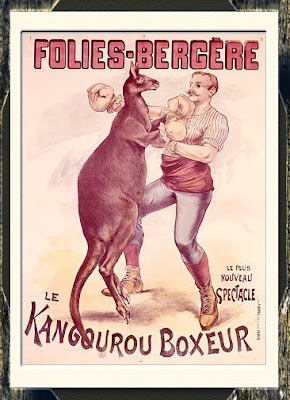 Then in the 1870s, after the war ended, the Folies Bergère staged vaudevillian acts, displaying varied and exotic talents including trained elephants, snake charmers  and strange clowns. There were "unusual" performances put on by Miss Loie Fuller and Little Tich, very talented English music hall stars and comic dancers. The more exotic, the better! In fact the Folies Bergere shows actively played up the exoticness of persons and objects from other cultures, stretching the boundaries of good taste wherever necessary. 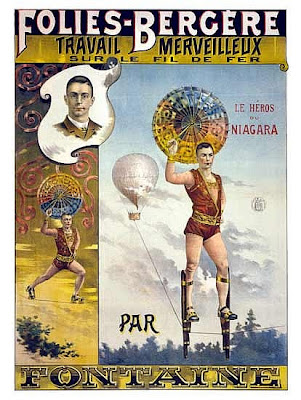 
But most interesting of all, at least to an Australian, was the boxing kangaroo. See the poster Folies-Bergere/Le Plus Nouveau Spectacle /Le Kangourou Boxeur which appeared on Paris walls. It featured a kangaroo boxing with a man in blue tights, red boots, a red waist band and a striped shirt.  Stupid.com told an amazing, if bizarre story. A man from Australia arrived in Paris with an adult kangaroo named Lester. When the Australian claimed Lester could out-box anyone in the ring, people packed into the Folies Bergere; they were keen to watch something so exotic that no-one in Paris had ever seen before. It may not have been High Culture, but it certainly was popular.

When did all this reach its peak? In 1886, the Folies Bergère went under new management which was responsible for staging the biggest revue-style music hall shows.  Fortunately we can still read their programme: the Isola brothers (illusionists), Nala Damajenti (snake charmer), a troupe of real Zulus, our favourite boxing kangaroo, wrestlers, Ira Paine (American marksman), Sampson (a chain breaker!), Captain Costentenus (tattooed with 325 animals), the Scheffers (acrobats), Baggenssen (eccentric clown) and Little Tich (the famous English music hall star). Most of the stars of 'Car Conc' sang at the Folies, namely Paulus, Polin, Yves Guilbert, Polaire and Gaby Deslys.

That same year, 1886, new management introduced Place au Jeunes, a revue featuring chorus girls. It was a great success largely because the chorus girls wore little more than feathers and a smile. In Ambassadeurs Cabaret in Paris, one chorus girl didn't even have feathers. Just a big picture hat, as you can see in Belle Epoque Vintage Posters! 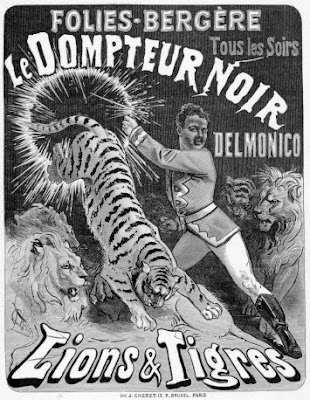 The audience drank in the theatre’s indoor garden and the bar area, as we can see from the well known paintings by Toulouse-Lautrec, Degas and Manet. But even more importantly, the special nature of the performances was captured on posters that were pasted on the city walls. This exuberant image of the American dancer Loie Fuller captured the spirit of sensuality and excitement in the cabaret culture of fin-de-siècle Paris.  Print-maker and poster designer Jules Chéret made Folies Bergere, and the delectable Loie Fuller, very inviting. 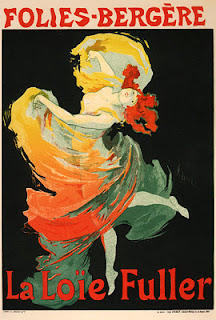 Hello Helen:
One can only imagine that at the time it must all have seemed huge fun and something totally different. Whatever, it attracted large audiences although today we should probably think of much of it as at best being politically incorrect and, at worst, particularly offensive in its depiction of other societies and cultures.

We loved your description of the dancers with little more than their feathers and smiles. Nothing much really changes there!

I suppose that the moneyed classes could always get to see performances in drama, concerts, opera or anything else they liked. The joy of Folies Bergère was that for the reasonable price of an entry ticket, ordinary working families could have huge fun for the evening. And see things they would never have seen before :)

In poor taste? I would imagine so. But such fun.

I think the good citizens of Paris understood how marvellous the Belle Epoque was going to be. After the Franco-Prussian war ended and after Baron Haussmann's modernisation of the city, life was only going to get better and better.

Little Tich had an amazing career in music hall. He wowed them in Britain and the USA, but did he speak French decently.

Gordon Irving said that Little Tich travelled to Paris to appear at the Alhambra, the Olympia and the Folies Bergere.

The good folk of Kent flocked to London to laugh at him. For 17 years he was the toast of the old Tivoli Theatre in the Strand. Then there was Drury Lane, his second home. The pantomime audiences loved Little Tich, especially in the "Humpty Dumpty" and "Hop o’ My Thumb". To see Harry walk on stage made people laugh instantly. He won audiences over right away with his lack of inches, his burlesque evening dress, his top hat, his cigar and his cherubic silly man smile.

Clearly language was not an issue!
See http://www.bigginhill.co.uk/littletich.htm

the Australian connection was an unexpected thrill :)

Just love the posters. The Victorian loved 'freaks' and such shows. They were very popular at the time.

using well designed, well coloured posters was a brilliant bit of advertising inventiveness. I like to think each poster had about 30 seconds to attract the attention of a citizen walking past. So it had to boldly present an act that would entice new comers to the music hall.

That's fascinating about Little Titch, I was only reading about General Tom Thumb and his wedding the other day.

What a stunning post! That poor kangaroo though. I bet he didn't get first class passage from Australia but sat in a crate in the dark!

I love the idea of this exotic and exciting place though. It must have been really jolly.

don't you love it when you can make a link, even months or years after initially reading the material? I was delighted to go back and make a blogging link between, for example, Little Tich and Rosherville Gardens.

The spelling is important. The name Tich was apparently in ironic memory of the Tichborne Claimant who was a huge, obese man. Little Tich was a skinny, child-sized man.

how clever of the organisers to find exotic acts from distant places doing unbelievable stunts. Assuming they were real Zulus, and real snake charmers (or even if they weren't), the audience was mesmerised.

Of course the ladies in the chorus wearing glitter instead of undies were also mesmerising :)

Ooh la la, what a totally different world from Jerusalem that Paris was!

Helen, prompted by your comment, I added a little more info and some links to better photos of the church frescoes.
Yes, how right you are, awesome that they still exist, even if de-faced.

Dina
thank you for that. Every few years I lecture about crusader architecture and decorative arts (eg reliquaries). But I hadn't thought about the Crusader Resurrection Church nor had I ever seen the murals. Well done, the French government!

Thanks for sharing this article