Cuzco (pop 360,000) is located 1089 ks south east of Lima. The gateway to Machu Picchu and the Sacred Valley,  Cuzco was an administrative, military and holy city, capital of the Inca Empire (1200s-1532).  Over the centuries, Cuzco has come to display several different cultures - pre-Inca, Inca, Colonial and Republican.

The first Spaniards arrived in the city in Nov 1533. Francisco Pizarro named it the "Very noble and great city of Cuzco”. The Spanish destroyed many Inca buildings, temples and palaces, and used the remaining walls as bases for the construction of a new city. It became a beautiful colonial city, filled with European monasteries and cathedrals. As a result, you can expect to see many splendid but diverse styles of architecture, layers of cultures in one town.

Many travellers now spend several days in Cuzco itself, seeing the most important sites eg the Cathedral of Santo Domingo 1654 in the main square. The Cathedral, as well as its official status as a place of worship, has become a major holding site of Cuzco's colonial art and artefacts. UNESCO World Heritage status was granted in 1983. 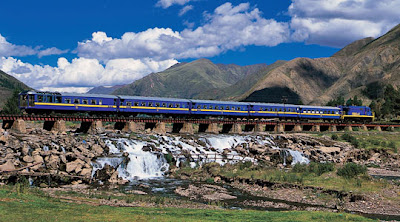 The Hiram Bingham train, climbing the Andes
*
Hiram Bingham was the American explorer who revealed the remains of the Inca citadel, Machu Picchu, in July 1911. He had traced Simon Bolivar’s footsteps, including the historic trade routes through Venezuela, Columbia, Peru, Bolivia and Argentina, funded largely by his wife, an heiress to the Tiffany jewellery fortune.

He and his party hit pay-dirt when they heard in Cuzco that there were extensive ruins high in the mountains nearby. He excitedly wrote that “suddenly I found myself confronted with the walls of ruined houses, built of the finest quality of Inca stonework. The ruins were overgrown but the white granite walls were carefully cut and exquisitely fitted together. The scene fairly took my breath away”.

How does the modern traveller get to Machu Picchu? There is no direct road between Cuzco & Machu Picchu and although there are many ordinary trains, there is only one luxury train: The Hiram Bingham!

The Hiram Bingham departs from Poroy Station (20 minutes outside Cuzco) at 9am. Travellers are greeted with a fun display of traditional dancers and musicians, and Orient Express employees serve champagne. Inside food and drinks are served in the bar car.

The blue and gold carriages are filled with elegant decoration, a la 1920s Pullman trains. Note the polished wood, gleaming cutlery and glittering glass. The train consists of two dining cars, an observation bar car and a kitchen car, and can carry up to 84 passengers. 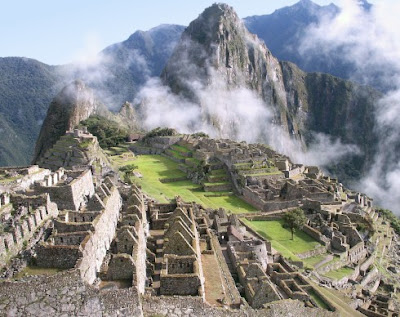 Machu Picchu ruins in the mist
The scenery is always different, always fascinating. From the agricultural plains of the Sacred Valley, to the crashing waters of the Urubamba river, and the soaring mountains. The Hiram Bingham travels slowly enough to see everything. The train arrives into the tiny town of Aguas Calientes where private minibuses await passengers to escort them on the trip up to the citadel. A guide tells speaks about Inca history.

Machu Picchu, the Lost City of the Incas, is one of the most famous examples of Inca architecture and is located 112km from Cuzco, 2,350 ms above sea level. The ruins, probably built in the mid-C15th by the Inca Emperor, are surrounded by lush jungle. The ruins are situated on the eastern slope of Machu Picchu in two separate areas - agricultural and urban. The latter includes the civil sector (dwellings, canals and sophisticated irrigation systems) and the sacred sector (temples, mausoleums, squares and royal houses). The Machu Picchu citadel combines stunning natural scenery with a historic treasure trove, and is now recognised as one of the New 7 Wonders of the World.

During the Inca Empire, Ollantaytambo was the royal estate of the Emperor who conquered the region. At the time of the Spanish conquest of Peru, it served as a strong-hold for Inca resistance. The region was only abandoned by the Incas some time after the Emperor’s death in 1472. Now it is an important tourist attraction because of its stunning stonework Inca buildings. And as one of the most common starting points for the 3-day, 4-night hike called the Inca Trail. Trains run between Ollantaytambo in The Sacred Valley of the Incas and Machu Picchu.

The Incas built several storehouses out of fieldstones on the hills surrounding Ollantaytambo, complete with ventilation systems. Their location at high altitudes, where there is more wind and lower temperatures, defended their contents against decay. The guide said they were used to store the production of the agricultural terraces built around the site. Grain would be poured in the windows on the uphill side of each building, then emptied out through the downhill side window.

Moray is a small village, c50 km NW from Cuzco, down the road leading to the town of Urubamba. Moray is quiet and a nice way to reach Moray is by Peruvian Paso-style horseback riding. Riders travel across the hilltops above the stunning Sacred Valley backed by the distant snow-capped Andes. Here the Mares salt mines are a great spectacle, worked since pre-Inca times and still in use today. 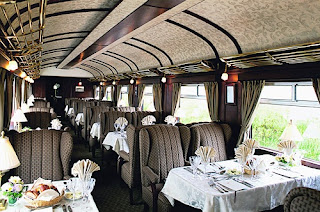 Hiram Bingham train, dining car
In the evening, The Hiram Bingham leaves Machu Picchu at 6PM. Guests are welcomed back on board with pre-dinner cocktails and music served in the Bar Car. Later a 4-course, à la carte dinner is served in the dining cars. The train returns to Poroy station near Cuzco at 9.30 PM.

My husband did this trip years ago but there have been two changes since. Firstly the hordes of tourists these days cause so much damage that apparently a limit will have to be put on their numbers. Secondly Yale University has signed an agreement that will return to Peru of some 5,000 artefacts taken from Machu Picchu by Hiram Bingham and his party. The objects have been in the possession of Yale University’s Peabody Museum for 100 years.

Would love to do that trip. Found the train web site:

you have such a wide-ranging mind - ove it.

Hello Helen:
How fascinating all of this is and to have seen it, as your husband has done, and before the great influx of tourists and trippers, would have been particularly special.

Our own knowledge of the whole of the Inca Empire derives mainly from 'The Royal Hunt of the Sun', a play we know particularly well and one which we consider to be exceptional. This post prompts further exploration of the history of this lost land.

mrs tff and I made the rail trip some years ago as part of a convention.

Some memories: Machu Picchu gave me goosebumps, and I still think that walking those terraces is the most awe inspiring experience I have had.

That is despite the fact that there was minor unrest at the time we were there. The train we were in was attacked - a local threw a rock through the picture window of the train and said rock (not a stone, but a rock the size of a boulder) hit me in the chest. No major damage to me apart from incredibly coloured bruises that lasted for a while.

But the train driver backed the train up the line to where the incident occurred. They found the person, who for some reason had not left the area, and dealt with him rather severely.

Thanks for the references. I had been very interested in the concept of long distance luxury train trips, inspired largely by the Orient Express which started in 1883. Those late Victorians-Edwardians knew how to travel in style and have a great time holidaying in exotic places.

I got to the Hiram Bingham train almost by accident. Joe went to a conference in South America and loved the experience.

sometimes blogging posts, and the comments that follow, lead us back into old much-loved but half-forgotten topics. And sometimes they lead into new areas that we may not have thought about before.
eg I have written about Coco Chanel before, but now a new book review has re-jogged my interest in the subject.

I hope you do explore the history further... there is a great deal yet to be documented and analysed.

sorry for your traumatic experience. Hopefully it didn't detract (once the bruising faded) of most awe-inspiring experience in your life to date.

I have been on a number of long distance luxury train trips, all a huge success. I suppose the greatest for natural scenery was the Rocky Mountaineer in Canada. For built history and whiskey, I cannot go past the Royal Scotsman :)

Yes you can do the Cuzco-Machu Picchu run in one day, but it will be rushed. A much more relaxing idea is staying at the hotel in Machu Picchu overnight. Get up early and watch the sunrise from the hotel garden. Then have a second full day of sight seeing.

What a wonderful trip. As soon as I read the word Pullman, straight away I want to take the trip. I expect Cuzco is a place best seen with a good guide

agreed. The whole purpose of a long distance, luxurious train trip is to see everything in a leisurely, comprehensive manner. Of course this is hardly a long distance trip (112km one way), but why not maximise the pleasure and the learning.

There is the only hotel next to to the ancient Inca citadel but it does offer a nice Hiram Bingham Package deal :)

I am with you. There is something truly magical about beautifully fitted out Pullman cars. The beautiful woodwork, etched glass, brass etc make us feel as if we have returned to the early 20th century.

I can understand 17th century Spanish architecture without a guide but I would struggle with the meaning of Inca treasures.
The Temple of the Sun at Koricancha, for example, was the most sacred building in Inca Cuzco. 4,000 priests and staff lived there.