Bligh, Mutiny on the Bounty, breadfruit

TWO gold medals, awarded to William Bligh (1754 –1817) of Mutiny on the Bounty fame, are to be offered for sale at auction at Melbourne's Dallas Brooks Centre by his descendants (26th-28th July 2011).

This Cornish lad had a rapid rise up navy ranks. Captain James Cook, of international fame, made Bligh his sailing master on the Resolution.  Bligh accompanied the great man in July 1776 on Cook's final voyage to the Pacific.

In the 1780s, Bligh was a captain in the merchant service. Then in 1787, he became commander of HMS Bounty. The botanist Sir Joseph Banks wanted to transplant a crop of breadfruit to the West Indies as food for slaves. The Bounty arrived in Tahiti in 1788, having been delayed 11 months by severe weather, only to find that the breadfruit was out of season. Bligh decided to give the crew six months' shore leave in the tropical paradise; there they waited for the new seeded breadfruit to grow into saplings mature enough for transportation. 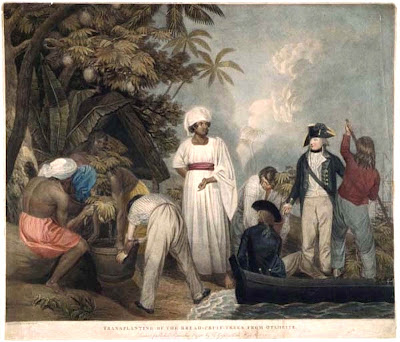 Many of the crew settled into cosy domestic relationships with local women, making life in Tahiti very pleasant. So when it was time to sail for the West Indies in 1789, there were already rumblings in the ranks. Under the leadership of Fletcher Christian, the crew mutinied at sea and placed Bligh and 18 loyal followers in an open 7-metre boat with food and water, but with no charts or navigation aids.

Why did the crew do it? Probably not because Bligh was a vicious and cruel ship captain, at least by standards of the time. He might have been an arrogant sod, but he was an educated man, a scientist, and a captain interested in the health and welfare of his crew.

Bligh, in what is regarded as one of the greatest seagoing feats in history, navigated from the memory of his charts, guiding the overloaded and unstable vessel on a very long voyage and arriving in Timor 47 days later.

A second successful attempt was made to transport the breadfruit, accomplished in 1793. 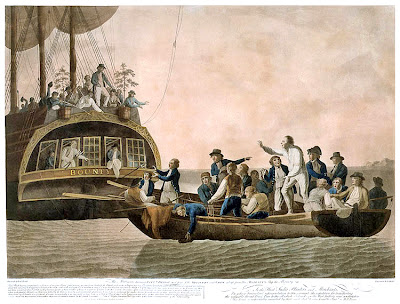 The mutineers turning Lt Bligh and some of the officers and crew adrift from His Majesty's Ship Bounty,
by Robert Dodd, April 1789

The first medal up for auction today was awarded in 1794, given by the Royal Society for Bligh's successful work relating to breadfruit. Bligh’s medal carries the inscription on the rim: BREAD FRUIT TREE CONVEYED TO THE WEST INDIES. The estimate for the medal is $50,000.

The second slightly smaller medal, estimated at $200,000, is the Naval Gold Medal 1795, awarded to ship captains. Bligh won it for his role at the Battle of Camperdown 1797. This was an important naval action between the Royal Navy fleet and the Dutch navy, in which the British captured 11 Dutch ships without loss of any of their own.

After his exoneration by the Court Martial inquiry into the loss of the Bounty, Bligh remained in the Royal Navy. He even served under Admiral Nelson in one important battle or another in 1801.

Bligh was offered the position of Governor of New South Wales by Sir Joseph Banks and appointed in March 1805 at a hefty salary. William Bligh was the fourth Governor of NSW between 1806-1810, still very professional and exacting, and still irritating other people. He was aware that some of the officers were acting in their own interests, at the expense of farmers. When he legitimately questioned the unjust trade and land grants being exercised by New South Wales Corps officers, Bligh was arrested by the army in 1808. This was Australia’s only military coup and for the next two years, until the arrival of a new Governor, officers of the Corps took over the role of Governor! Only when the new Governor Lachlan Macquarie arrived with his own regiment in 1810 was justice regained.

Another trial back in Britain and another promotion for Bligh! He was promoted to rear admiral of the Blue and then to vice-admiral in June 1814. What a career!

Portrait of William Bligh, 1804. National Library of Australia (left) and his medal (right) 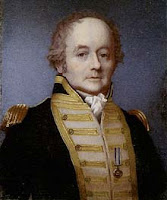 Hello Helen:
What a fascinating account of Bligh's life which goes well beyond the few known details of the Mutiny on the Bounty - most likely only well known on account of the film.

In our ignorance, we had no idea that he had ended up occupying such prominent positions in Australia. It will be interesting to know what the medals fetch.

I was reading about Bligh's remarkable journey only recently. He was obviously a very accomplished seaman with amazing resilience.

The good thing about Hollywood blockbusters is that they introduce topics to people who would have otherwise known nothing of the topic. The bad thing is that people think Brad Pitt (or some other hunky man with big peccs) saved The Bounty and Timor for the American Navy.

Re Bligh's four years in Australia, I will add another paragraph to my post.

Bligh was a very skilful sailor and officer! Not only were his navigational skills truly exceptional, but he also worried about the crew's nutrition, diseases and the gathering of scientific information.

His career rocketed along very satisfactorily, reflecting a] his skills and b] his connections.

Are there any memorials or museums that commemorate the events on and off The Bounty? The two medals up for auction are important, but they won't be seen by the public.

the remains from The Bounty weren't located until after WW2 and since then, bits and pieces have been displayed at the Fiji Museum in Suva. Some of the guns made their way to Pitcairn Island.

Bligh's tomb is in St Mary-at-Lambeth Graveyard, London. One of the homes that Bligh lived in later in his career is opposite the Imperial War Museum in London.

He has a house in Lambeth which looks very interesting:

He had a crew that mutinied a second time - unlucky or a poor captain?

Hi Hels - another interesting post. You may be interested to know that Bligh also resided a number of years in the Manor House at Farningham, Kent (not far from where I live), I believe with his daughters.

I apologise Helen reading through your detailed replies I see you mentioned the house already. To make up I finally found the auction:

"He had a crew that mutinied a second time - unlucky or a poor captain?" Good point. I am mabivalent about why, of all the naval officers in history, Bligh had such bad luck. His personality must have been sooo difficult that underlings risked hanging, rather than work with him. And some were indeed hanged.

Excellent. Since Bligh lived at the Manor House in Farningham, Kent for the last few years of his life, we can assume that by that time, he was retired and financially comfortable. And some of his six daughters seemed to still be living at home with dad, either by choice or because they had no home of their own.

Have you seen the house? Is there any plaque or other memorial, to mark the site as Bligh's home?

good luck with the Uranius Antoninus Gold Aureus Emesa Mint. I hope your parents left you an enormous estate or you won the Lotto :)

I adore these paintings from the 18th Century and the intricate stories they tell.

Hi Hels - The Manor House at Farningham is a private residence and there is no plaque that I have seen so far.

It is not well known that Bligh lived there. I stumbled across it in an old local history book I borrowed from the library.

I agree. Historians tend to use text based records to analyse historical events. But art historians are prepared to use paintings, sculptures, treen, silverware, architecture, porcelain, garden landscaping ... anything that will enable a good look at a time long gone.

If it was publicly recognised as a Bligh residence, I might have asked you for a photo. But I must tell you about a sad story.

I was analysing the architecture of a beautiful old house that was up for sale, and published it in this blog. For months noone lived there, then a new owner moved in. He was very angry that his house appeared in my blog, without his permission, even though he didn't own it at the time. The real estate agent who handled the sale wrote me a very nasty letter.

So I won't ask you for anything to do with a private home, even an historically important one :)

For those interested in the prices for the medals, see Auction News Network:

Ferdinand Bauer (1760–1826) was an Austrian born botanical draughtsman. In the early 1800s he was one of six scientists selected to join Captain Matthew Flinders in the scientific expedition that would chart Australia’s coastline and document its flora and fauna. Bauer returned to England in 1805 with sketches of more than 1500 plants. This exhibition draws on the McCarthy Collection of prints and illustrated publications by and about Bauer, to explore the fusion of art and science in his remarkable work.