Urban photographic art of the 50s and 60s: Wolfgang Sievers and Mark Strizic

Leonard Joel Auctioneers here in Melbourne are having their Annual Photographic Auction on Sunday 19th June 2011 at 2pm. I don’t normally get involved in promoting or advertising private companies, but the stars of the auction are “my” photographic artists.

Other bloggers will understand that I feel quite territorial about Wolfgang Sievers (1913-2007) and Mark Strizic (b1928).  Sievers left Germany in 1938 and Strizic left Germany via Croatia in 1950 - and luckily for photography and for Australia, they both chose Melbourne as their home. 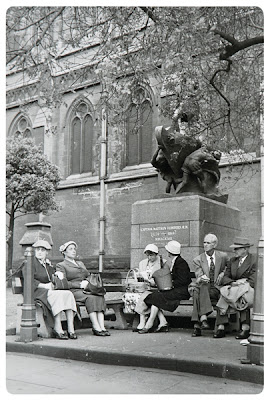 Readers may remember The Paris End of Collins Street: Photography, Fashion and Glamour Exhibition at the National Gallery of Victoria (2006). This exhibition showcased the work of some of Melbourne’s best-known photographers from the period up to the 1960s, including Athol Shmith, Jack Cato, Julian Smith, May and Mina Moore, Ruth Hollick, Helmut Newton, Henry Talbot and Wolfgang Sievers. All of them had established studios in the glamorous, Paris End at the top of Collins St.

Helmut Newton is well represented at the Leonard Joel auction, while Athol Shmith and Julian Smith are involved in just one auction lot each.

Emma Matthews, writer, curator and art historian, has worked with Melbourne photographer Mark Strizic over the past ten years. On Wednesday 15th June 2011, she will present a discussion on Strizic's images which documented Melbourne's citizens and cityscapes in the 1950s and 1960s. Emma Matthews wrote Mark Strizic, Melbourne: Marvellous to Modern, published in 2009.

Hello Helen:
We are well able to understand your interest in the work of these photographers.

About two years ago we were invited to attend the Private View of an exhibition of the work of Robert Capa who left Hungary at an early age for the United States. Their gain, Hungary's loss.

ohhhhhh Jane and Lance
yes yes yes!! I know Robert Capa's work from the Spanish Civil War, albeit only published in book form.

It makes me think. When I started uni in the mid 1960s, photography wasn't included in the fine arts department as a legitimate subject. Now it is, but I wonder how much I missed out on.

I visited Mark Strizic's home near Melbourne. His photos were not sorted in any particular order, but the older ones looked very historic.

Not come across them before, but I love urban photography so thanks.

it is a fascinating medium for all of us, but even more fascinating I suspect for people who remember the 1950s and 1960s well.

Emma Matthews gave an interesting discussion paper. The presentation of all the postwar photos in one room was even better. What happened to these special photos?

Most photos sold at the auction. For the results, see http://leonardjoel.com.au/auctions_results_view.php?auction=219&year=2011

The shame is that they won't ever been seen together again.