The Old Masters - Berenson and Duveen

Joseph Duveen (1869-1947) was from a Dutch-English family. He loved pictures and knew a lot about British art, but he was not an academic. Lithuanian-Italian art scholar and critic Bernard Berenson (1865-1959) was not a smart businessman, but he had a very expensive lifestyle. So it was sensible that the two men should get together in a professional partnership, as I noted in an earlier post. Berenson found and authenticated pictures for Duveen, and Duveen paid him a share of his firm’s profits. The Old Masters opened up in New Haven with an American cast, 2010

Clearly the Jewish contribution to the European art world was in part a function of specific historical and sociological circumstances. Consider the major art dealers and scholarly art connoisseurs of the early C20th: Alfred Flechtheim, Herwath Walden & Paul Cassirer in Berlin, Joseph Duveen in London, Jacques Seligman, Daniel-Henry Kahnweiler and Berthe Weill in Paris. Heinz Berggruen and Daniel Wildenstein came a decade later. Every single one was Jewish! Even Bernard Berenson, a much earlier convert to Catholicism, was still seen as having a fine Jewish brain.

I wonder how much interaction there was between this amazing group. I also wonder how much opposition they faced, given they were at the forefront of the avant-garde, especially French modernism.

"The Old Masters" is the name of a play that was first performed at the Birmingham Repertory Theatre in June 2004, then at the Comedy Theatre London from July 2004. It was written by Simon Gray and directed by Harold Pinter. The play opened in Bernard Berenson's gardens, Villa I Tatti near Florence, one summer night in 1937. Berenson, the famous art critic, was increasingly anxious about the state of his finances. His wife, Mary, was in poor health while he continued to have an affair with his secretary.

Joseph Duveen's assistant Fowles arrived to deliver a copy of a painting, and to tell Berenson that Duveen would like him to reconsider his attribution of a painting, The Adoration of the Shepherds. Berenson had already declared it to be by Titian, but Duveen wanted him to change his mind and attribute it to Giorgione. Duveen was keen to sell the painting to the American art collector, Mellon, who specifically wanted a Giorgione. Other art critics had already decided it was a Giorgione, but Berenson, whose reputation was pre-eminent, refused to change his mind. Fowles left. 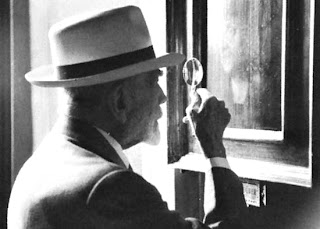 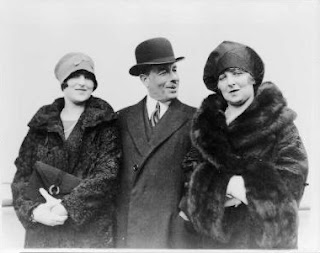 Duveen on a cruise to the USA with wife and daughter

Later that evening Duveen arrived, unannounced, to convince Berenson to change his mind in person. From there, the intense nature of their long and largely satisfying working relationship unfolded. The timing in 1937 was not coincidental. They were two Jewish intellectuals with anti-Semitic chaos gathering around them, particularly worrying with the rising power of Mussolini and fascism.

I hadn’t read or seen the play, so my class here in Melbourne had to rely on one of our art history students who had seen the play in Britain. She said the play tackled the confusing world of the art market, raising questions of taste, provenance, financial values, the honesty or otherwise of private interests in the marketplace, and the historically documented relationship between Duveen and Berenson. At the end of the play, the student was still not sure what was most important - professional connoisseurship, popular taste (which changes from generation to generation) or realistic financial valuations.

The play is of special interest to American audiences as Duveen truly did help wealthy Americans (eg Mellon, Rockefeller, Frick, Huntington, Morgan and Kress) to amass great collections of Renaissance, early modern & modern art. Simon Gray’s The Old Masters opened in New Haven Connecticut in 2010 and will move onto Broadway this year.

Hels, regarding my post on the Co-Masonic Temple today, from what I can gather, it seems Co-Masonry or Co-Freemasonry is a form of Freemasonry which admits both men and women. I'd never heard of Co-Masons before seeing it on this building. I've added something to my post.

I've just been re-reading Colin Simpson's book about Duveen and BB - "The Artful Partners". I coordinate a members' book club for the Des Moines Art Center and I think it's high time the group was introduced to these two magnificent characters. I've read other books about them - do you have a favorite or a particular point of view you'd like to share? Love your blog!

This sounds like a really interesting play. I do hope the MElbourne Theatre Company consider it for presenting at the next season? We are the Art Capital of Australia after all! ;-)

Jim
I had never heard of it either.

I do hope you find an architectural source for this building. Creating links is one of the great joys of photographing and understanding buildings.

Kim
well done you! You are quite right about introducing Duveen and Berenson to your art book club.

The work I relied on mostly for my own post was Meryle Secrest's book, Duveen: A Life in Art (2004), based on the Duveen Brothers' own archives. She also wrote Being Bernard Berenson (1979) but I haven't read that book.

To see my first post, go to "Joseph Duveen, art dealer extraordinaire". Its url is http://melbourneblogger.blogspot.com/2009/05/joseph-duveen-art-dealer-extraordinaire.html

The trouble is this. If I asked British, Italian or American art historians, they would certainly know about Duveen and Berenson. They may even know about the play, Old Masters.

But if I talk about Duveen and Berenson to Australian art historians, I get blank stares.

So the Melbourne Theatre Co could certainly put on the play, but it would be like seeing the story of China's Boxer Rebellion - interesting, remote and a bit exotic.

Hello Helen:
One can possibly only guess at the rivalry and intrigue of the art market, something which, we believe, continues into our own times. The play you mention sounds fascinating; we have not seen it.

Bernard Berenson 'The Passionate Sightseer' gives, as you may be aware, a very good insight into the life of this exceedingly intelligent, and difficult, man whilst his 'The Italian Painters of the Renaissance' is, in our view, without equal.

The best thing about blogging is that I ask for reading suggestions on topics close to my heart, and people give them. Bless them. And you :)

The worst thing about blogging is that I get a copy of all the reading suggestions that readers make, and then have to read them. My bedside table fell over from the weight :)

I will certainly read 'The Passionate Sightseer', but not to learn about the intrigues of the art market. Berenson seemed very scholarly, but not very businesslike.

I live close to New Haven and saw "The Old Masters." Berenson was played by Sam Waterson of "Law and Order" fame but the actors who played his wife, Mary, and Joseph Duveen stole the show.

You give a very good outline. It was a fine drama that explores some universal themes. I'm sure Melbourne audiences would enjoy it, especially since it will introduce them to the mysterious Giorgione.

I had a look at your blog... you must have a very soft spot for Giorgione (of course) but probably for Duveen and Mellon as well.

I also see a lot of Australian references in your work. Always a good thing :)

Fascinating. Considering the quality of Jewish art stolen by the Nazis, there was some serious collecting going on for a long time,

I have more than a soft spot for Giorgione but have little interest in Duveen and Mellon. My feelings are ambivalent about these collectors who plundered much art from their sacred surroundings (something discussed in the play), but at the same time saved the art for posterity.

I'm glad that my interest in Giorgione is shared in Australia. Jaynie Anderson, one of woeld's leading Giorgione specialists, still teaches, I believe, at the U. of Melbourne. Also I've had much back and forth with Australian blogger 3 Pipe Problem, on Renaissance issues.

Colnaghi say they played a vitally important role in the art market of the Gilded Age, establishing
Colnaghi’s pivotal position and laying the foundations for a long tradition of connoisseurship in the Old Master field.

Why did Simon Gray get fascinated by these two gentleman? Does he have a background in art history himself?

Nonetheless he said he was mesmerised by the "epic confrontation between the two morally crippled Titans" (Gray's words) and couldn't resist the dramatic potential for both huge conflict and great respect.

The play sounds fascinating! Esp. considering the connections to the Mellons, Rockefellers etc. Thanks so much for discussing it here! How lucky to have a student who had seen it.

In the lecture that day, I was discussing how Renaissance and early modern art works were sold in Italy during the 18th century to cashed-up Grand Tourists. They shipped the art home and hung them on the walls of their new stately homes, once they settled back in Britain and married.

British death duties were introduced in 1894, and by the early 20th century, stately home owners in Britain were looking to sell their art works to cashed up industrialist families in the USA.

So the topic of art scholars and agents was an important part of understanding how the same art moved from one nation to another. What I didn't know about, and was pleasant surprised by, was the play.

I love learning from bloggers of course, but also from students :)

Now I want to see this play!

Patty: Perhaps he was "inspired" by the success of Alan Bennett's TV drama, A Question of Attribution (1991)? This also deals with art, questions of appearances v. realities, a Venetian painting (s Titian), and a battle of wills between two strong personalities (Anthony Blunt and the Queen)....

This is spooky. I found your blog in the Art History carnival and wrote a (hopefully) thoughtful response to your review of Hare With Amber Eyes. But the Comment disappeared into the ether, without a trace :(

Now, 15 mins later, I find your response to Old Masters :) Life is good!