Rembrandt and colleagues: the Book of Esther 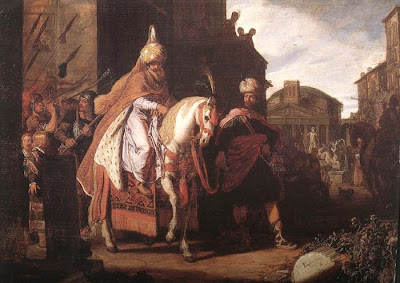 Triumph of Mordechai, by Pieter Lastman, 1624

Between 1624-1685, Rembrandt van Rijn, his colleagues and then his students created scenes from the Book of Esther. They took their themes from various stages in the Esther story, intense, full of imminent danger, sometimes highly decorative. The paintings were almost all of fine quality, so my research questions published in The Jewish Magazine, Feb 2008 did not deal with connoisseurship. Rather I was asking what was the endless appeal of this slightly obscure, historically questionable post-Biblical Jewish story to a particular group of 17th century Dutch Christian artists?

Calvinist collectors in the Dutch Republic WERE often very interested in Old Testament art; Calvin had advocated careful study of the biblical narrative, from both Testaments equally. But a general interest in Biblical stories does not explain why the Book of Esther, in particular, was popular. There have been three main reasons offered to explain the popularity of the Purim story: 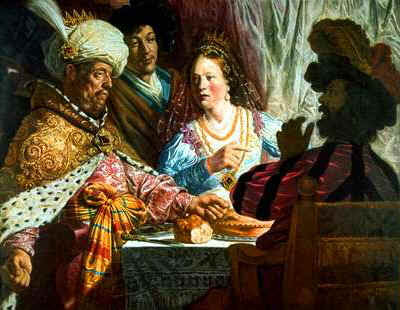 1.)  The Netherlands had a free open market, religious tolerance and a broad intellectual life (Brown et al 1992). Jewish merchant families had both the finances and the taste to live well and to buy art for their increasingly attractive homes. Naturally they would want to buy narrative tales based on much loved  Old Testament stories.

What was Jewish Holland like? The Dutch East India Co., founded in 1602, had a monopoly on all profits from trade east of the Cape of Good Hope. Lisbon had been conquered by the Spanish so the Dutch had to find their own way to the East for spices. Luckily the Portuguese Jews, who'd fled their country, brought a great deal of experience and expertise with them. Eventually the Dutch East India Co. became a public company, and commerce expanded to the extent that the Dutch Republic was culturally and economically the most flourishing country in Europe. And by then, Dutch Jews were allowed to practise their religion. They lived their lives openly, surrounded by all the religious and community facilities they required. 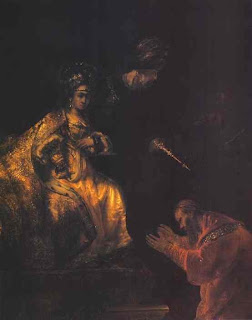 Haman Begging for Mercy, by Rembrandt, 1655

2.) In 1609 King Philip III of Spain agreed only to a 12 years' truce with the Netherlands. Freedom for the tiny Dutch nation arrived, after 30 miserable years of war. But the Netherlands were still at risk. Renewed in 1621 as part of the wider European conflict of the 30 Years' War, the Dutch battle for independence was continued until 1648. Via the Peace of Westphalia, Spain finally and formally recognised the independence of the United Provinces.

The Dutch, well versed in the Bible, saw themselves as The New Israel and their tiny country was likened to the land of Canaan. The leaders of the revolt in the Netherlands became identified in general with Biblical heroes, while the Spanish appeared to them like tyrants eg Pharaoh, Haman and Nebuchadnezzar. Every Dutch citizen would have either remembered the tragic war against Spain from his own experience or would have remembered his parents' stories. By celebrating the original Purim story, tiny Netherlands could explain God's miracle in their own generation.

Consider the timing of the emergence of Queen Esther paintings in the Netherlands. After only 12 years of independence, by 1621 the Dutch could see their freedom at risk again. Purim stories appeared there for the very first time in 1624 and 1625, by Lastman, Lievens and others. The audience could easily recognise the figure of Haman, with his idolatrous demands, as a representation of the hated Spanish. Esther and Mordechai were clearly personifications of the virtuous, pious Dutch. The artists paid careful attention to material and emotional detail, and often dressed the characters in contemporary garb, to reinforce the scene's moral and civic lesson.


The King and Queen with Haman, by Rembrandt, 1666

3) Rembrandt was personally fascinated with the Old Testament and he chose to live in a Jewish area of Amsterdam. He and his students were naturally drawn to Jewish characters, Biblical and contemporary. Both Testaments provided subjects for his artistic output, and counting his paintings etchings and drawings, I would have to admit that New Testament themes predominated. And yet the impression remains that the Old Testament held a greater attraction for him.

In 1634 Rembrandt married the wealthy Saskia van Uylenburgh, niece of a successful art dealer, who also lived in the Jewish quarter: Jodenbreestraat. Her money allowed the young family to live a life of prosperity and joy, and to buy a house in the main Jewish area. The family lived on the lower floors of the house, leaving the first floor for his studio. Rembrandt had at least 50 pupils and followers who worked there.

Although there was probably very little connection between Dutch Jews of the mid 17th century and Biblical Jews in the Middle East, the Jewish environment in which Rembrandt lived helped him get a feel for the Old Testament's world at the source.

Zell (2002) found a positive sympathy in Rembrandt to Judaism and to Christian messianism, via a group of philo-semitic Protestants. Zell saw that Rembrandt became intimately familiar with the deeper meaning of the Old Testament via his close friendships with two of the most important Jewish figures in Holland. They were the scholarly Rabbi Menasseh ben Israel, 1654, owner of Holland's first Hebrew printing press, and the erudite physician and community leader Dr Ephraim Bueno, 1647. They were in and out of each other's houses, studios and publishing houses. Many etchings of these two famous Jews survive, mostly by Rembrandt, Govert Flinck and Jan Lievens. 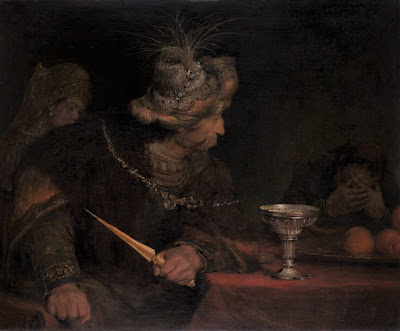 Reverend Mom and Women in the Bible blogs have a wonderful painting called The Banquet of Esther 1645 by the Dutch artist Jan Victors (1616-76), a student of Rembrandt van Rijn. The NGV in Melbourne has a Purim painting by Arent de Gelder, Rembrandt's last pupil. The painting, King Ahasuerus condemning Haman 1680, shows the moment in which Esther unmasks Haman as the true enemy and Ahasuerus dramatic­ally draws his dagger, foreshadowing the later execution of Haman.

Wiki also has a very fine picture by Edwin Long and offers some interesting points about Esther representing the feminine princple which artists may have picked up on.

I wonder why Edwin Long chose to depict both Queen Esther and Queen Vashti. He made them both beautiful, but it is difficult to see who was the heroine and who was the anti-heroine, if there was one at all.

I may be wrong, but I cannot remember a single 17th century Dutch artist who depicted Queen Vashti. Yet Veronese, Gustave Doré and even some of the late 19th century Orientalists did. All of which might give us more confidence in the good qualities that Queen Esther symbolised to those brave C17th Dutchmen.

I would love to understand Edwin Long's motives, or his patron's. Artists rarely paint in a moral vacuum.

Purim sameach.
Hope you had a good one.

Thank you Ilana
the grandchildren dressed up and looked a treat! Some holidays are no work and all fun :)

Good work. I read the Zell book "Reframing Rembrandt" at university. It was refreshing to find a political-religious explanation to an art question.

agreed. Artists will rarely, if ever, sell works that are out of tune with contemporary thinking. So I am sure that Zell is correct about mid C17th Dutchmen, seeing themselves as The New Israel and seeing the leaders of the revolt against Spain as Biblical heroes.

Of course an artist might be happy to never sell a single work in his entire life, living instead from his parents' charity or starving in a garret.

This blog is capitalist, bourgeois, and against the common man. I am going to use this as an example for my comrades online to see what makes one bourgeois

John
thanks for reading the post. I am passionate about Lastman, Rembrandt, Lievens, Victors etc.

My Mum's favourite holiday is Purim but I just like the Hamentashen. I find it incredible that there are so many examples of Jewish acceptance in European history. I seemed to think in terms of black and white in the past and never gave much though to the centuries before the holocaust.

Once the Netherlands freed themselves from Spanish domination,their lives much have been very satisfying. My image of Dutch trading companies, scientists and artists is one of success. Interesting post.

Emm,
you must read a book like "The Pity Of It All: A Portrait of the German-Jewish Epoch 1743-1933" written by Amos Elon. It is the most wonderful celebration of brilliant Jewish writers, philosophers, scientists, architects, book publishers, musicians etc. And that is just Germany!

The Jewish contribution to Dutch society was memorable as well, but that isn't as shocking to our modern sensibilities since the Dutch were always a moral society.

student of history,
17th century Netherlands was punching above its weight. This tiny country had (in my humble opinion) the best town planning, the best trading companies, the best merchant navy, the best organised system of care for orphans and widows, the best art, the most tolerant religious system, and the most sophisticated map makers and astronomers.

A digital record has been made available on NGV Collection Online for the painting "King Ahasuerus condemning Haman" (c1680) by Arent de GELDER.

Since the de Gelder painting is not on display at the gallery just now, I added it to the blog post. It is very dark and bleak.