Augsburg may well have been shaped by the trade in salt and silver in Roman times and by its sophisticated canal system, but Roman wealth was not enough to explain the demand for silver and gold art in Renaissance Augsburg.

The route to Rome developed, over the centuries, into a main trading route, linking Augsburg to other trading towns. After all, Augsburg was located in the south of Germany, not very far from the modern borders with Austria (to the east) and Switzerland (to the west).

By 1276 trade and banking were so important to this otherwise ordinary town that the good burghers of Ausburg were able to make their home into a Free Imperial City. The local municipal government was able to make its own plans, raise its own taxes and legislate for its own laws. 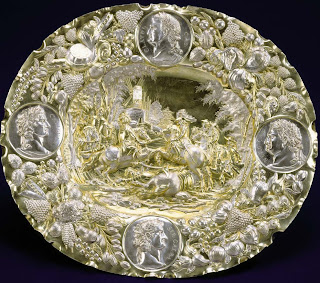 Money was being made hand over fist and you can see that Maximilian Street, bordered on both sides by the original stately homes, witnessed the city's affluence in the days of the famous Fugger, Peutinger, Welser and other famous merchant families. I say “famous”, but for the purposes of this post I should have said “rich”. So let us include some of the important banking families: the Baumgartners, Herwarts and Höchstetters.

But power was being distributed more widely than expected; Augsburg's guild constitution provided that all the craft guilds were to send representatives to the Great and Small Councils. Although the patricians retained the mayoral position, the guilds actually shared power with the Great and Good Families. Throughout the 16th and 17th centuries, the Augsburg economy boomed because of its export of gold and silver art, armour, the establishment of textile manufacturing, and the city's continuing role in banking and finance. 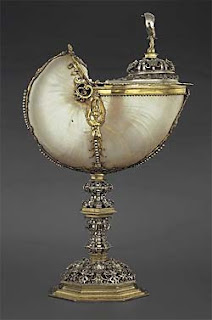 Wealthy, cultivated and powerful families became wonderful patrons of gold and silver art objects. And the demand must have been endless. Even when Augsburg had only 30,000 inhabitants, some 260-275 of them were occupied full time as master gold and silversmiths.

Although the objects were for domestic use rather than for public use, these objects still had to be grand enough to decorate halls designed for solemn ceremonies, large receptions and sumptuous banquets. Examine, for example, the gilt silver dish made and embossed by Abraham Waremberger in Augsbug. I would love to know just how heavy and how broad this dish really was.

Some art objects were clearly ceremonial or decorative, but not necessarily functional. A nautilus cup with silver gilt mount, made by Ulrich Ment in Augsburg during the early 1620s, had the outer layer of the shell removed to reveal the lustrous inner layer.  Sometimes the ornate lids of nautilus cups were detachable, as was the case with other forms of covered ceremonial drinking cups. But even then, I wouldn’t have allowed my teenage sons to play soccer in the dining room.

And not just private families. In 2008, The Moscow Kremlin organised an exhibition of 500 Augsburg masterpieces, often given as ambassadorial gifts by the representatives of the Polish-Lithuanian Commonwealth, the Holy Roman Empire, Denmark and Sweden. The display included gold and silver trays, tankards, ewers and decorative sculptures that were placed near fireplaces, all of which glorified Augsburg and its silversmiths, and thrilled the recipients. A lidded silver jug, made by Melhior Gelb in the c1654, was decorated with embossing and pouncing. This was an ambassadorial gift, brought by King Charles X Gustav of Sweden, in 1655. A silver double goblet, made in Augsburg between 1576-1583, displayed casting, embossing and pouncing. 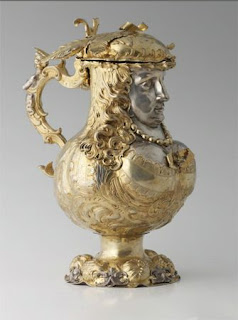 In Augsburg itself, the place to visit would be The Maximilian Museum. It displays many fine exhibits from the city's great silver- and goldsmith artists. And for a very useful reference, see Lorenz Seelig Silver and Gold: Courtly Splendour from Augsburg (Art & Design), Prestel, 1995. 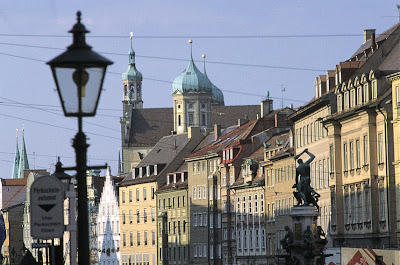 I heard your lecture on Augsburg, but I can't recall hearing why many of the city's silver treasures were destroyed. Does our gallery have any pieces that were saved?

I can't find any evidence of Augsburg silver in particular being destroyed. But I can give you two examples of when a ruler felt the need to melt down all the silver art in his kingdom:

1. The War of the League of Augsburg (1688–97) was another miserable war fought between King Louis XIV of France and the rest of European in a giant alliance that included King William of England, Holy Roman Emperor Leopold I, King Charles II of Spain and all the princes of the Holy Roman Empire. France was so drained by the costs of this war that Louis XIV had to have all the vast amounts of silver art (including his throne, furniture, mirrors, chandeliers, dining room ware) at Versailles melted down in 1689. Soon every other nobleman in the country had to do the same.

2. The early Prussian Kings needed enormous amounts of silver art for ceremonial and military dinners eg enormous tankards, plates and centrepieces used at smoking parties with officers at the Hall of Knights at the Berlin Palace. Much of the Prussian Royal silver was melted down to finance wars, especially by Frederick the Great in the Silesian Wars of 1740-5.

Beautiful elaborate stuff but examine the Viennese silver now at the NGV. Sorry about comparing apples and oranges but Koloman Moser, Dagobert Peche and others designed blissful silver that was smaller, lighter, and easier to clean.

artlover,
not only apples and oranges, but you are comparing the 17th century with the turn of the 20th century.

Augsburg silver was made for royals, noble families, the church and fabulously wealthy merchants. The more complex and heavy the silver designs, the more valuable it appeared to be.

Vienna Secessionist art objects were made for ordinary middle class families who aspired to be elegant but never royal.

The NGV has some stunning Viennese silver *agreed*.