The Calais-Mediterranée Express was created by a private French railroad company, the Chemins de fer de Paris à Lyon et à la Méditerranée, to take wealthy families to the French Riviera where they might avoid winter in the northern hemisphere. This luxury night express train ran between Calais and the French Riviera from December 1922 until the very eve of World War Two. Everyone referred to the Calais-Mediterranée Express as Le Train Bleu, because of its very elegant dark blue sleeping cars.

In 1924, Le Train Bleu inspired a ballet of the same name, created by Serge Diaghilev and the Ballets Russes, with a story by Jean Cocteau, costumes by Coco Chanel and a scenic curtain painted by Pablo Picasso. I had seen many of their fabulous costumes at the Melbourne Exhibition but knew nothing about the ballet Le Train Blue. Now I am interested in the Ballets Russes because of the collaboration between artists of different media and from vastly different nations.

The French composer Darius Milhaud was commissioned to write the music for Le Train Bleu by impressario Serge Diaghilev.  As contemporaries expected, the setting for the ballet was an English Channel beach resort when the aristocratic women and the playboys came out to parade in their elegant and oh so modern bathing suits. Games and socialising were portrayed against the ocean sounds in the background. The ambiance Milhaud sought was that of a light and friendly French operetta. Yet when opened in Paris, Milhaud was attacked for lack of seriousness and occasional vulgarity. 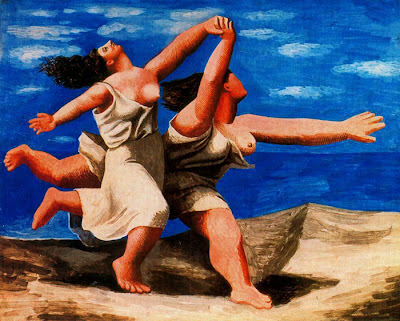 After 1917, the Spanish artist Pablo Picasso was involved in creating the designs for nine ballets including L'Apres-midi d'un Faune. He was in a close working partnership with artists like Jean Cocteau, Erik Satie, Igor Stravinsky, Claude Debussy, Leonide Massine and Vaslav Nijinsky.

Picasso’s backdrop for Le Train Bleu, a giant 10.4 x 11.7 m in size, was called Women Running On The Beach, bounding over the sand against a deep blue sea and sky. Not quite original, the design was actually an enlargement of "Women Running on the Beach", a watercolour he had done in 1922. I don’t like this image because the women were muscular giants. But I suppose the drop curtain was typical of Picasso‘s early 1920s work in its monumentality and neo-classicism.

Russian Bronislava Nijinska (Vaslav’s sister) choreographed five modern ballets for the Diaghilev's Russian Ballet during the period 1921-6. For Le Train Bleu, Nijinska created a special ambiance through the language of dance. She introduced angular and geometrical movements and organised dancers on stage as interactive groups that reminded the viewers of golf, tennis and beach games. Nijinska herself performed in the role of a tennis player. Nijinska worked with plot writer Jean Cocteau and composer Darius Milhaud.

French designer Coco Chanel created the costumes for Le Train Bleu, a ballet that brought together tennis players, golf champions and sun bathers searching for adventure. Diaghilev’s directions for the costumes were: “Instead of trying to remain this side of the ridiculous in life, to come to terms with it, I would push beyond. To be truer than true.” So rather than designing special theatrical costumes for Le Train Bleu, Chanel dressed the dancers in actual sports clothes from her collection. She didn’t attempt to veil reality; rather, she brought it to life. 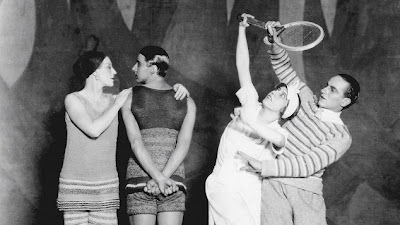 Some of Chanel's costumes for Le Train Bleu, 1924

Coco Chanel’s creations for the Ballets Russes’ Le Train Bleu are now at the Victoria & Albert Museum in London. The exhibit is called Diaghilev and the Golden Age of the Ballets Russes, on from Sept 2010 until Jan 2011. Jbrackett saw the exhibition objects and said “the overwhelming, glorious artistry of Diaghilev was brought alive again through the sumptuous, riotous colours of the costumes (with the stage lighting bouncing off the silks and satins), all seen against their appropriate scenery, and heightened through the music and dance performances”.

Let me add one more element of international collaboration, many thanks to ballet magazine. English dancer Anton Dolin was born in 1904. His mother took the young lad to the Coliseum to see the great Astafieva, who impressed him so strongly that he insisted on taking lessons from her: a key decision, as it was in Astafieva's studio that he was first seen by Diaghilev. He appeared briefly in the famous Sleeping Princess season in 1921, and joined Diaghilev's company formally when he was 19. Although he only danced with the company for two seasons in all, he took many leading roles. And here is the important point for this particular post. The great Nijinska created for him the lead in Le Train Bleu, which was so closely tailored to his extraordinary athletic dancing that no one else ever did it.

Some tiny amount of footage has survived from Ballets Russes in this period (1923-8). Since Diaghilev refused to allow any of his company’s performances to be filmed, it is a miracle that The History Blog found any film at all. It was taken, apparently, in Montreux in Switzerland during their annual June festival, Fêtes des Narcisses.

How much of a critical and financial success was it? I like the Picasso, an artist who often shocks me. They look like "real"women in the extacy of exercise.

according to the V & A exhibition, the Golden Age of the Ballets Russes started in 1912. And I suppose that was true.

But Diaghilev was cut off from the Central and Western Europe during the long war, and in any case times were horrible. So cultural life really returned to normality only in the early 1920s.

I have no idea if the Train Bleu was financially successful or not. What I do know is Diaghilev was certainly commissioning and paying more and more famous artists (from all fields) with every passing year.

Oh how I would love to have seen that at the time - love the images.

Hermes,
I grew up on Russian ballet, both at home and in 12 years of classes with Borovansky Ballet. It was a fantastic experience.

What an enjoyable and interesting post. I wouldn't be surprised to see Karl Lagerfeld design an upcoming Chanel collection inspired by the sportswear and swimming costumes Coco designed; he has often used Coco Chanel vintage pieces or themes as inspirations, and to my knowledge has not yet borrowed from this very early collection.

Wouldn't it be wonderful to travel on the Blue Train? I imagine it to be somewhat like the Orient Express which I admire every time I see the Poirot film. Of course here in north America we are addicted to the automobile, unlike the Europeans with their fantastic train systems, where one can still travel in such a leisurely and chic fashion.

You are so right! Luxury train travel was wonderful then and it is still wonderful now. I hope you get a chance to go on The Ghan, The Palace On Wheels, The Royal Scotsman etc etc.

But what a clever idea for a ballet. An aristocratic beach resort (full of elegant people, clothes, sports, cocktails and transport) was a modern and very amusing theme. Perhaps its idea of love was a bit TOO modern, but hey, ballet was an art form. Not a religious or historical study.

Oh, I'm not familiar with the luxury trains you've mentioned, but I will read up on them. The Royal Scotsman sounds particularly appealing!

Interesting how our first reaction to something new is often criticism or even in some cases fierce attack...
Anything that challenges the status quo upsets many people and as our population ages, I think that conservatism will become more firmly entrenched in our society.
All the more reason for challenging the status quo!

I have a blog about my historic house museum you might enjoy. Please drop by and see it. thanks, Richard. www.myoldhistorichouse.blogspot.com

Nicholas, I couldn't agree more. Especially when the Ballets Russes first arrived in Paris in the years before WW1 - you might have expected people to walk out in disgust or call the Morals Police.

But by 1924, after the war to end all wars, you would hope that ballet lovers would have discovered that the Russians had the most talented and most modern dancers, choreographers, set designers, composers, costume designers etc. And if they didn't, they enthusiastically commissioned the very best dancers, choreographers etc from other countries.

Richard
thanks for popping in. And yes, you do have a blog that is interesting for historians of art, architecture and design (like me).
I will certainly comment on the porch post.
Thank you :)