In 1886, with the completion of the Canadian Pacific Railway terminus on Burrard Inlet, Victoria's position as the commercial centre of British Columbia was clearly lost to the Vancouver. So the city had to begin cultivating an image of elegant civility within its natural setting and its very mild weather. I suppose the two events that most influenced Victoria’s reputation was a] the opening of the gorgeous Empress Hotel by the Canadian Pacific Railway in 1908 and b] the opening of the popular Butchart Gardens 1904-8, 20 minutes drive north of the city. 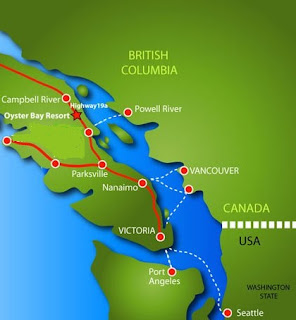 Victoria on Vancouver Island, parallel with the Canadian-USA border

The concept of spectacular gardens originated with an effort to improve an unattractive, exhausted limestone quarry site on Robert Butchart’s family estate, pioneers in the manufacture of Portland Cement in Canada. But it was Mrs Jennie Butchart (1866–1950), and not her husband, who devised a plan to have tons of topsoil carted into the pit. In one post-WW1 photo, you can see the old cement works still in place, long after the planting had commenced.

Mrs Butchart personally supervised the beautification programme, starting with the exquisite Sunken Garden in 1904. The best photos show the Sunken Garden as seen from the lip of the old quarry and the Ross Fountain occupies what was the deepest part of the quarry. Note that the fountain wasn’t installed until 1964, to commemorate the 60th anniversary of the gardens. The water rises 70’, providing a magnificent display by day, and is brilliantly illuminated at night. 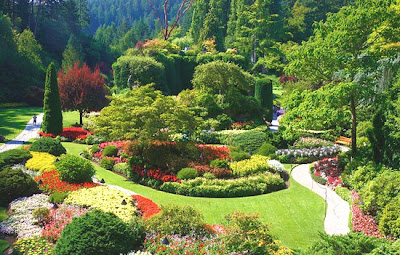 Her project expanded to cover 50 acres of gardens and provided spectacular views to visitors. Apparently Mrs Butchart had a commitment both to horticulture and to hospitality. By 1908, she had added a Japanese Garden, an Italian Garden next to the family’s original home and a fine Rose Garden. Her comments at the time led people to assume she learned of these foreign gardening design principles when overseas, and loved them enough to want to replicate their beauty back at home. Certainly the Japanese Garden was designed by a well known landscape artist who travelled from Japan, at the request of Mrs Butchart.

According to Butchart Garden's own home page, Mr. Butchart took much pride in his wife's remarkable work. He collected ornamental birds from all over the world, kept ducks in the Star Pond and peacocks on the front lawn. He enjoyed training pigeons at the site of the present Begonia Bower, and had many elaborate bird houses stationed throughout Jennie's beautiful gardens. 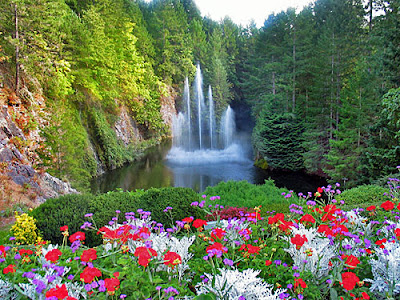 In the early days of the gardens’ history, weekly symphony concerts were hosted by the owners of the estate. Originally the concerts were planned for the pleasure of the extended family and their guests, but eventually it was opened to paying guests. Even now the Butchart Gardens offers a variety of daily concerts and events in summer. Open air concerts take place on the Concert Lawn stage; visitors are invited to sit on a bench or bring a blanket for the lawns. From there they can watch the on-stage performances and exciting musical nights!

And since 1977, on Saturday nights after the concert, visitors wait for the spectacular Fireworks show. The Gardens staff say visitors are unlikely to see another amazing fireworks show like this anywhere else in North America!! 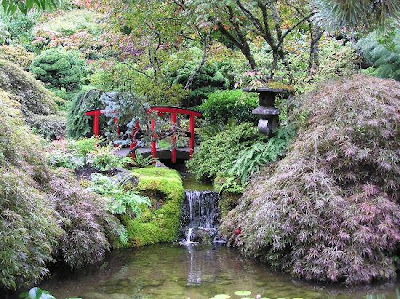 Every summer evening, visitors stroll around the gardens as thousands of coloured lights dramatically light up the gardens. Underground wiring installations and fabulous colours made me think of Tivoli Gardens in Copenhagen.

Personally speaking, I have only visited in summer, as part of a family reunion. But apparently in the autumn, the Japanese garden becomes the main attraction as its red, russet and golden maples join with dozens of varieties of chrysanthemums to create an amazing range of autumn colours. Each weekend in October and November, visitors are invited to tour some of Butchart’s 26 greenhouses, which are filled to the brim with Poinsettias and other holiday delights. 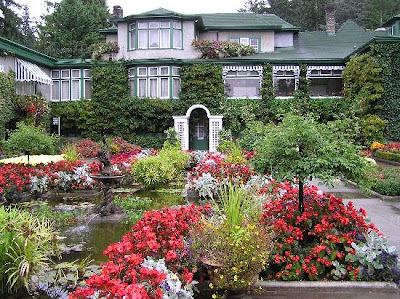 Another winter-time event is the Historical Display. From mid Jan to mid March, the family residence is open for visitors to view memorabilia displaying the development of the Butchart Garden. Furnishings, correspondence and photos allow the visitor to step back into the graciousness of the period. Afternoon Teas are appropriately warming.

For a broader view of Vancouver Island, its wild spaces and easy access to nature, read Heather On Her Travels.

What a great post! I spent New Year's Eve at the Empress Hotel in Victoria - it still is one of the most gorgeous attractions in the city. Do you know much about the history of Francis Rattenbury, the architect for the Empress and Parliament building in Victoria? His life is full of interesting stories (architectural contests! The Crystal Palace! murder!). You can read a little of his life here and here.

I loved reading about the history of Butchart Gardens in this post. I visited there last spring, and was especially impressed with the Sunken Garden (both its history and its beauty). Although I didn't visit the gardens during my recent trip last month, I heard that Butchart Gardens offers a fantastic display of holiday lights.

I spent a few weeks one summer in Victoria - I have very happy memories of the place. I must admit I never visited Butchart Gardens, thanks for englightening me. I do remember the many British style pubs though.

M
When my parents' generation left Russia, the siblings and cousins moved to Canada, Australia or Israel. Every three years we have a big family reunion, last time in Vancouver. The Vancouver cousins organised the most wonderful ferry and bus tour of Victoria and the Butchart Gardens. It was not my first time in Victoria, but it the first time I had a knowledgeable tour guide in tow.

Francis Rattenbury was indeed an interesting character. I agree with your reference that in designing the Empress Hotel, the Legislature and the CPR Steamship Terminal, Rattenbury was putting Victoria on the map. His "entrance to Victoria" is still very impressive, 102 years later.

Mr Doolan,
there is something special about Victoria, isn't there? No very high rise buildings, beautifully maintained shops, a great hotel and super pubs, a busy water front and those flowers *sigh*. Thousands of hanging baskets around town, full of stunning flowers.

If you are going to visit the gardens, you need to allow 20 mins to drive to and from Victoria, an hour walking around the gardens, an hour listening to the concert and 30 minutes for afternoon tea - 3.25 hours.

I like it when extremely wealthy families put something back into their community, as the Butcharts did. It seems fair.

Mott,
*nod*. 1904 was a gilded age for a few very wealthy families who made their obscene incomes from railways, oil, steel etc.

But there is a difference. Henry Clay Frick and JP Morgan gave their fabulous collections to the community _after_ they died. Jennie Butchart dedicated the second half of her life to returning the land from exploitation and ugliness to unbelievable beauty. And opening it up to ordinary families to enjoy.

They really are spectacular.
Sydney - City and Suburbs

I love our Australian climate and wouldn't give up the beach for the snow ever.

But our gardens, even the most beautiful ones, look dull olive in colour and dry in nature, whatever we do. Butchart Gardens are to die for.

As a child of eleven, I had to visit the Butchart Gardens with my parents and was not so happy with the prospect of spending the afternoon looking at a "bunch of flowers." The place was a revelation; I had no idea that gardens could be like that.

it is so difficult, amusing and educating the minds of pre-teens. It was back then and it is probably worse now. It is amazing (and fortunate) that the Butchart staff managed to make garden design interesting.

p.s thanks for reminding me of these gardens, about a year ago :)

I've been to Butchart many times as my brother lived in Victoria for over 30 years. And yes, read up on Rattenbury. A cause celebre

pup and M,
thanks for the Francis Rattenbury reference.

Even after a blogger has visited Victoria several times and written about the Butcharts' garden design, there is still more to learn. My bedside table is loaded up with books and journals, piled up in order of priorty :)

Great post. I live not too far away, in Vancouver, and have many happy memories of exploring the wonders of Butchart Gardens during the summer!

I have been to Canada many times.
In the last few years, spouse and I were in Winnipeg twice and Vancouver twice, and we idly thought wouldn't it be nice to have a small studio-flat in Canada. Just to spend 6 weeks in late June-end of July, you understand.

The relatives in Winnipeg could not have been more hospitable and warm. But once we saw Vancouver and Vancouver Island, we thought that your west coast was the only place for Australians. You live in a gorgeous part of the world!

Hi Helen beautiful post I wish that all big company's that rape the land can replenish it the why Mrs Jennie Butchart did as a way of giving back.

there is nothing quite as immoral as mega-wealthy families who don't pay their fair share of tax, who exploit their workers and who do untold damage the land.

I don't know what sort of citizens the Butcharts were, but I wish other corporate giants would have contributed as much to the community as Mrs Butchart did.

I have only been there in summer but on the two days (not nights) spouse and I visited, the outdoor music and drinks were a total delight.

My family has a reunion every three years in Canada, Australia or Israel. The Vancouver cousins did the best organised tours of all :)

A student of mine was in the Vancouver Island gardens a few months ago and was told an amazing story by their tour guide.

While travelling in Europe, Jennie and Robert Butchart heard the news that both of their Woodland Ducks had been killed by an eagle back in Canada. Robert insisted on going to Germany to purchase new ducks, to carry back to Britain in time for their ship home. After buying new birds in Germany and arranging for them to be sent back to British Columbia, they returned to Britain asap, but they had already missed their ship and had to make alternate travel plans.

Their ship was The Titanic!