Christopher Dresser, porcelain and the laws of ornamentation

Dr Robert Wilson is one of the major donors to the National Gallery of Victoria’s Decorative Arts Department. An exhibition of objects from his collection of 19th Century Ceramics and Glass is being held during this, the 150th anniversary year of the NGV. Since I am a passionate collector of 18th and 19th century porcelain myself, I was very keen to see Wilson's pieces from Minton, Worcester, Copeland and Burmantofts. However there is a slight difference. My treasures are readily available in the auction hourses, of average quality and of average prices. Wilson’s treasures are rare, of superb quality and fetch top prices. 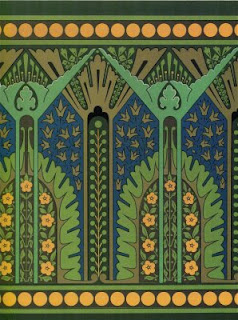 In this post, I want to concentrate on Christopher Dresser 1834–1904, partially because the NGV exhibition has an entire case filled with his art objects. Dresser was one the most important and influential designers in the later Victorian decades. It is said that he championed design reform in Britain while embracing modern manufacturing in the development of wallpaper, textiles, ceramics, glass, furniture and silver art. 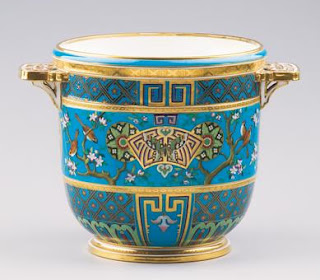 Everyone knows his wallpapers - his patterns were first published in his 1874 book, Studies in Design, and were used on walls and for ceiling decoration. The designs were complex, tight and varied, but the colours were more limited: cobalt, tan, mustard, teal blue, dull green, red-brown, variously combined. Even more importantly, he specified very intricate rules of colour harmony in his books. 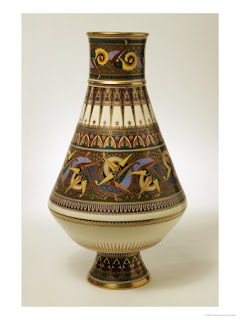 Soon his designs for wallpapers and fabrics could be used on ceramics. Minton and Josiah Wedgwood Companies were delighted to use his work and both companies exhibited his porcelain at the 1862 London International Exhibition, the 1867 Paris Exposition Universelle and in the London Exhibition of 1871. People seemed to love them. 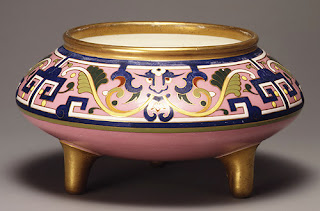 The Aesthetic Movement took place in the late Victorian period from the late 1860s to 1900, coinciding almost exactly with Dresser’s working career. The movement privileged aesthetic values over moral or social themes in the decorative arts. In one sense, its post-Romantic roots did not reflect the more usual Victorian values and so the movement definitely anticipated modernism. A pair of Minton Aesthetic Movement vases c1870 will show you how Dresser interpreted the concept. 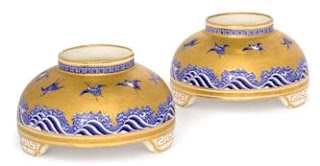 Dresser’s books were important for another reason. This was not an unthinking craftsman, creating randomly. In search of a moral design vocabulary, and true to Arts and Crafts philosophy, Dresser established principles based on Truth, Beauty and Power. Truth criticised imitation of materials. Beauty described a sense of timeless perfection in design. Power implied strength, energy and force in ornament, achieved through Knowledge.

Over the years, Dresser worked with or for many companies, and had a directing hand in some of them eg Minton & Co., Wedgwood, Dresser & Holme of Bradford and William Ault's pottery. Dresser's designs for ceramics in the 1880s appeared from a new Yorkshire factory at Linthorpe near Middlesbrough. A loc­al businessman called John Harrison had been interested in Dresser's theories of art and couldn’t wait to work with him in a ceramics enterprise. The Linthorpe pieces were largely distinguished by their interesting shapes and their decorative glazes, not by finely designed patterns.

If Dresser separated himself at all from the Arts and Crafts Movement, it was by recognising the benefits of the industrial revolution. He was, for example, perfectly happy to design and decorate machine-made objects. The application of the gold floral band onto the U-shaped vase was produced by another industrial technique, that of transfer decoration. 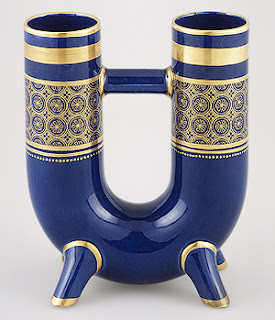 He remained committed to analysing good design, writing books and journal articles that dealt with the use of materials and the simplicity of form. For a Bauhaus fan like me, it is amazing that Dresser could have "discovered" the concept of form following function decades earlier in Britain, rather than post-WW1 in Germany. But that might also explain why, after his death in 1904, Dresser's reputation plummeted and he was virtually forgotten by the 1930s.

The NGV exhibition ended 1st January 2011. If you could not get to the NGV, I recommend you read Shock of the Old: Christopher Dresser's Design Revolution, Victoria & Albert Museum, 2004. Another exhibition, Christopher Dresser at the Fine Art Society, opened in London in September 2014. The review was very impressive. 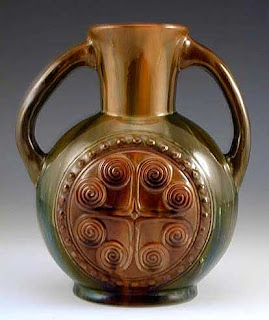 His designs reminds me of the work of Richard Morris Hunt. Theses pieces are unique!

I am not familiar with Hunt's work, but I do know that in each generation there were artists, architects and designers who used traditional forms to push boundaries ever forward.

I am also pleased that Dresser published his pattern book, and his Laws of Ornament, early in his career. That way we can see that he had a thoughtful base to his work; he wasn't just lurching from one fad to another.

I've always liked his designs, eclectic but the various elements work for me. The Victorian Web has a useful piece on his pottery,

I didn't even mention that Dresser was Head of Art at the Linthorpe Art Pottery in Middlesbrough. Mainly this was because it was later in his career, and the Linthorpe pieces didn't look like the decorative models he developed in his early "laws".

When Linthorpe closed in 1889, its moulds were taken up by Ault Pottery in Derbyshire, and his works looked even LESS like his early decorative laws. Dresser, was under contract with Ault practically until he died.

I saw a wonderful Dresser exhibit in NYC a few years ago and what impressed me most were the shapes of his 'modern pieces' and glazes... some of which looked decades newer than they were... he really was a visionary... oh and let's not forget his iconic toast holder!! Great post about an unsung hero of design, Hels!

sometimes Dresser takes my breath away with his designs, even now. But I wish I had seen the NYC exhibition that you saw, especially if they displayed some of his stunning porcelain objects.

Hels these works by Dresser are just stunning!! Truly unique in design. I love the color palettes you have shown.

Karena, me too. They are gorgeous.

So it is surprising that it is quite difficult to find porcelain that he definitely designed, in galleries and even on line.

Thanks J Bar ,,, happy holidays :)
Dresser's laws of ornamentation were so crisp, his books deserve another reading in our own times.

Thanks for this impartial and keenly observed article on Dresser. Although well known within the history of design, I can't help thinking that he still seems to have been marginalised, his books definitely need more readers.

John
My passions in the decorative arts are silver and porcelain. And even though there is a great deal written about him, as you say, I wanted to concentrate on his contribution to porcelain.

The Wilson Exhibition of 19th Century Ceramics and Glass at the NGV made the timing of this post perfect, but it didn't help much with my historical analysis.

I have added an image of a 1874 pail from the Art Gallery of South Australia because I thought it displayed Dresser's laws of ornamentation so well.

Dresser did not set himself apart from the Arts and Crafts movement - his 1873 Principles of Decorative Design established the A&C manifesto long before the A&Cs existed and years before Morris spoke or wrote on the subject- and Dresser's designs were rarely 'made by machine' (certainly not his ceramics, glass or silver). John Hopper is right, Dresser has been marginalised, with the intention, one suspects, of glorifying Morris, who only ever designed flat pattern.

thank you for commenting.

Since Morris, Marshall, Faulkner & Co opened for business in 1861, I would reiterate that Dresser's career coincided very closely with the Arts and Crafts Movement. However I do acknowledge that The Arts and Crafts Exhibition Society and the The Guild and School of Handicraft didn't start till the 1880s.

I also disagree on the handmade-machinemade debate. Firstly in the absence of a passion for the medieval, Dresser didn't seem very interested in rebuilding the old crafts guilds and using their techniques. Secondly he seemed to actively embrace all modern technologies and materials that created beautiful designs.

Most historians have insisted Dresser designed only for the machine and that Morris only for craft-made objects.Both positions are false. Dresser designed for both methods (Minton and Clutha are craft-made;Brinton carpets machine-made) and as you so rightly point out he used the latest technology when appropriate-hence his designs were affordable. Some Morris products were also made by machine (carpets and woven textiles) but were still too expensive. Strange then, to find Dresser always 'designed for the machine' and Morris only for 'arts and crafts'. More debate please.

I loved the Dresser objects that you showed in lectures. Does it matter than he used machines in his stuff?

student
he became very successful and well known, so clearly using machinery did not tarnish his reputation at all. Perhaps people loved his work even more, and could afford it better.

But I don't suppose using modern machinery made Dresser popular with the true, dyed in the wool Arts and Crafts artists who abhorred mass produced machine-made art objects.

Hamilton New Zealand, Canada, Australia or somewhere else? If the Hamilton Art Gallery is in Victoria, I will definitely get down there these summer holidays.