I was looking at Colonial Film for information about the welcome to, and education of Indian princes in Britain in the late 19th century. Instead I got involved in the Delhi Durbars and will cite Colonial Film as much as possible.

Durbar was a term used in India to refer to a ruler’s court, or to a ceremonial gathering at the court. Towards the end of the British Raj, three imperial Durbars were held in Delhi, each marking important royal events. The first, held in 1877, marked the proclamation of Queen Victoria as Queen Empress of India. The second, held in Jan 1903, marked the coronation of King Edward VII. The last, held in Dec 1911, marked the coronation of King George V, and was the only Durbar that the ruler attended in person.

Called the Proclamation Durbar, the 1877 Durbar was held in January 1877 to mark the coronation and proclaim Queen Victoria as Empress of India. The 1877 Durbar was largely an official event and not a popular occasion with mass appeal, as the later Durbars were designed to be. It was attended by the Viceroy of India 1st Earl of Lytton, maharajas, nawabs and intellectuals. Although it was several decades overdue, the event was supposed to represent the end of the transfer of control in India, from the British East India Company to the British Government. Inside Victoria Memorial in Kolkata is an inscription taken from the Queen’s message, presented to the people of India. 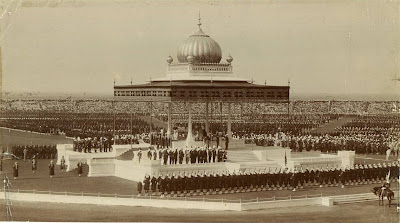 On New Year's Day 1903, newly crowned King Edward VII and Queen Alexandra were declared Emperor and Empress of India. The occasion was marked by a grand ceremony held at the Delhi Durbar, a spectacular festival organised by the British government via Lord Curzon, then Viceroy of India (1898-1905). This Durbar was intended to impress the outside world with British power and influence in India, and to reinforce Britain’s role as a unifying presence in India. 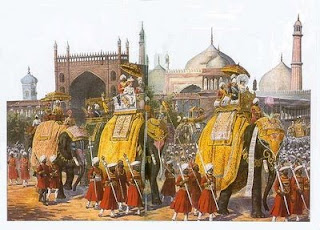 To highlight the glory of the monarchy and its Empire, the 1903 programme of events ran over 10 days. It began with the grand opening procession where the Viceroy, the Duke and Duchess of Connaught (brother and sister in law of King Edward VII), other British and Indian dignitaries paraded through the streets of Delhi. The most spectacular part was the line of Indian princes riding on bejewelled elephants.

Coronation Park, north of Old Delhi had been turned into a gigantic tent city, complete with temporary light railway to bring crowds of spectators out from Delhi. The tent city had its own post office, telephone facilities, shops, a police force, hospital, magistrate’s court, sanitation and lighting systems. Charlotte Cory was particularly impressed with Maharajahs who came with great retinues from all over India. The massed ranks of the Indian armies, under their Commander-in-Chief Lord Kitchener, held daily parades, band practice and polo matches. This Durbar included sports, music, a state ball, a huge display of Indian arts and crafts, and a review of 34,000 troops.

There is an Australian connection to the 1903 celebrations. Mortimer Menpes (1855–1938), an Australian artist, author and illustrator,  published the book "Durbar", which told the tale of the spectacular event and illustrated it in beautiful detail. In June 1903 Menpes also exhibited the pictures he had painted of the Durbar at a fancy London art gallery in New Bond Street.

Rabbiting On has the most wonderful paintings from the 1903 Durbar, with a particular focus on the central figure in the entire process – Lord Curzon. Old Indian Photos has stunning photos. 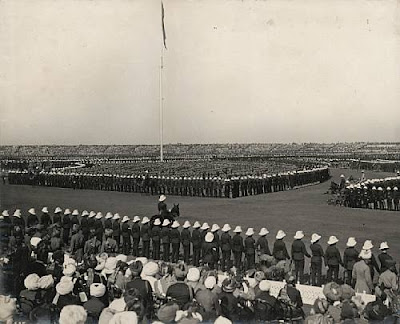 The 1911 Durbar cost over £1 million to mount, and was over a year in preparation. Over 200,000 people were expected for the events taking place in Delhi’s Coronation Park. This Durbar was of course used for particular political purposes. King George announced the reversal of the unpopular 1905 decision that had partitioned Bengal, while also announcing the transfer of the capital of British India from Calcutta, in Bengal, to Delhi.

Royal ceremonials were a popular subject for early newsreels. Consequently this event was probably the greatest effort in news coverage that the young film industry had yet undertaken. Over a dozen cameramen from five different British film companies were despatched to cover the Durbar. Speed was of the essence, and the companies competed with each other to process their films and rush them back to Britain for viewing. The films were hugely popular in Britain, with interest being fuelled by incidences which had been covered in the British press. The films were also distributed widely abroad; to India and the Empire of course, but also to non-British countries elsewhere. The films included the unveiling of the King Edward Memorial Tablet, the Presentation of Colours and the Church Parade. 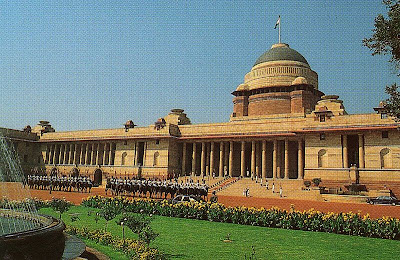 In Dec 1911, King George V laid the foundation stone for India’s new capital, Delhi, rather than Calcutta as it had been. The decision to build a residence in New Delhi for the British Viceroy was taken straight away. This Viceroy’s House was to give the impression of a perpetual and rock-solid British Raj. The building and its surroundings were to be 'an empire in stone', 'exercising imperial sway'. And they were!

How impressed were the Indians with the Durbars, attended as they were by lines of Indian princes riding on bejewelled elephants, maharajas and nawabs? They seem to have been written out of Indian history because nationalists campaigning for Indian independence at the time and in later years did not want to be associated with princely rulers. The princes' perceived decadence was a source of some embarrassment. Nationalists wanted that part of the independence struggle to be be deleted from history because maharajahs were seen as too closely associated with the worst excesses of the Raj.

I was just drooling over Victoria's Durbar room at Osborne House... I never knew the history of the name... till now! Thanks for the interesting information... I think I will redirect to your blog for those that want a little more history!

Lostpastremembered..
good to see you.

Imagine the Durbar Room when Queen Victoria was still alive - rich carpets, gleaming silver and stunning Indian paintings. And I know the queen adored having Indian manservants close to her, fully kitted out in gorgeous outfits. She really took her role as Queen Empress of India very seriously.

I think it of course important not to lose sight of the fact that although in the name of the King Emperor, he was a functionary of the British Government. Ditto anything that is directed at the British monarchy today.

It was really a last throw of the dice for the British in India and the effect was short-lived. Victorias relationships wit he Scottish and India servants is an absolutely interesting subject with room for lots of speculation.

Hermes, the timing question is interesting.

The Indian Mutiny took place in 1857 and almost immediately the British East India Company’s rule was closed down. India was then governed by London through a Viceroy in Calcutta. So far, so good.

What was peculiar about the Jan 1877 Proclamation Durbar, held to proclaim Queen Victoria as Empress of India, was that it supposedly represented the end of the transfer of control in India to the British Government, an event that actually happened twenty years earlier (in 1858)!

British rule remained via Delhi until independence was granted in 1947. Productive and lasting, yes; rock solid and eternal, no.

columnist,
quite right!
The Viceroy of India may have been extremely powerful, but it was only the power given to him to represent Britain in India.

If ever there was a display of imperialism this must be it, such pomp and display makes it very clear who was in charge.

Heather,
agreed, that was the point. The British Raj covered India and the surrounding countries that later became independent. It was a big hunk of the world's peoples and land mass, a hunk the British wanted to impress and dazzle.

My uncertainty is about the princely states ruled by Indian princes, maharajas and nawabs. Did the line of endless Indian princes riding on bejewelled elephants mean they wanted to flex their own power-base? Or were they cowtowing to the real, British power-base in India?

Thank you Helen for this post. I check your blog on occasion but have never posted 'till now! :)

I have been very interested in the British Raj of late, buying books and movies by the ton ("Passage to India" for one, both book and film).

I wanted to know if you knew of any film available of "With Our King & Queen Through India", which was the film shown in Britain of the 1911 Durbar and the ceremonies related to it. I have the film "The Birtish Empire In Color" which shows some of the early color footage.

Adam,
I had not heard of "With Our King and Queen Through India", so many thanks for the reference.

This footage must have been exciting because
1. it was the first Durbar film in colour and
2. the 1911 Durbar was the only one that the British royals attended in person.

I got your contact from the forum on Mortimer Menpas, picked up a book by him called India from a second hand bookshelf. Best book I've seen on India and great illustrations !, just done some background reading on the author, illustrator...

Do you have any books by him, I am after a another book he has done called Delhi Durbar, unable to locate it, I am in Scotland, uk and found out that menpas was a assistant to whistler and hand married his sister. It's a small world, and we had a whistler exhibition and with a mention of menpas in it !.

Thanks for the note, inderjit. Have a look at "The Durbar : Menpes, Mortimer, 1855-1938 : Free Download" at http://www.archive.org/details/thedurbar00menpiala

It looks as if the book is not in copyright, so enjoy!

I have just added a link to your post on the durbar and India's history of its own princely rulers under British rule. Many thanks.

just this semester (2012) I became interested in the work of the film pioneer Charles Urban. And as you so rightly pointed out, probably his most famous production was the documentary With Our King and Queen Through India (1912). How extraordinary that 2 hours of his footage have survived the last 100 years.