As a tourist, I was delighted to see very colourful houses in Mediterranean islands or coastal towns like Sidi Bou Said (Tunisian town), Santorini and Mykinos (Greek islands), Burano (Italian island), Perpignan (French town) and Alicante (Spanish town). In Perpignan houses are painted in bright oranges, yellows or pinks, and the shutters are painted in a colour different from that on the walls. In Cassis near Marseille, the back roads are lined with the brightly coloured homes of fishermen. In Mirepoix, a southern French town near Carcassonne, the brightly coloured houses have high windows, contrasting shutters and slightly sloping roofs. 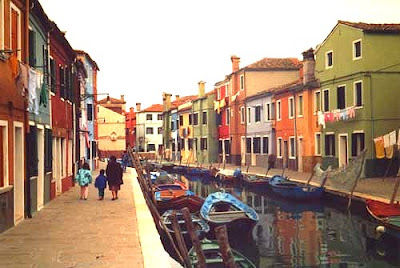 And it did not surprise me to read about equally colourful towns in hot, musical places like Cuba, Curacao, San Juan in Puerto Rico, the barrio viejo of Tucson USA and Zacatecas in Mexico. And thanks to Art Deco Buildings blog for recommending that I have a look at Bo Kaap, Cape Town in South Africa. called the Bo-Kaap area. In a predominantly Muslim section of the town, the houses might be small but they are painted in very bright colours!

My thinking, based on no historical reading whatsoever, went like this: Mediterranean and Caribbean towns are geographically isolated from the mainland and therefore do not have to behave "respectably". Furthermore they tend to be hot, relaxed places where people swim semi-naked, eat under palm trees and sway to tropical music.

Of course heat by itself is not enough of a defining factor. After all, I cannot imagine coloured houses, naked swimming or Caribbean music in very hot cities like Baghdad.

But some cool temperate or cold places were an absolute surprise eg St John Newfoundland in Canada, Honnisvag in Norway, Tobermory in Scotland, Llandeilo in Wales, Cork in Ireland, Bristol in England or St Peter Port in Guernsey. 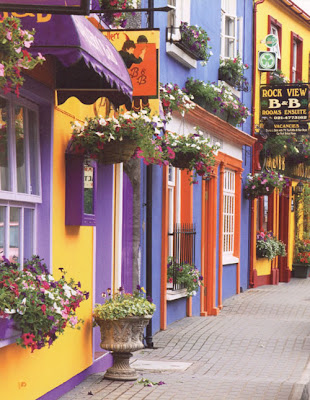 Thus we have a unpredictable assortment of colourfully painted towns that radically differ from each other on climate, religion and life style. In each island or town, I would like to know how the decision to paint the houses came about. Was there a long history of colourful homes in those particular places or did the decision come about suddenly? Did the directors of tourism services suggest that lively, colourful towns would attract outside visitors more, especially in colder or duller climates? Does the town council in these places have the right to approve the colours selected by individual householders? 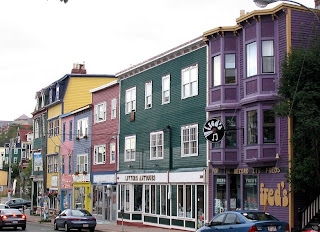 And does the size of the town or the island make any difference to decision-making? Tobermory on Mull only has a population of 500 people and although its association with the British Fisheries Society was once hugely successful locally, this Scottish town didn't have to consult many people before it made its decisions. The population of Burano might be 4,000 and Nuuk might have 14,000 citizens, but they are still very small. Yet St John's Newfoundland has almost 200,000 residents, so could not possibly paint every house and business brightly. What they have done, in this bigger city, is to restrict the bright colours to the Victorian and heritage buildings. This is very similar solution to the one chosen by San Francisco, an even larger city. 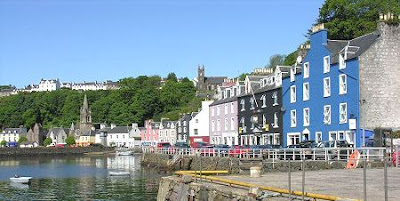 Occasionally historians can get glimpses of decision making. Sometimes the decision was made without much planning. It has been suggested that Italian migrants, who settled in La Boca in Buenos Aires from 1880 onwards, could not afford paint for their houses. So they used the left over paint that was used to protect the ships in the dock. Ookpik found more historical thinking in the choice of colours in Nuuk, Greenland i.e that modern Nuuk citizens wanted to keep the traditional feel of the town’s original Dutch settlers. 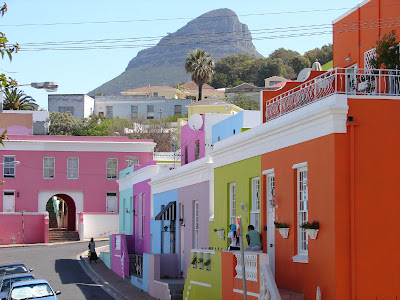 Travelblog Jodhpur reported that most buildings in Jodhpur are painted medium blue which makes this Indian city a stunning sight. The blue painting was originally only used by the Brahmin caste but soon others joined in; the colour was said to deflect the heat and keep mosquitoes away. 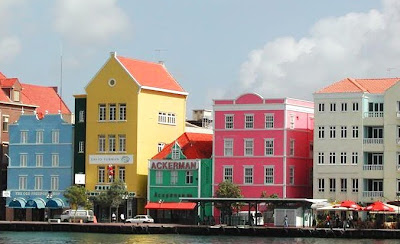 I can imagine that far from continuing a long and much loved tradition from the past, some cities wanted a clean break from their past. Touropia reported that the new mayor of Tirana in Albania launched a campaign to add colour to the city that he felt had been dull under the communists. In 2000, apartment blocks and public buildings were painted in intense pinks, greens and blues.

Interestingly, I could only find one individual who was responsible for changing the colour preferences of an entire town. Baron Rodolphe d'Erlanger’s own palace at Sidi Bou Said in northern Tunisia was completed straight after WW1. Not only did he love bright blue and white for his own architecture – he also asked the rest of the town to paint their homes similarly. 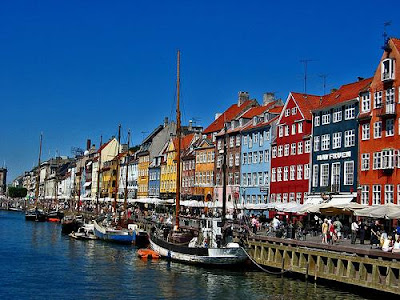 There are places in Devon and Cornwall just as colourfu, but in Ireland it has crept far inland. Never thought about why, but always loved the colours.

We were visiting our daughter in Poland and were very surprised to see bright facades in places like Gdansk, Wroclaw and the Old Town in Warsaw. You could not get further apart from the Caribbean, either in weather or religious values.

Hermes, I enjoyed the colours from the very first time as well, but now I am fascinated! Can you see an increasing trend, at least in Ireland?


Bill, there is a country I know nothing about - Poland. What does a brightly coloured city, or part of a city, look like in the snow?

In the soth of England there are many colourful country villages. I live on the Essex/Suffolk border and our village has 55 individual homes - cottages and large farmhouses. Most of them are thatched and of wattle and wooden construction so there is relatively little brickwork on display. We are all painted in pretty colours! Mostly yellows, pinks, blues, greens, but not overly vibrants,more pastel shades. When I first moved here, I felt like I had come to live in toy town!
I haven't a clue where all this colour comes from and found your article fascinating.

In answer to Juliana, Suffolk is like that, eg. Kersey

Hermes, bless your heart :) You have introduced another issue that I didn't know how to tackle in my original post.

I had had a close look at the Painted Ladies (late Victorian homes) of San Francsciso and decided not include a photo of them. They used gentle pastel colours and I wasn't sure if it was the same impulse that drove the strong colours in Burano and Curacao.

Your reference to Eyeries in County Cork has gorgeous, rich, bold colours. They could not be better (for my case). But Kersey in Suffolk has gentle, pastel, colour-washed houses. Lovely, but very different, I suspect.

Juliana, I am not sure which village on the Essex/Suffolk border you are discussing, but it sounds like an excellent resolution to a possible decorative problem. I can imagine the good council members sitting around saying "we want to beautify our town but none of that loud, uncouth, foreign muck here, thank you very much".

Burano is my favorite, though.

These are brilliant but even better when you see them side by side.

What a wonderful post. I have always been drawn to colorful places, it makes you happy and uplifted. I remember when I first got to see La Boca in Buenos Aires, knowing that they painted with leftover paint, you can think that it was some sort of blessing? This way they created a memorable place out of what they had and a bustling centre with dance and happenings, that somehow reached the world.

J Bar and Kristin,
When I saw coloured houses for the first time (Santorini, Mykinos and Burano in the first instance), I thought what fun. But I think you are both right in alluding to uplifting of the spirits.

Susan, thanks for the note.

I would say the same thing as I said to Bill. Russia, Finland and Sweden are large, cold countries, so I wonder what sort of impact the colours have in the snow.

Lovely blog, Hels. Love colourful places too. Have you looked at the Barrio area in Tucson. I believe they allowed repainting there in bright colours that reflected the intent of the original period rather than that exactly replicated the colours of the specific buildings. (Or somesuch - my memory is a bit vague but I do have a photo or two). (Signing in with my Google account, but I'm also WhisperingGums).

Glad to see my home town of Cork get a mention.

Sue,
I have been to Tucson, but it didn't even occur to me to examine its architecture. So thank you!

Just as you suggested, the Tucson Infonet Guide says the old adobe and brick houses date from the 1840s until the 1920s. Many neighbourhoods are now designated Historic Districts on the National Register. These districts come under the protection of historic zone ordinances, which, amongst other things, control exterior colours.

I will go back into the post and add a photo.

PM Doolan,
Isn't it fantastic when a blog article strikes a chord close to the heart? I love it.

Wow, that was quick. Nice to see it there. I did like Tucson. I also love Cork - but didn't see those colours when we were there.

I've often wondered about this - how and why some places are painted and others not. Here in Scotland there is dreary endless gre harling, which is mortally depressing, almost I think deliberately so, as if colour is sinful in some way. But there are some lovely exceptions - mostly on the coast, Tobermory being the star. Lovely piece! Thanks.

fictionwitch,
couldn't agree more! I was thinking of public respectability but you put it better - "mortally depressing, almost I think deliberately so, as if colour is sinful in some way".

The Melbourne Urbanist blog has written about why Melbourne architects do _not_ use colour more... why grey is the dominant colour. This is an interesting perspective on the colour question.

This quiet Paris street is a riot of colour with almost every house painted in vibrant green, yellow, purple or pink, whilst the plainer ones have contrasting colours for the doors and shutters set against white or cream backgrounds.

You mentioned Zacatecas in Mexico but not, I believe, the stunning city of Guanajuato.