At the age of 42 and after decades of struggle, Edward Elgar (1857 – 1934) created his Enigma Variations, which was premiered in London under a famous German conductor. He was an "overnight success"! But for casual listeners to music, Elgar is best known for the first of the five Pomp and Circumstance Marches, which were composed before and after World War One. To mark the coronation of King Edward VII, Elgar was commissioned to set the Coronation Ode to music - it was for a gala concert at the Royal Opera House in June 1901. Elgar incorporated a new vocal version into the Ode and, as even the least musical of us know, Land of Hope and Glory became unbelievably popular.

Elgar was invited to performances across Europe and America many times, and was feted wherever he went. Yet despite being knighted in 1904, Elgar really just wanted to be left alone to get on with his writing. How ironic that at the very time that Elgar was feeling depressed and uncertain, from 1900 to 1914, the public considered those years to be his golden, creative era.

When World War I broke out in 1914, Elgar was in his late 50s and way too old to jump out of trenches. In any case, I doubt that he would have found the idea of killing other young men even vaguely tolerable. Nonetheless he wanted to serve King and Country in some capacity, and his last musical project of the war years was setting of verses by Rudyard Kipling to music.

Classical Music Blog noted Elgar’s prestigious academic appointments, his many overseas trips and the increasing fees from his performances, but said that fame came at a cost. His new life as a celebrity often provoked ill-health from his high-strung nature and interrupted his privacy. Despite his large house in Hampstead, Elgar needed to escape from his exhausting personal schedule and the misery of post-war London.

And he needed to be out of the city.  In earlier part of his life, Elgar had found the peace and quiet of the countryside, its views, sounds and smells, to be inspiring. 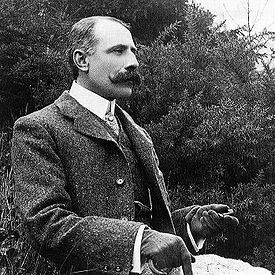 So moving to the country was definitely important for Elgar, if he was to recover his strength. But it is unclear who selected Brinkwells Cottage in Fittleworth as the place to recuperate. Elgar’s friend, novelist and critic Ford Madox Ford, lived next door in the wilds of West Sussex, with the Australian artist Stella Bowen. Before the war Ford had founded The English Review, in which he published all the finest Edwardian authors, including Thomas Hardy, Joseph Conrad, Henry James, HG Wells and William Butler Yeats. So it may well have been Ford who persuaded Elgar to move, by offering him sparkling, intellectual company.

I personally think it was Alice Elgar who said to her husband “Eddy darling, are you trying to kill yourself with overwork and depression? Let us go to somewhere quieter and greener, a place where noone will find you”. In either case Elgar fell in love with Brinkwells the first day he saw it and rented the secluded thatched cottage in its rustic woodland setting as a country retreat from 1917 to 1920. The cottage was owned by the landscape artist Rex Vicat Cole. 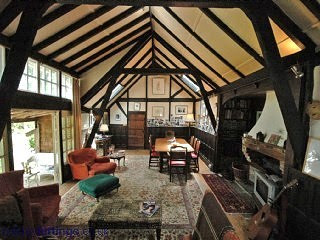 Elgar did indeed potter around the cottage and gardens, but he also achieved some quality writing. Immediately after the war, in 1918 and 1919, he produced four large-scale works: a violin sonata, a piano quintet, a string quartet and his famous cello concerto.

Part of the recuperation process was working less and relaxing more. The owners of the Swan Inn in Fittleworth pointed out that Sir Edward Elgar, arguably England’s greatest composer, enjoyed the hospitality of their little rural hotel on many occasions. It was only after his beloved wife’s death in 1920 that Elgar wanted to leave; he did so in August 1921.

Elgar died in Feb 1934 and was buried next to Alice in St Wulstan's Church in Little Malvern.

The agent for the cottage reminds visitors that in 1929, Elgar’s music studio was moved up the hill to its present location at Bedham, a small hamlet in an area of totally unspoilt beech woodland. In 1949, long after Elgar’s death, the studio was increased in size. 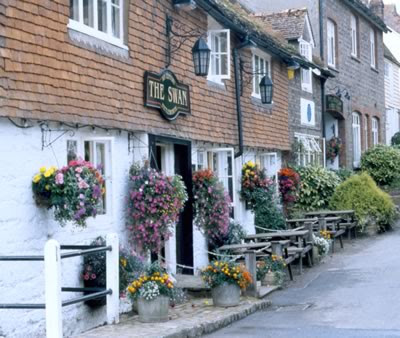 During his lifetime, Elgar lived in dozens of  residences. And this does not include the houses of close friends where he could stay at as a house guest, sometimes for months on end. People interested in examining Elgar's choices in homes, gardens and decorative arts would love The Elgar Trail. It suggests that Edward Elgar was a restless soul.
Two recent connections with Brinkwells that the reader might like to consider. Firstly the 1996 film, Elgar's Tenth Muse: the Life of an English Composer starring James Fox, was filmed on location at Fittleworth.
Secondly a book by Carol Fitzgerald and Brian W Harvey called Elgar, Vicat Cole and the Ghosts of Brinkwells, was published by Phillimore in 2007. The authors show that Elgar rented the cottage from the artist Rex Vicat Cole who had enlisted during WW1. Elgar used the artist's studio as a music room and composed surrounded by his canvases and drawings.
The authors suggest that by looking closely at the profound influence of a time, place, and key people during a chapter of a composer’s life, one will gain a better understanding of his music from that period. Elgar certainly respected Rex Vicat Cole's work and the two men were united in their deep love and understanding of the woods that surrounded the cottage. The enchantment of Brinkwells was as evident in Cole's paintings as it was in Elgar's music. 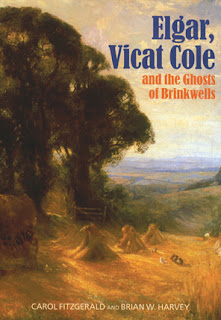 Wonderful and educational post. What an enduring studio. Have a lovely night!

We rarely think about how great artists suffered from depression and overwork. And how rural architecture and gardens might have restored their energy and creativity.

I think that any place named Fittleworth would be a great tonic!

My father tells the story of how he and his best friend used to whistle Land of Hope and Glory outside each other's windows as a signal to come outside. (Somewhat less noble than its intended purpose, but there you go.)

The UK has truly wonderful place names eg the Piddle Brook runs in Worcestershire with two wonderful villages on its banks: North Piddle and Wyre Piddle. And I hope I never have to write to Great Cockup in the Lake District :)

I think the thing about Land of Hope and Glory is that there are very few people on this entire globe who cannot hum the tune. Imagine being so influential that your words or tunes were known to all 6 billion of us humans. Even Shakespeare couldn't claim that!

I personally prefer The Dream of Gerontius though it, like Elgar was regarded with suspicion at the time. He never became part of the Establishment,largely being self-taught, and influenced by European music.

Hermes what I know about music could be written on the back of a postage stamp! In crayon!! But I do know about class consciousness.

I wonder if Elgar's ordinary background influenced his depressive episodes. His own family seemed not hugely achieving but they were decent enough. His Catholicism DID take him out of the mainstream yet his wife, who was very educated, accomplished and well published, loved and supported him anyhow.

Perhaps he was just hyper sensitive, even after he was feted all over Europe for his successes.

Elgar felt himself to be an outsider all his life. His Catholicism set him apart from the establishment, and his family was lower middle class. He craved the approval of the establishment and the society of the upper classes - and to a certain extent he won the friendship of upper-class people (through his wife, partly) - but, a hyper-sensitive soul indeed, he never felt he was truly accepted by the social set he wanted to be in, and so went around with several chips on his shoulder. His music was appreciated first in mainland Europe - especially the orchestral works like the Enigma Variations and the two symphonies - and when he did become famous in Britain he felt it was partly for the wrong reasons: I think I've read that he disliked the jingoistic ways in which 'Land of Hope and Glory' was used. Brinkwells must have been a wonderful sanctuary for him, and the music he wrote there is terrific, but after Alice died he retreated into his shell and he wrote very little: sad.

Philip, I agree with that.

But until Elgar got to Brinkwells Cottage, he never really settled anywhere. Most people move twice or perhaps 3 times in adulthood. Not 25 times (I am not counting Elgar's work related, non-permanent moves).

Even his attempts to _buy_ Brinkwells Cottage fell through, although he only left Sussex it must be admitted because his beloved wife died.

Oh, by the way: one of my favourites among Elgar's short pieces is Sospiri, for string orchestra, organ, and harp. It's very slow and sad (the title means 'sighs') and was first performed on 15 August 1914. It was written just before the outbreak of World War I, so can't be taken as the composer's direct response to the war, but coming when it did it's a reminder that Elgar was not the simple triumphalist-imperialist that he's sometimes still made out to have been.

if Elgar was a hyper-sensitive soul who always felt like an outsider, no wonder he was often depressed. Did you know that in 1879 the young Elgar took up a post as bandmaster in a mental asylum, where he worked for 5 years? I did not!