Pulitzer: A Life in Politics, Print and Power by James McGrath Morris (published by Harper in 2010) is a very interesting book, especially for those of us not familiar with C19th American history. The Pulitzer Prize is known by everyone who can read a book, but I doubt if people know where he was born, raised and educated, and what his career was in the USA. 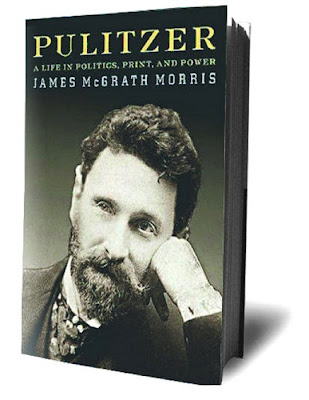 Joseph Pulitzer was born and raised in a town just c200 ks southeast of Budapest. The Pulitzers were among several Jewish families living in the area, and had established a reputation as merchants and shop keepers. Joseph's father was a respected businessman who seemed to be doing well in a small town, but apparently he wanted his children to be properly educated in the big smoke. In 1853, therefore, the entire family moved to Budapest. Within a few years, the father died and the family was left without financial support.

James Morris didn’t seem to be surprised when young Joseph signed on to serve in the US Army during the height of the American Civil War, but I was. The losses on the Union side must have been so great that recruiters scoured Europe for fresh soldier-material. And they were successful; Pulitzer was shipped to the USA in 1864 where he served in an all German-speaking cavalry unit. He didn’t know a word of English but he did speak German, Hungarian and Czech perfectly.

After the war and without a penny to bless himself with, he decided to travel to St Louis Mo where he loved the German-speaking community. The local Westliche Post, published in German, offered jobs, accommodation and everything else a young man new to town could need. He even worked in a restaurant that was a favourite spot for the St Louis Philosophical Society. And he spent his free time in St Louis’ Mercantile Library, studying written English. The Westliche Post, in the meantime, agreed to publish some of his stories.

Two of the Post’s owners helped Pulitzer secure another job, this time with the Atlantic and Pacific Railroad. Pulitzer's job was to record the railroad charter in the court houses of the 12 counties it would pass through. When he was done, the lawyers gave him an office and access to their library where Pulitzer studied law. In 1867 he gave up his citizenship within the Austro-Hungarian Empire and became an American citizen. In 1868, he was admitted to the bar, but his German-dominated English did not endear him to potential clients. Nor did his short temper. It wasn't until 1868, when the Westliche Post needed a reporter, that he was offered the job.

Pulitzer had a talent for reporting, and was prepared to work hard at it. He joined the Philosophical Society and he frequented a German bookstore where many intellectuals hung out. There were horrible anti-Semitic descriptions of Pulitzer in opposition newspapers, yet “Jewseph Pulitzer, the freak with a huge nose” shrugged them off. [As you can see from the photos, Pulitzer was actually a handsome enough man].

As the most significant step in the Americanisation of Joseph Pulitzer, he joined the Republican Party. In Dec 1869, Pulitzer attended the Republican meeting at the St Louis Turnhalle where party leaders needed a candidate to fill a vacancy in the state legislature. They settled on the under-age Pulitzer. He won! I don’t suppose he wanted to stay in the state legislature for more than one term, but he achieved his short term goal - to move up to managing editor at the Westliche Post. 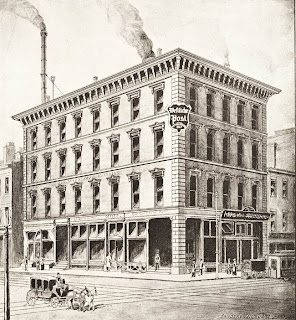 Westliche Post, a German-language paper that operated in St. Louis from 1857 to 1938.

I am not certain why Pulitzer moved to New York, but one of his first moves was to buy up a failing New York paper called The New York World in 1883. Now his own experience as an impoverished immigrant came to the fore; his editorials supported causes that promoted immigrants’ services and soon circulation soared. He married, had a cluster of children and could have been living the Good Life. But he did not enjoy good health nor did he have wonderful relationships with his wife and surviving children. Even his only surviving sibling, who also emigrated to the USA, found him a demanding brother.

Two important events raised his new paper in circulation and popularity. Firstly Pulitzer shifted the newspaper's focus away from hard news and more towards human-interest stories, sensationalism and scandalous tales. Then in 1895 The New York World introduced the famous The Yellow Kid comic, the first newspaper comic printed with colour. So I am not remotely surprised that under Pulitzer's leadership, the circulation of the New York World grew from 15,000 to 600,000, making it the largest newspaper in the country.

This remarkable growth in circulation was despite the fact that Charles A Dana, editor of the rival New York Sun, attacked Pulitzer in print, using bitter anti-Semitic vitriol. And Theodore Roosevelt was equally unimpressed with Pulitzer. After the World exposed an illegal payment of $40 million by the USA to the French Panama Canal Company in 1909, Pulitzer was indicted for libelling Theodore Roosevelt and JP Morgan. Roosevelt failed, but the case could not have improved Pulitzer’s poor health.

Back in the 1890s, Pulitzer had offered Columbia University enough money to establish the world's first school of journalism. The university initially turned down the money, presumably because of Pulitzer's difficult nature. In 1902, Columbia's new president was more receptive to the plan for a school and prizes, but Pulitzer's death in 1911 intervened. Pulitzer left the university $2 million in his will, which led to the creation in 1912 of the Columbia University Graduate School of Journalism. In 1917, six years after Pulitzer’s death, the first Pulitzer Prizes were given out.

Under the care of Pulitzer’s sons, The New York World continued as a newspaper until 1931. 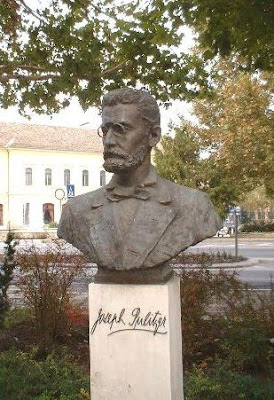 A bust of Joseph Pulitzer in the centre of his old Hungarian town.

As a non-American, I can see how ironic it is that Columbia's Graduate School of Journalism remains one of the most prestigious in the western hemisphere. If the “Jewseph Pulitzer, the freak with a huge nose” is looking down from heaven today, he would be having a good laugh at the anti-Semitic Charles A Dana and his ilk.

But I cannot estimate the significance of Pulitzer's contribution to American journalism. So I will quote Adam Kirsch instead. "We are now witnessing the death of the whole style of newspaper publishing Pulitzer invented. The big city daily, the kind of newspaper that everyone read because everyone had to read it—from politicians and businessmen to laborers and homemakers—is a thing of the past. So are the profits that such papers used to bring in. Pulitzer’s paper made him the 19th-century equivalent of a billionaire."
Posted by Hels at 27.8.10

I think Pulitzer's huge contribution to freedom of the press and fair reporting needs to be emphasized, even if he liked scandals as well. Cartage.org says Pulitzer was responsible to a large extent for passage of antitrust legislation and regulation of the insurance industry. Even when attacked by the entire Federal government and the court system, Pulitzer refused to retreat and The New York World continued its investigation.

Morris would agree 100%, Mott. The legal battles that Pulitzer had to put up with were for his own journalistic integrity and stubborn focus, but the outcome was a new freedom of the press that altered American newspapers and politics for ever.

Irony, indeed - so attacked then, his prizes so coveted now.

ChrisJ, I am bowled over by the list of prize winners in the years since 1917!

At first there were only 2 Pulitzer Prizes for journalism and 2 for literature each year. But I don't know what was in Pulitzer's bequest, regarding the Prizes. So it would make an interesting blog article (by a person interested in writing *hint* *hint*) to investigate how the number of annual prize winners expanded and who were the successful winners.

James said...
Dear Ms Webberley,
Thank you for your very kind write up of my book. I am touched by the immense effort you made to share it with your readers.
Best wishes,
James McGrath Morris

I love to read well-written biographies of famous newspaper men, and this book sounds wonderfully interesting.

I hope that good newspapers will continue to have wide circulations in spite of the Internet. If not, the freedom of the press for which Pulitzer fought so hard will be in grave danger. Unfortunately, some people are suggesting that governments intervene to protect newspapers! Pulitzer would turn over in his grave at the very thought!

Viola, thanks for raising that.

Morris' research suggests that Pulitzer was always a modern thinker, perhaps even ahead of his own time. He may well have gone along with the most modern of technology, being just as concerned with freedom of the press and quality journalism in web-based news as he was over paper-based newspapers.

Man I’m impressed with this informative blog, and in fact you have a genius mind. keep up the good work.work from home

It's my first time to get a glimpse of Who really is Joseph Pulitzer. I admire the man and his great contribution to humanity.

Keep up the good work...GbU!

One of my favourite patrons of Gustav Klimt in Vienna was Serena Pulitzer, wife of the industrialist August Lederer. It seems that one of Serena's rooms was totally dedicated to her amazing Klimt collection.

Was Joseph Pulitzer her nephew? Cousin?

Behind every great genius is a great rival, an unstoppable adversary with incredible vision, determination and ambition. In this stunning 8 part series (4th Jan-22nd Feb 2017), we hear the stories of how the ultimate rivals for posterity clashed.

The newspaper redefined the way America tells its stories, but its rise to prominence was born out of a bitter rivalry between a man who built himself up from nothing and the wealthy son of a business tycoon. Follow William Hearst and Joseph Pulitzer as they push the limits of journalism in unthinkable ways, forever changing the media landscape. Flashy headlines and sensationalised stories are born out of the war for circulation. But when the newsies strike, the media giants’ papers come to a halt and the men must learn to compromise in order to keep their empires afloat.