Demetre Chiparus (1886-1947) was born in Romania. Perhaps as a young man he didn’t see a future for himself in Romania so he took himself off to Italy in 1909 to learn with an Italian sculptor. Three years later he was off again, this time to Paris to attend the prestigious Ecole des Beaux Arts. 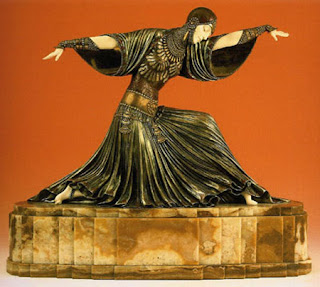 While still only in his 20s, Chiparus started having his name noticed. Undoubtedly the viewers would have been attracted to the exquisite flesh tones, alongside the muted but rich metallics. I would love to have seen these early work in bronze and ivory, the sculptures that Chiparus exhibited at the Paris Salon of 1914, but my books don't have any on display.

The first works of Chiparus that I have seen with my own eyes were made in the 1920s. Like in all Art Deco art forms, the influences came from a number of sources, including Serge Diaghilev's Ballets Russes which opened in Paris just before WW1 started. A second influence arrived in France after Pharaoh Tutankhamen's tomb was explored in 1922 by the British Egyptologist Howard Carter - the art of ancient Egypt. Chiparus was never in Egypt and wasn’t bothered by historical accuracy, so he felt free to imagine what Queen Cleopatra and her Egyptian dancers might have looked like. 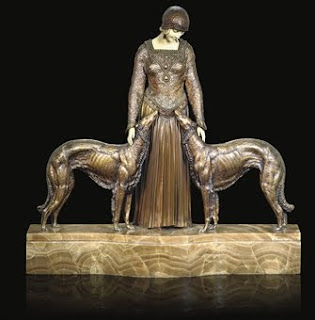 Canterbury Antiques noted that another great influence was the French theatre, opera and films (eg Thais, from the opera) where he saw women with long, slender, stylised shapes. His women were idealised of course, but idealised according to a 1920s model: slim, very athletic, dressed in oriental costumes, involved in running, dancing or dog handling. Did Chiparus use the photos of dancers, taken from fashion magazines of his time? Chiparus watchers seemed to think so. Apparently the faces on some sculptures closely resembled known Russian personalities eg Nijinsky and Ring Dancer c1928 may have been modelled on the Folies Bergere dancer Zoula de Boncza.

In short, Chiparus’ women were no shrinking violets with books in their hands; rather his sculptures were definitely bright, energetic and decorative. Whether you have ever heard of Chiparus before, or not, his works combined the elegance and luxury that still sum up the spirit of the Art Deco for us. 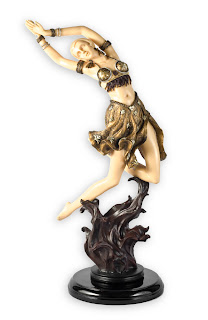 Chryselephantine was the process Chiparus used, a process that involved an amalgam of bronze and ivory that was carved into a sculpture, then gilded. While the ivory on most figures in this process was normally tinted, the bronze was either patinated using acids, metallic oxides and applied heat, or cold-painted and lacquered.

This technique was apparently popular with many Art Deco sculptors with studios in Paris and Berlin in the 1920s, focusing on the same stylish young women with elongated limbs. Of the other artists using this technique, the only name that was familiar to me was the German sculptor Ferdinand Preiss (1882-1943) whose dates coincide closely with Chiparus’ dates.

Chiparus' work was fired by the Edmond Etling and Cie Foundry in Paris, under the directorship of Julien Dreyfus, and by the Les Neveux de J. Lehmann foundry. But both these foundaries were Jewish businesses that came to grief once the Nazis took over. Chiparus was not himself Jewish, but I haven’t seen any more of his works after that period. He died soon after the war in 1947 and was buried in Bagneux cemetery near Paris.

The most comprehensive collection of exquisite Chiparus sculpture is shown in Blog of an Art Admirer and History Lover and in JessicaNessica's Gallery. 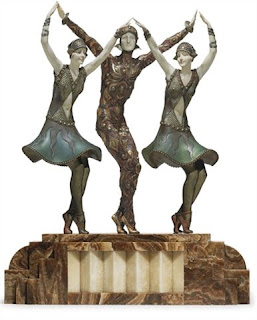 In case readers are interested in today's values, a 1999 Antique Road Show appraisal of a large Chiparus sculpture called Starfish was given as USA $100,000 to $150,000.  People were stunned and amazed! But then, at the Sotheby's Chiparus auction of April 2010, the highest priced object went for USA $936,000. The version of Les Girls sold at the 2010 auction was the only sculpture by Chiparus to feature five figures on a single base.

Chiparus experts offer a warning - 95% of so-called Chiparus works on sale these days are fakes.

For all art and old print lovers,
Whether it is for decorating your interior, for a gift or simply for your own delight, you might want to check these few images by visiting our site at Meyer Antique Prints. Thank You!

Disclaimer: If we have offended you by sending this to you by mistake, we apologize. Please reply 'NO' or 'Unsubscribe' to this email if not interested, so that we shall add you to our 'Do Not Contact Again' list.

I saw some of his work a few years ago (hope it was genuine), wonderful style and fluidity.

Thank you all. Because I haven't seen his 1914 works, it is almost impossible to guess what they looked like.

If they looked like his 1925-8 high Deco pieces, we might well suggest that Deco taste did NOT start in 1925 at the Paris Expo.

If they looked very different, we have to ask what inspired Chiparus to move in the direction he eventually chose?

At the Sotheby's Chiparus auction in April 2010, the highest price went for USA $936,000. The version of Les Girls that they sold was the only sculpture by Chiparus to feature five figures on a single base.

The role of the artist I now understood as that of revealing through the world-surfaces the implicit forms of the soul, and the great agent to assist the artist was the myth.

Implicit form of whose soul - the artist's or the model's? With Chiparus art, I am guessing the model's.

I am a contributing editor with Antique Trader working on a story on Chiparus. I came across your wonderful blog and would love to get some of your thoughts on Chiparus for the piece.

Can we set up a time to phone or Skype or, if it's easier (I'm in the US) I can just send you some questions by email.

Thanks so much for your time.
Best,
Zac


Zac
email me by all means. If I cannot help you, I will refer you to my favourite text on the subject: Chiparus: Master of Art Deco by Alberto Shayo, published by Abbeville Press in 1999.

Bruno Zach must have been well impressed by Chiparus!

when you examine the two men's careers in Deco sculpture, comparisons are inevitable. Both depicted vigorous, athletic or balletic women, and both loved using ivory and bronze in their pieces. Both were born near 1890 and both came from Eastern Europe and moved west.

But I wonder if they ever met.