At My Soiree published a very dramatic photo of a fire in Kelowna, British Columbia that burned some 200 homes in 2003. Like all Australians in the south east corner of this continent, I often think about the yearly nightmare of bush fires, even if I don't normally associate Canada with searing heat and dry, destructive winds. Weeks later, Chris' photo is still hauntingly scary.

In Australian Bushfires in Art I, I suggested that the biggest, oldest and most important image of bushfires in Australian art was by John Longstaff. His painting, called Gippsland, Sunday night, 20th Feb 1898 was indeed large (145 x 199 cms) but I should have examined an earlier painting first. 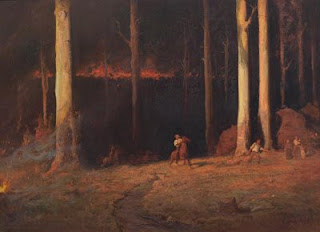 William Strutt was a British Royal Academy trained artist who moved to Australia and lived in Victoria from 1850 to 1862. He was in Melbourne just in time for the appalling bushfires that swept across the Victorian colony in Feb 1851. The fire was so far reaching that its glow could be seen across the state, even threatening Melbourne. In fact the north wind was so fierce that the thick smoke reached northern Tasmania, turning day into night. The temperature in Melbourne rose to 47 degrees centigrade at 11 am and Melbourne Town was in grave danger of destruction by encircling bush fire. 12 humans, 1,000,000 sheep and thousands of cattle were lost.

Strutt never forgot his first experience of a blazing hot, dry Australian summer and made many contemporaneous sketches. Later on he used those sketches to compose the final painting.

After spending some time on the gold fields of Ballarat, Strutt returned to Melbourne in mid-1853 and became actively involved in the city’s cultural life, accepting some significant portrait commissions and joining the Victorian Society of Fine Arts.

Strutt returned to England in 1862 where he continued to work on his sketches, producing at least three major oil paintings that reflected his Australian experiences. None was as significant as Black Thursday, 6th February 1851, now one of Australia's most important colonial paintings. It was completed in 1864, measuring a huge size (107 x 343 cm). This complex work showed groups of terrified people and animals fleeing the dense smoke of the advancing fire. In the foreground was an intentional pile of dead animals, skulls and bones! The Age Newspaper wrote in September 1864: 'The proper destination of this really historical picture is the colony itself, where it should be preserved in any public collection as a memorial of a terrible incident in colonial annals”.

Strutt died in Sussex in 1915. Many decades after the painting was completed, it finally did leave Britain and was shipped to the La Trobe Picture Collection in Melbourne.

Which is the finer painting, Strutt or Longstaff? The Strutt image was so crowded with terrorised people and animals, it became a fixed tableau across the wide canvas. It seemed like the artist used the particularly Australian experience of a bushfire to produce an epic European history-drama. Strutt's painting was set in a sandy desert with no fuel for a bushfire to consume. 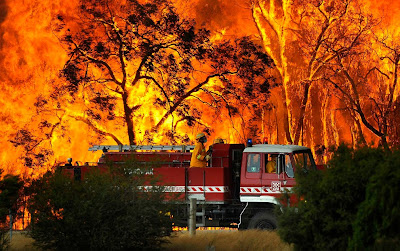 In January 2005, the Eyre Peninsula was the scene of a devastating bushfire in which nine people were killed and another 120 hospitalised. The death toll might have been higher, had it not been for the orders to residents to leave their homes and head to the beaches to the east. Even so, it was one of Australia’s worst bushfires since the Ash Wednesday fires of 1983.

Hard for us in the UK to imagine what a horror such fires must be - but these paintings, convey both emotion and information.

You have put the modern fires in historical context. But I wonder are the fires becoming bigger and more frequent?

Even if Russia, Canada and other previously cool countries now become hotter and hotter each summer, they don't have the history of bush fires that Australia has. Our 19th century artists, farmers and fire fighters may have a lot to teach the world.

Thank you everyone. Fires, floods, earthquakes, hurricanes are terrifying enough for us moderns. I have personally only experienced 47c in Melbourne once in my life, on Black Saturday 2009, and it felt life threatening.

I wonder what William Strutt thought, when he arrived from Britain in 1850. Probably people had warned him about the vast distances within Australia, the hot summers and the jellyfish. But imagine the terror of an entire state burning out of control.

If Strutt had a sense of the romantic already, he must have assumed God and Nature were wreaking some sort of vengeance on Australia.

The Strutt painting has more terror in it and more than a touch of the abject.

The photo is just plain terrifying.

Central BC has always had a brisk forest fire season, but it does seem to be much worse in the last ten years.

Thank you for the link.

I've always admired Longstaff's painting - there is an understated terror in the dark tones and the theatrically lit figure and trees and foreground. The distant flames are hair-raising for anyone who has personal experience of a bushfire.

oh, not need to talk about fire
a terrible disaster, but like other "gifts of nature"
True, fires tend to occur due to human negligence