Could Violet Gibson have saved Italy from Fascism? Violet who?

Frances Stonor Saunders wrote The Woman Who Shot Mussolini, published by Metropolitan Books earlier this year: 2010. I don’t pretend to be a modern history scholar, but I did think I would have heard of a major event like the attempted assassination of one of the 20th century’s great dictators in 1926. By a woman, no less! 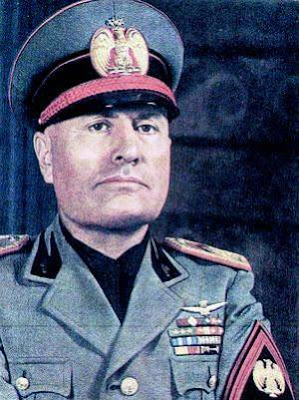 Prime Minister of Italy, Benito Mussolini
*
Violet Gibson (1876–1956) was the daughter of British aristocracy. In fact her father, 1st Baron Ashbourne, was actually Lord Chancellor of Ireland. Raised in the Protestant staunchness of late C19th Ireland, young Violet did not make her parents happy. She was always a bit weird religiously, trying out mysticism and theosophy before ending up in the bosom of the Catholic Church. And her older brother Willie was seen as even more treacherous. The heir to his father's title, Willie became a Catholic and a supporter of Irish Home Rule, and was promptly disinherited by the family.

Apart from upholding what was seen as an extreme religious position, Violet had two other “strikes” against her. She had dabbled with the peace movement and she had a very worrying psychiatric history. Socially isolated from her family and anyone else who might have seen the warning signs, there were certainly a number of suicide attempts and probably as many fearsome assaults on other people.

Benito Mussolini (1883-1945) started his political career with dignity, but he was on his way to becoming a rather nasty dictator by the inter-war period. Did Violet see the future and decide to save Italy and the world from a Fascist dictatorship in Italy? If so, in 1926 she was well out of step with Winston Churchill and other senior decision-makers back in Britain. Centre of Criminology Library Blog stated that Italy's prime minister was one of that country's great 1920s tourist attractions! The King of England even decorated Mussolini with the Order of the Bath!

In April 1926 Mussolini was in a car after leaving an assembly of the International Congress of Surgeons, to whom he had delivered a warm speech about modern medicine. Violet Gibson, who loved Italy and was there staying for a while in a convent, approached Mussolini closely and shot at him several times with a pistol. She hit him at least twice but Mussolini’s wounds were not serious and after he was bandaged up, he continued on his parade duties. Gibson’s life was more in danger than her target’s – she was only saved from an angry mob by Italian police. 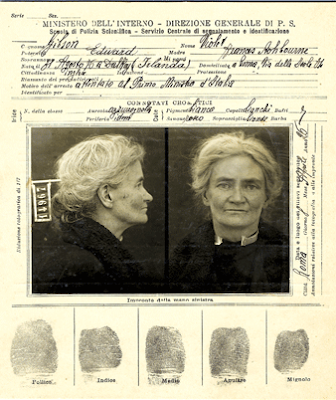 Why did a middle aged Anglo-Irish aristocrat try to assassinate Mussolini? Either she was a lunatic, answering to private voices in her head about saving the true Catholic Church. Or she was part of a larger crusade to save Italy from descending the same fascist path as Spain and Germany.

Decades later, Peter Popham reported that Gibson travelled to Rome with the original intention of murdering the Pope, but then changed her plan. Blog de study508 agreed, since Violet told her brother Willie that Pope Pius XI had betrayed the Church and should be killed. If both these blogs were correct, it suggests that Gibson was extremely angry, but that her anger was at best unfocused and unplanned.
*
Clearly the Italian authorities in 1926 must have believed she worked alone, since Gibson was quickly deported back to Britain after being released without charge. She spent the rest of her life in an expensive mental asylum, St Andrew's Hospital in Northampton, in her birth town. The irony was that she wanted to live out her life in a Catholic convent. In 1956 she was finally buried in Kingsthorpe Cemetery, Northampton, aged 80 years.

Saunders does not give a definitive conclusion. The mix of spiritualism, mysticism and Catholicism seemed to have been a potent and combustible mixture for Violet. She had discovered a religious vocation that required her to make a sacrifice of her own life, in her stand against ,,, what? Fascism? Yet the large question still hovers over Gibson’s attempt on Mussolini’s life. Had she made the attempt in 1940 when Italy declared war on Britain and France, she might not have been declared insane. Instead Gibson might have been given a seat in Parliament, with the grateful thanks of the nation. 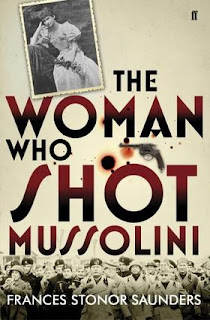 Since reviewing Saunders book, I found A Blog About History's article on the secret diaries of Benito Mussolini. Mussolini apparently hid a set of secret diaries in an Italian hillside and ordered them not to be opened until 2025. The documents may or may not be secret diaries and Mussolini may or may not have written about Violet Gibson. But one point was fascinating. The blog noted a theory among some Italian historians - that Mussolini was executed as part of an MI6 plot to spare Britain embarrassment about the  closeness between Benito Mussolini and Winston Churchill.
Posted by Hels at 26.6.10

I had no idea - great post.
Pity she failed though.

"closeness between Mussolini and Churchill"- never heard of that!!

tomas, as far as you can tell from newspaper articles at the time, Churchill seemed to be very supportive of Mussolini until the late 1930s. Apart from any other consideration, they were both committed to anti-communism as their top priority.

Once Italy joined Germany in an alliance against Britain and France, all that of course changed.

Now whether Benito Mussolini was not killed by Italian partisans but by two secret agents acting on orders from Winston Churchill is still very much open to speculation.

Hels, very interesting I had no idea. I look forward to reading the book.

How did your article on the Liberty Memorial Museum come out?

Wow, I've never heard of Violet Gibson before (and other readers are apparently surprised, as well). Isn't it interesting how some historical details (as recent as the 20th century!) involving women have yet to become well-known. I'm interested in looking at this book by Saunders. Thanks for the recommendation.

Thank you everyone. I too had never heard of Gibson's assassination attempt and found the entire story bizarre. But we need to be aware of the dates.

By 1940, when Italy declared war on Britain and France, the entire world had changed. Only 14 years, but what an extraordinary era it was.

The Liberty Memorial Museum came up during the lectures on WW1 paintings, shrines and sculpture. I had literally thousands of examples in France, Belgium, Britain, Australia, Canada, New Zealand, South Africa, India, Israel etc. In every city suburb and every country town.

So I was delighted to find two wonderful examples in the USA - especially Kansas City. The students loved it.

When I first read the name, Violet Gibson on your blog, I thought that she might have been related to the Gibson sisters! lol

What a strange woman. I'd never heard of her before, either. I agree with Hermes that it was a pity that she didn't succeed!

Hermes and Viola, apart from the small moral problem of shooting prime ministers we don't like, would Mussolini's demise in 1926 have saved Iraly from Fascism, an alliance with Germany and the tragedy of WW2?

A fascinating question. The CIA never seem to have hesitated and the answer depends on how important an individual is in history - something I'm not personally decided on.

Hels, you might be interested in this. Marguerite Yourcenar is well remembered for her classic "Hadrian's Memoires"(one of my all time favourite works of literature) but way back in 1934 she already published a wonderful novel called One Coin in Nine Hands (I think that is the title). The novel is set in Rome in 1926 and Violet Gibson's attempted assassiantion forms an important part of the novel.

What a fantastic story. Never heard anything about this before. WOW!

Kristin, I don't think there was censorship of the event, but I don't think British politicians were keen to discuss the Gibson issue widely either.

Mr Doolan, you are a champion! Thanks

Hels, I do have a shot on my blog of Hyde Park Barracks in the daytime. If you do a search you can see it. :)

I tried to leave a comment on your Mussolini post that included a link to an interesting version of the Tarot card "Hanged Man." Apparently the favorite choice of your average Italian mob is to display its victims hanging upside
down in a public place. I wondered if this was the origin for said Tarot card?

Thanks for visiting PoliticoGoGo, and best wishes!
Russell