Che Guevara and the suffering Christ

Ernesto "Che" Guevara 1928 – 1967 was the revolutionary hero of my generation. Born and educated in Argentina, this physician, author, military leader and diplomat became the major intellectual of the Cuban Revolution. And after the Cuban Revolution in 1958-9, Guevara played a number of critical roles in the new government of Fidel Castro. 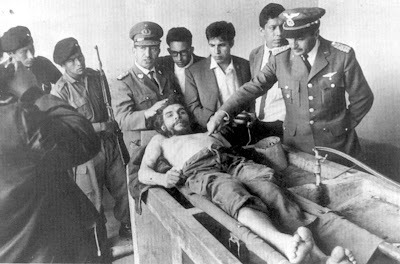 It was inevitable that right wing leaders throughout South America would seek Guevara wherever he went, presumably to kill him once and for all. The end came when Guevara's plan for fomenting revolution in Bolivia failed in 1967. A Cuban exile, working as a CIA Special Activities Division operative, advised Bolivian troops during the hunt for Guevara in October of that year. Bolivian President René Barrientos immediately ordered that Guevara be executed, but that his orders had to be denied.

It is probable that Che would have been compared to Christ being taken down from the cross in any case. He was in his 30s when he died, he had long hair and a beard, and he gave his life for the cause of the working class and the peasants in a deeply Catholic country. And probably his image would only grown in its inspiration – that change would arrive in Bolivia and that the poor could eventually live in dignity.


But a  photograph emerged that seemed to me to be a powerful visual and artistic reminder of Che’s redemptive powers.  After his execution, Guevara's body was lashed to the landing skids of a helicopter and flown to nearby Vallegrande, where photographs were taken of him lying on a concrete slab in a dismal laundry room. As hundreds of weeping locals filed past the body, many of these deeply Catholic people believed that Guevara's corpse was Christ-like in its hideous suffering. Freddie Alborta was the photographer who immortalised this last scene.

I am not sure how Alborta’s post-mortem photograph of Che Guevara was released, but English art critic John Berger observed that it resembled two famous paintings: Rembrandt's very large work, The Anatomy Lesson of Dr. Nicolaes Tulp 1632 and Andrea Mantegna's smaller Lamentation over the Dead Christ 1490. Berger had published many humanist essays and reviews in the New Statesman, and his strongly stated opinions on modern art made him a controversial and somewhat political figure. An early collection of essays, Permanent Red, made a clear statement of his own political commitments. 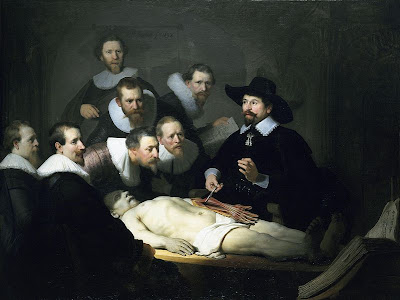 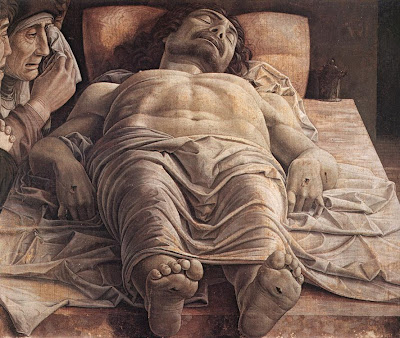 The powerful Catholic Church did little to condemn the greed of the ruling class in South America; instead of promoting social change and justice, it opted for the good order of the status quo. So it is doubly confusing for a humanist left wing art critic to be citing classical paintings in relation to a Marxist revolutionary from South America. However I think he was correct.

John Hess was also interested in the representation of Che Guevara as Christ, particularly following the publication of the post mortem photo in 1967. He quoted an Argentinian film maker who interviewed Freddy Alborta decades later and drew out the circumstances of the photograph. What were Alborta’s feelings and impressions? Did he know of John Berger’s interpretations of Alborta’s own photo?

Alborta did not, but he was very aware that this was not simple photo journalism. The photographer said he worked very carefully, knowing that he was in the presence of an already legendary figure, a Christ figure even, and that such a moment comes once in a life time.


You may like to read: John Berger "Che Guevara: the moral factor", in The Urban Review, Volume 8, Number 3, September, 1975

I've always been of the opinion that while he wasn't exactly betrayed by Castro, he was severely let down and left to die. He made the classic mistake of assuming everyone was on the same page as him and was unfortunately too arrogant to enter into communication with anyone.

I must read more about him actually. I read a rather one-sided biography which lauded his greatedness and many achievements, his compassion and his vision but I think I'd like to read something a little more balanced that would portray his more ruthless and reckless side. Any suggestions?

He was iconic to my generation, but perhaps for his image and poster rather than for his real life - in which I think its fair to say he wasn't actully that effective.

I don't suppose it matters whether Che was hugely effective or not, since he was all about left wing ideology and heart melting rhetoic, rather than political success.

I would say the same thing about Eva Peron from the right wing - adored by her shirtless followers and raised to sainthood before she even died.

I am still very interested in the making, or remaking of Che Guevara into a Christ-like figure, who was passionately adored by the ordinary people and who gave his life through terrible suffering.

I can imagine other nations having heroes, even political heroes (eg Churchill), but not depicting them in death as if they had been crucified for our sins.

Perhaps you have to have several hundreds of years of Catholic propoganda first. Over here we have Robin Hood instead! I remembered seeing this site:

when I was reseaching Acharya S.
books at a younger age. Goodness knows the people Che tried to help (for whatever motives) needed it - and still do. I think Emm makes several good points.

The 2004 movie The Motorcycle Diaries, based on Che's book by the same name, shows his early fifties trip by motorcycle around South America with his friend Alberto Granado. The movie shows him becoming polticized and why.

Both the book and the movie are very interesting.

our names and concrete events are the building material of the fine arts, but all these details just disappear ultimately at the transformation of the artwork to symbol. That may look confusing, but the above is a key to art magic. The opposite views cease to irritate us at a moment we succeed to breakthrough the surface of the picture. Then we just forget the outward shape of the things that caught us and start listen to our own heart and enjoy the spiritual message that comes as if out of inside but not the canvas we were looking at. Such way while knowing nothing about Che Guevara and his surroundings,I am feeling myself not as a stranger , but as if the viewer of my personal diary.

Great idea comparing the photo with the paintings. Sometimes art history is influencing photographers and they even don't notice. But they are also quoting famous paintings.

Great post and there is certainly something Christ like about Che Guevara. I think the great irony is how Che, the communist revolutionary, has become a commodity that is manafactured, distributed and sold by capitalists. All those copies of The Motorcycle Diaries, the movie, all those tee-shirts, posters, pins, caps, etc that bear his likeness - it isn't a communist party that is profiting from them. Teenagers today, just like teenages in the 1970s, still wear Che tee-shirts in order to claim a lifestyle that imples rebellion and individualism but in fact their actions perpetuate the system that they think they wish to condemn. No doubt most of the Che tee-shirts are manafactured by indentured laborors in South Asia. It reminds me of when I brought student to both sides of the Berlin Wall in 1989. In the east there were no souveniers, but at the westren side of the wall you could buy lots - and what were the capitalists selling? Pictures of Winston Churchill or J.F.K? No, they were selling the much sexier stuff - posters and tee-shirts with Che, badges with Lenin, pamphlets by Marx, Russian hats and army uniforms, red flags, etc. The example of Che is a perfect example of the totalitarian nature of capitalism, how capitalism tends to domesticate, replicate and turn to a profit even the symbols of its own would be nemesis.

Che compared to Christ? What an uneducated thought & opinion. Jesus came to give his life to sinners. "For even the Son of Man came not to be served but to serve, and to give his life as a ransom for many. (Mark 10:45) “It is not the healthy who need a doctor, but the sick. I have not come to call the righteous, but sinners to repentance.” (Luke 5:31-32) For God so loved the world, that he gave his only Son, that whoever believes in Him should not perish but have eternal life.” (John 3:16)

Che came to kill anyone against his evil cause. Che the murderer's quotes 1. “Crazy with fury I will stain my rifle red while slaughtering any enemy that falls in my hands! My nostrils dilate while savoring the acrid odor of gunpowder and blood. With the deaths of my enemies I prepare my being for the sacred fight and join the triumphant proletariat with a bestial howl!”Che Guevara

2. “Blind hate against the enemy creates a forceful impulse that cracks the boundaries of natural human limitations, transforming the soldier in an effective, selective and cold killing machine. A people without hate cannot triumph against the adversary.”Che Guevara

3. “I am not Christ or a philanthropist, old lady, I am all the contrary of a Christ … I fight for the things I believe in, with all the weapons at my disposal and try to leave the other man dead so that I don’t get nailed to a cross or any other place.” Che Guevara

thanks for your detailed response.

I will just repeat the issue that raised the comparison in the first place. Note the 1967 photograph (above) that was a powerful visual and artistic reminder of Che’s redemptive powers. His body was lying on a concrete slab, not on an erect cross. However, the deeply Catholic locals filed past the body, weeping when they saw that his destroyed body was Christ-like in its hideous suffering. I would have wept too :(