Alfred Stieglitz and the art of photography

Alfred Stieglitz (1864-1946) was born in the USA to German speaking parents. In 1881, all the Stieglitz children were shipped off to Germany for their education and while a university undergraduate, Alfred learned to love two great pastimes: travel and photography. Amazingly, for a rank amateur, he had some of his photographic writing published in German magazines and had some of his photos accepted in German competitions. Even more amazingly, Alfred began to collect the first books of what would become a very large library on the art of photography.

Stieglitz sailed to the USA in 1890 and went into partnership in a photo engraving business. Five years later, he became editor of American Amateur Photographer and became a founding member of the Camera Club of New York. It must have seemed like a fascinating new career for the young man. His own photographs were soft-focus, atmospheric studies that he called Pictorialist. For a modernist, these soft-focus images must have seemed rather traditionalist and backward yearning. 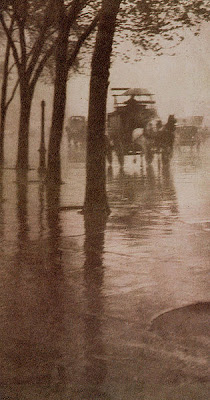 The Camera Club published a quarterly journal called Camera Notes, with Stieglitz as editor. The journal's readers might well have expected the exhibition reviews and technical articles, but I wonder if they were expecting academic essays on art and photography as well.

In 1902, Stieglitz was asked to prepare an exhibition of American Pictorialist photographers but the show was not backed by the Camera Club of New York. This split in the photographic world caused a new group, called the Photo-Secession, to emerge. The show opened in March 1902 under the banner of the new group. I suppose the world was well and truly aware of Secessionist art groups in Germany and Austria already, so Photo-Secession was merely another break-away group that linked photography to the art world. At some stage, the Photo-Secession had 120 photographers as paid up members. 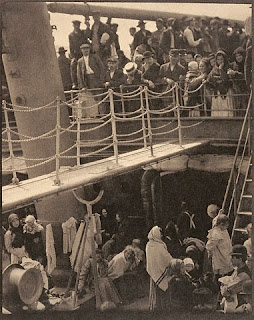 Soon he established a new journal called Camera Work, from 1903 on. This journal specifically dedicated itself to the study of aesthetics, so Stieglitz sought essays and poetry from European writers like George Bernard Shaw and Oscar Wilde who might not have been noted for their work on the art of photography. The photogravures were produced so beautifully that images from Camera Work could be framed up and shown in photographic exhibitions in the USA and Europe.

The Photo-Secession didn’t have rooms for its exhibitions until 1905. It was then that Edward Steichen gave up his own photographic studio and offered it as a gallery and headquarters for the organisation. The Little Galleries of the Secession opened in Nov 1905. To make the connection with the Secession in Vienna even clearer, Edward Steichen designed the interior of the New York gallery to match the look of his Viennese hero, the architect Josef Hoffmann. The Little Galleries, at 291 Fifth Ave NY, looked uncluttered and modern. Obermeyer Force blog called "291" one of the most progressive art galleries of its time and called Stieglitz the patron saint of photography. 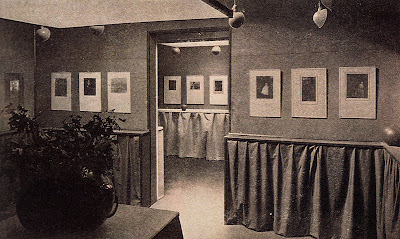 Stieglitz certainly included avant garde European artists in The Little Galleries exhibitions eg Rodin and Matisse, even though I doubt that they would have been popular in the USA in the first decade of the century. As “untitled at the moment” noted, Picasso was even awarded his first US show there! Luckily the magazine Camera Work didn't worry about critical popularity as Little Galleries had to; it could include the works of modernist artists, and did.

While he was enjoying significant artistic successes, money remained a constant problem. Most months the Little Galleries cost far more to operate than the income they achieved from print sales and from exhibition entry fees; membership in the Photo-Secession was declining and even subscriptions to Camera Work began to drop off. His father had left him a substantial amount of money in his will (in 1909) but it could not last forever. Wife Emmy’s inherited money was also running out. 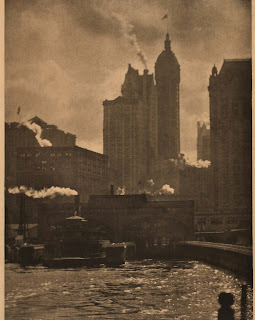 Susan van Wyk showed that Stieglitz played a critical role in the International Exhibition of Pictorial Photography at the Allbright Art Gallery in Buffalo. The City of Ambition exhibition in 1910 showed a modernising, constantly changing New York and I suppose Stieglitz was changing his views at the same time.  Note the strong contrasts in City of Ambition, particularly in the foreground. The background became more muted with distance and from atmosphere.

After 1910, the shows put on at “291” started to be dominated by American and European painters; it was a meeting place for artists, writers and critics, rather than just for photographers. However it did continue to be a venue that supported artists through the sale and exhibition of their work. In January 1916, Stieglitz was shown a portfolio of drawings by a young artist named Georgia O'Keeffe. He loved her art, and without meeting O'Keeffe, he made plans to exhibit her work at 291. 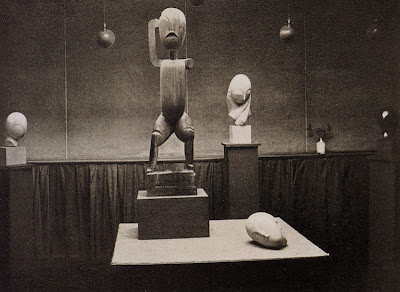 By 1917 young American men were being taken into the armed forces. The good times were over and Stieglitz left New York. He also sought a divorce from his wife, Emmy.

WorthPoint asked who were the 30 most influential American visual artists of the 20th Century? He thought Alfred Stieglitz was the seventh most important American in that 100 year period. I was well impressed, not only because Stieglitz was a fine photographer but also because he was one of the great sponsors of 20th-century modernist movements.

I do look forward to your posts. I worked for Grdon Fraser publications for a while and my boss was a great fan of Bill Brandt and I'm sure Stieglitz came up in conversation but I never investigated further. Thanks for filling another gap.

Helen I completely agree and have read much on Georgia O'Keefe and her relationship with Steiglitz. Fascinating background which I did not know!

All of this was new to me. Thanks for the post.

I am always amazed by all the stories, all the knowledge in the world.

I must read more about this. Thank you very much, Hels.

Hi Helen,
Great to read your post about Alfred Stieglitz.
There's an exhibition of his work on now at the Art Gallery of NSW. More information & curator's introduction here.
http://bit.ly/aU74zL
Cheers, Molly

Molly,
since your letter, spouse and I flew to Sydney to see the Stieglitz exhibition, and enjoyed it very much. Thank you for bringing it to the attention of Sydneysiders and visitors.

My feeling in seeing the published photographs is that it is so difficult to reproduce his work perfectly accurately in books and magazines (my normal sources of information). The subtleties of his works can be so easily changed or lost, usually quite unintentionally.

I recommend that readers have a look at the photos in Weimar's blog, especially the 1892 photo called The Terminal and the 1905 photo called Winter - Fifth Avenue. They add a great deal to my post.