Louis Vuitton (1821 – 92) was born in regional France. In 1835 he moved to Paris and although this trip was 400+ kilometers, he travelled the distance by foot according to his own mythology. En route the very young lad picked up a series of odd jobs to pay for his journey, including being an apprentice box maker to wealthy families. 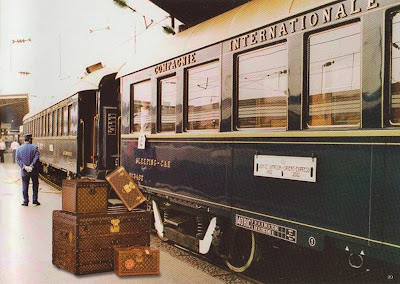 This young malletier or luggage maker was apprenticed to Monsieur Marechal, the man who helped Vuitton get work as a box maker for Napoleon III and his wife Empress Eugénie. Throughhis involvement with French royalty, Louis Vuitton developed an understanding of quality travelling cases. And after 17 years with the master,  Vuitton began to design his own travelling cases. 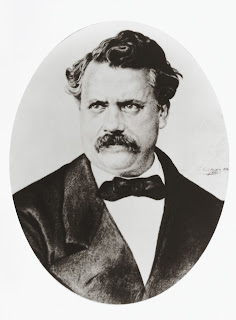 Louis Vuitton married Amélie Clémence Baglivo in 1854 and their son was born after three years later. 1854 was also the year that the Louis Vuitton label was founded, in Rue Neuve des Capucines in Paris. In 1858, Monsieur Vuitton introduced his flat-bottom trunks with trianon canvas, making them light weight and airtight. Before the introduction of Vuitton's trunks, rounded-top trunks had been favoured, but they suffered from not being stackable. It was Vuitton's grey Trianon canvas flat trunk that allowed stackability, thus making it useful for ships and trains. If people weren't sure how suitcases could be stacked, contemporary advertising made it crystal clear.

Once Vuitton was both successful and prestigious, other luggage makers began to imitate LV's style and design.

Vuitton itself grew too big for its original location and moved to Asniéres in North West Paris in 1860. Timing was everything, as in all historical events. That decade was important in the Company’s success story since the company participated in the fabulous Paris World Fair of 1867 and won its first international medal for excellence. If Vuitton had not burst onto the scene at a time of increasing luxury travel and of gorgeous World Fairs, would have been half as successful? Possibly not.

To protect against unscrupulous people copying the Vuitton image, he changed the Trianon design to a beige and brown stripes design in 1876.

His trunks were an almost compulsory requirement for those people wealthy enough to go on luxury train and ship trips to exotic locations. When the first Orient Express train left Paris for Constantinople in October 1883, we can be fairly certain that Louis Vuitton luggage was carried on board by teams of footmen and coach drivers. Steamer wardrobes, courier trunks, cabin trunks, suitcases, hat boxes and beauty cases would have been bought by royalty, the nobility and wealthy business people. 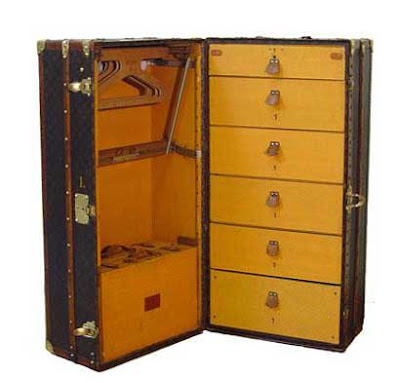 My favourite piece was the innovative malle Armoire whose interior design offered more spacious and versatile storage options than does my clothes cupboard at home. The largest piece in the company’s vintage collection, the wardrobe measured 100 (h) x 65 x 65 cms and included hanging space and hangers, many drawers and at least two storage boxes.

The cabin trunk was just as embellished with leather and brass as the wardrobe, but it was flatter for convenient storage on board a ship. Most were fitted with a removable tray. This one has beech wood slats on the exterior was 43 (height) x 72 x 30 cm.

By 1885, the company opened its first store in Oxford Street in London. Due to the continuing imitation of his look, the Damier Canvas pattern was created by Louis Vuitton just a couple of years later, bearing a logo that said "marque L Vuitton déposée," the L Vuitton trademark. This only increased the product’s international recognition, further boosted by a gold medal at Paris' 1889 World's Fair. 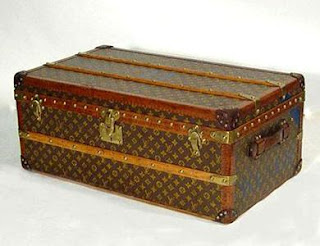 In 1892, Louis Vuitton died, and the company's management passed to his son Georges. His son didn’t hang around idly watching the business look after itself. Within one year, Georges Vuitton began a campaign to build the company into a worldwide corporation, exhibiting the company's products at the Chicago World's Fair in 1893. To this day, the label is well known for its LV monogram which is featured on most products, starting with luxury trunks and leather goods and later covering other objects. For the best photos from the LV Company's own archives, see Zoot.

It was under Louis' son's stewardship that the company invented soft bags. The first to be introduced in 1901 was the steamer bag, a big rectangular bag originally designed to store dirty linen during long ocean crossings. Just as well Louis had died 9 years earlier. He may not have liked the idea of his gracious products becoming softer, more casual and more modern.

I saw the Louis Vuitton vintage luggage collection displayed in the Ballarat Mining Exchange in the first week of May 2010. One fascinating item from after WW1 was a cigar trunk or humidor. The trunk was refitted by the artisans at Louis Vuitton to house 500 cigars in Spanish cedar boxes, inset with decorative burled walnut panels. If the show moves on to other cities, I warmly recommend a visit. 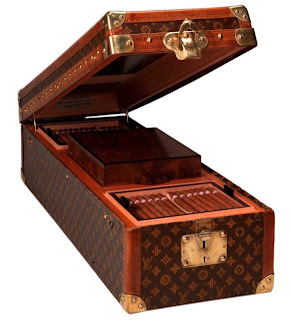 A new boutique hotel is opening in Paris next February called then Radisson Blu Le Dokhan’s Hotel, Paris Trocadéro. Housed in what was once the 18th century residence of the Dokhan family, this 16th arrondissement building was the site of Paris’ first champagne bar. Appropriately the hotel will still have a champagne bar on site. But for this particular post, there is something more interesting than sensational French champagne. The Dokhan house became the Louis Vuitton building, which was the largest travel-goods store in the world when it opened in 1913. The hotel, when it opens, will proudly display an elevator made from a single, vintage Louis Vuitton wardrobe trunk. 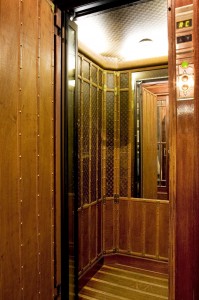 I am indebted to The Devoted Classicist and Mr. Rothschildt for pointing out the importance of  François Goyard (1828–90) and his Maison E Goyard, another luxury brand of Paris luggage makers. In 1853, a year before Louis Vuitton was founded, François took over a trunkmaking workshop from his father and went on to be the outfitter of choice for royals and aristocratic families. Goyard's and Vuitton's birth and death dates, geographic locations and product ranges are almost identical.

Fascinating post. I've seen some of the vintage ones at auction and they are really well made and seem so luxurious.

Hermes... sensible, beautifully crafted AND luxurious. What a clever man Vuitton was. And a man very much for his time!

I wonder why I haven't seen a photo or painting of him.

the company is now run by Patrick - 5th generation.

Interesting that copying was an issue right from the start. I read someplace that Vuitton is one of the top two or three brands for knock-offs (unverified!)on the planet.

Fantastic luggage, but bulky. Who would travel with so many clothes and who could afford the staff to carry it around.

Trainman, you are spot on. Louis Vuitton saw luxury travel opportunities open up for royalty, nobility and very wealthy families like never before.

Today we carry around no more than 20 ks, INCLUDING the weight of the luggage itself, on little wheels - no staff, no assistance.

I'm looking forward to travelling on a private jet with my Louis Vuitton luggage!

There's a Louis Vuitton shop up the road here. I'm only going to window-shop but I'd be happy to buy vintage at the right price. I find the brand's history very interesting too.

hello
i have a realy rare Louis Vuitton wardrobe, made with brown leather
and i would like to know more about it
how could i send some pictures to you see if do you know something about it
tks

Hey there Gaetano. Good to hear from you.

I simply reviewed the Louis Vuitton collection that I saw at the Ballarat Mining Exchange exhibition in May 2010. I know a great deal about the history of the company from 1854-1904, but you would need a Vuitton expert to examine your wardrobe.

Hopefully it is the real thing. If it is indeed an authenticated piece of 19th century Vuitton luggage, it can be worth quite a deal of money. Email the Vuitton Museum in Paris for advice.

Chris,
I have added a link to Zoot, a site that has many gorgeous photos from the LV Company's own archives. I don't know if it will help the unwary buyer with copies, but it will show us the beauty and the range of real LV travel objects.

I have added a link to two great blogs, The Devoted Classicist and Mr. Rothschildt. François Goyard and his Maison E Goyard should be discussed more.

Truly LV has such a great heritage. I only wish they continue to retain tha aura and charm across markets.

Good to see you. I wonder what the future can be for a company that raised 19th century luxury to new heights. Everything changes, and not always for the best.