The Hoddle Grid is the layout of the streets in the centre of the central business district of Melbourne. Named after its designer Robert Hoddle, the Grid was laid out in 1837 and later extended. It covers the area from Flinders Street in the south to Queen Victoria Market in the north, and from Spencer Street in the west to Spring Street in the east.

A perfectly designed grid in the centre of town was only possible in a newly created city that was being planned from the ground up. It would not be possible in a city that has developed, willy nilly over the centuries eg Jerusalem. Even a medieval city like Paris could only be straightened up somewhat by Baron Haussman, but it could not be made geometric. 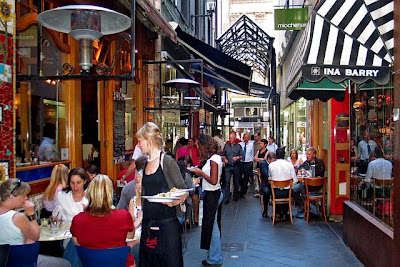 Hoddle’s goal was to establish broad boulevards and streets that would be elegant, European (sic), tree lined and spacious enough for any number of horse-drawn carriages – 30 metres wide. He gave many of them royal or vice-regal names. Narrow lanes, he felt, would only attract dirt, poverty and sexual immorality. Yet lanes did appear, exactly splitting the area between the main east-west and north-south boulevards in two. The Hoddle Grid below showed these east-west lanes but didn’t name them.

What Hoddle had not initially understood were the demands of trading. The planner either had to design in proper accessways himself or they would have developed on their own in an ad hoc way. Apparently practicality won over planning purity, and the lanes evolved as accessways between the major streets. Shops, hotels, pubs and offices needed access for their goods, services and customers – and got them. Furthermore, as well as providing access, the lanes enabled these rather densely packed buildings to feel lighter and airier. 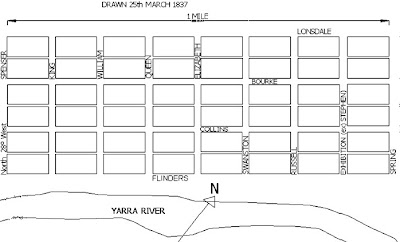 Lane names were never royal; rather their names reflected something of normal city life. A few examples will suffice. Named after Hardware House in the 1920s, Hardware Lane was built on land formerly occupied by Kirk's Horse Bazaar, a horse and livery trading centre built in 1840. The cobbled bluestone alley called Degraves St was named after Charles and William Degraves, pioneer merchants who settled in Melbourne from Hobart in 1849. William Degraves needed access for his sheep grazier business. Albert Coates Lane, named after a surgeon, was once the site of Melbourne's first hospital, and the current lane leads to a preserved pavilion of the former Queen Victoria Hospital.

The History of Melbourne confirmed that small workshops, tobacco and cigarette makers, printers, engravers, plumbers and boot-makers did indeed inhabit the city’s lanes. And they were indeed filled with rubbish bins from the adjoining businesses. No-one took responsibility for the lanes’ lighting, cleanliness or general amenities. It was only when planning for the Olympic Games led to new legislation in 1956 that the lanes were modernised, cleaned up and filled with coffee shops and wine bars.

The Hidden Secrets: Lanes and Arcades Tour was warmly recommended by Mitch's Blog, SheSaid Blog, and Bloesem World Tour blog. Intelliblog savours the delicious smells of the many cafés and bakeries that are open in the lanes for the breakfast trade at 7:00 am. I personally may be sound asleep at 7 am, but the heart of this large city is stirring.

Melbourne also features many covered arcades. Some began their life as lanes and were rather ordinary to look at; others began as elegant shopping malls and have remained so till today. But I have already discussed our lovely arcades in this blog before eg Royal Arcade. 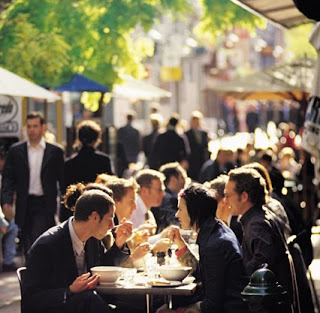 Fascinating. Love the look of those outdoor cafes.

I think it does look very European. Why is everyone in black in the bottom picture? It struck me right away.

Pup, Melbourne is as close to the southern coast as you can get, without falling off. Hot searingly dry summers and cool, wet winters. Thus, I am assuming, we have retained our Britishness, despite being only nominally subjects of Her Maj. And that might explain why city workers wear suits to work. Of course it doesn't explain the black, navy and dark grey preferences.

Paris is so enjoyable, partly because of its hidden lanes and arcades.

I haven't spent much time in Melbourne, unfortunately. It's hidden lanes and arcades are well-worth exploring too.

Please come and claim your Over the Top Award at my blog, Hels.

I find it a shame that Melbourne is losing so many of it's lanes to development. Lonsdale Lane and the wonderful Art Deco, Lonsdale House are being lost as part of the Myer redevelopment.

Thomas, I too find it tragic that the state government approved the demolition of Lonsdale House.

And what for? To widen Caledonian Lane to service the re-developed Myer Lonsdale St shop! Who destroys a gracious Deco treasure for trucks and loading bays? Hoddle would be rolling in his grave to see the beautiful streetscape destroyed.

Interesting post. I have also blogged about this subject some time ago:

Nicholas, thanks for the reference.. I added a link straight away.

You wrote about the lanes being upgraded with new bluestone paving. Do you know when that happened and if the city council took responsibility for all the costs?

I added another more recent link to Nicholas' blog because of the fabulous smells, colours, textures and decors he describes in our Melbourne mornings.

But also because of a factor that I had not considered before. "The patrons were not only commuters (from the suburbs), but also many city residents who come down from their apartments for breakfast in one of these cafés."

The Official Visitor Guide is Melbourne’s flagship guide, recognised as the authentic and official guide for Melbourne. The Guide in Autumn 2013 has a very useful article on Laneway Culture.

many thanks. I think it was great reading for country, interstate and international visitors.

High Riser has more, and much better photos of the lanes. See
http://highriser.blogspot.com.au/2014/03/melbournes-lanes.html

Agreed! I am so excited that the Hoddle Grid was designed for the young Victorian colony as far back as 1837! There were later modifications and expansions, but the initial principles were never overturned. Compare Melbourne's town planning to the random nature of Sydney's layout.