The earliest hardback cookbook I have seen was written up by Fragments, published originally in 1610. Called Closet for Ladies and Gentlewomen Or The Art of Preserving, Conserving, and Candying, the book invited the reader "To make Marmelate very comfortable and restorative for any Lord or Lady whatsoever".

Then something even more wonderful emerged. The Daily Mail 18th Dec 2009 reported that auctioneer Charles Hanson was stunned to unearth a copy of The Accomplisht Cook, Or The Art And Mystery Of Cookery, published 1665. It was in a trunk full of books that he was examining when clearing a house in Derby. 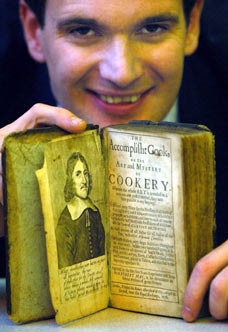 Readers might not expect me to write about cook books. But I found many blogs who were delighted with the May book and its recipes eg Gherkins & Tomatoes blog, lostpastremembered blog, Save the Deli blog and The Old Foodie blog.
*
This book was the first substantial recipe book to be published in England and ran to 5 editions. So it was special back in the 1660s, and is even more special now. Few books were published during the Civil War so when this book was printed after the 1660 Restoration of Charles II, it would have been read by the upper classes and used within court and for important social occasions. The book boasts a number of illustrations, also a rare feature for the time.

Robert May might have been a professional cook who specialised in preparing grand dishes for the great and the good, but even so, the variety of May’s dishes was huge. Other cookery books in that era were almost entirely focused on fruit, conserves and confections. Some household books were largely medicinal.

What is known about Robert May 1588-1685? He was the son of Edwarde and Joan Mayes and came from a family of noted chefs. His father Edwarde was the chief cook at Ascott Park, working for the Dormer family, so Robert was "bred up in this Art". Lady Dormer obviously placed great value in food; at the age of 10, she sent young Robert to France to train for 5 years. 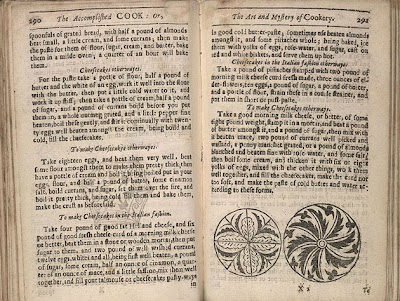 Why would anyone send a 10 year old abroad? Note that the Dormers were Catholic, a family able were able to successfully retain their faith with minimal persecution during a very troubled century. Perhaps she thought she could protect Robert’s Catholicism better in a Catholic country. Perhaps she though that French food was the standard to which young chefs should aspire.

Upon his return to England he finished his long apprenticeship in London working for Arthur Hollinsworth, then returned to the village of Wing in Bucks, becoming one of the five cooks reporting to his father at the Dormer family’s estate at Ascott Park. After Lady Dormer's death, Robert moved around the country serving in other aristocratic households. His was a long life and a long professional career.

The Accomplisht Cook, Or The Art & Mystery of Cookery was first written in 1660 when May was already 72 years old, and in it he shared his experiences and many secrets of his profession. May acknowledged the end of the Puritan Commonwealth, noting that his recipes 'were formerly the delights of the Nobility, before good housekeeping had left England.' His books give directions for many extravagant meat dishes, including a pastry stag filled with blood-like claret, a tortoise stewed with eggs, nutmeg and sweet herbs, and a 'pudding of swan' made with rose water and lemon peel.

May’s was consciously a book for the upper class gourmet, but he was aware that many of his readers were not rich enough afford such luxuries. Very cleverly, I thought, May specifically ensured that many of the dishes were relatively modest.

Along with recipes and general technical commentary, the book contained Robert’s effusive record of his indebtedness to the Persons of great Honour in whose households he had been privileged to serve.

The author wrote the book in Sholeby in Leicestershire. He identified himself as an Englishman who profited much in his cooking by living in France and by consulting Spanish cookery. As well as French recipes, he added recipes from Britain, Spain and other nations.

The British Library’s page noted that May was clearly indebted to French master chefs cooking in French aristocratic courts, but was careful not to overplay their influence, and thus run the risk of offending his English readership. So in the book’s preface he had a few digs at the French. “To all honest well intending Men of our Profession, or others, this Book cannot but be acceptable, as it plainly and profitably discovers the Mystery of the whole Art; for which, though I may be envied by some that only value their private Interests above Posterity, and the publick good, yet God and my own Conscience would not permit me to bury these my Experiences with my Silver Hairs in the Grave: and that more especially, as the advantages of my Education hath raised me above the Ambitions of others, in the converse I have had with other Nations, who in this Art fall short of what I have known experimented by you my worthy Country men. Howsoever the French by their Insinuations, not without enough of Ignorance, have bewitcht some of the Gallants of our Nation with Epigram Dishes, smoakt rather than drest, so strangely to captivate the Gusto, their Mushroom’d Experiences for Sauce rather than Diet, for the generality howsoever called A-la-mode, not worthy of being taken notice on. As I live in France, and had the Language and have been an eye-witness of their Cookeries as well, as a Peruser of their Manuscripts, and Printed Authors whatsoever I found good in them, I have inserted in this Volume.”

This extraordinary man died in 1685, aged 97. His book will be auctioned at Hanson's of Lichfield, early in 2010. A facsimile of the 1685 edition, incorporating Robert May's last amendments from 1665 and a great deal of biographical information, can be bought, or read on-line.

Two worthwhile blog posts have appeared recently, of great interest to foodies.  Cardinal Wolsey posted an article on the Tudor Kitchens cookery project at Hampton Court Palace. I would love to have been there! And Two Nerdy History Girls wrote that the very scholarly John Evelyn was so devoted to his vegetarianism that he wrote an entire book on the subject: Acetaria: A Discourse of Sallets. Published in 1699, the book suggested what kinds of plants and herbs to include in a salad garden, their cultivation, and recipes. Note the 1699 publication date - so soon after Robert May's book.
Posted by Hels at 2.1.10

What a fascinating post! The book sounds wonderful, and the recipes elaborate. Can't say I'd fancy "tortoise stewed with eggs" much myself, though (-:

What a fantastic find, and in such good condition at that. As a chef myself, retired actually after selling my restaurants, I just adore old cookbooks.

Although I spend most of my lectures discussing the Victorian and Edwardian eras, I actually find the second half of the 17th century to be the most exciting and influential era in European history. *sigh* I wish I had found something as precious as The Accomplisht Cook.

What an incredible find. If it's ok with you I like to share this with my readers and link back to you.

Enzie, Accomplisht Cook, Or The Art And Mystery Of Cookery 1665 is super, isn't it. I will look forward to your link.

What a glorious piece of history to have stumbled upon.