I found Garden Visit blog a very useful reference. Together with Kensington Gardens, Hyde Park forms a continuous park of 600+ acres in London. Stretching in a curve diagonally across the centre of both Hyde Park and Kensington Gardens is the Serpentine, an artificial lake of 41 acres. Slightly separated are Green Park and St James' Park, so that these four royal parks were and are a gorgeous and huge green area in the centre of an otherwise huge city.

Hyde Manor had belonged to the monks of Westminster Abbey from the Conquest right up until the Dissolution, when Henry VIII seized it and converted it into a royal hunting-park. Under Charles I, the place began to be a fashionable resort, though the deer were hunted until after the mid C18th. The King was laid out in Charles I's reign. It was a circular drive and race-course, located between the present Ring Tea House and the Ranger's Lodge. It was very popular with families who owned fashionable carriages. 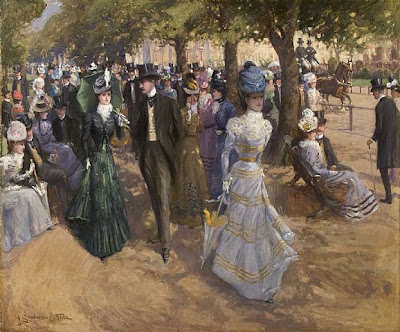 During the Puritan Commonwealth, the park was sold and the public had to pay for admission; but at the Restoration it reverted to the crown and soon became the scene of fashion and frivolity so graphically described by Pepys. Rotten Row was established by William III at the end of the C17th. William wanted, for his own travelling comfort, a broad track on the south side of Hyde Park, leading from Hyde Park Corner to the west. In William’s time, Rotten Row was a fashionable place for upper-class Londoners to be seen. On weekend evenings and at midday, people would dress in their finest clothes in order to ride along the row and be seen.

So Hyde Park was always lovely, but by Queen Anne’s time and after, the most fashionable hours at which to visit it were 5-7 PM in the Season, and between 12-2 PM on Sunday during something called the Church Parade. What was the Church Parade?

In Hyde Park, its history and romance (1908), Ethel Alec-Tweedie said that although Queen Anne did not herself encourage people to waste their time in the Parks, her reign saw Society considerably broadened, somewhat to the disgust of the older families. The City merchants, with their fine ladies, moved into the park to join their friends, and the Church parade of well dressed, well heeled families became an important function. The footpaths on either side of Rotten Row were the chief rendezvous sports for Church Parade. Society spent most of its Sundays there in the season, meeting and chatting, and so began the custom of sitting out on sunny Sunday afternoons. Church-going seemed to be an opportunity for show, of bowing to acquaintances who were present at the prayer-meeting, and probably making arrangements for later social arrangements. The fashionable service was in the afternoon, after which people again repaired to the Park. 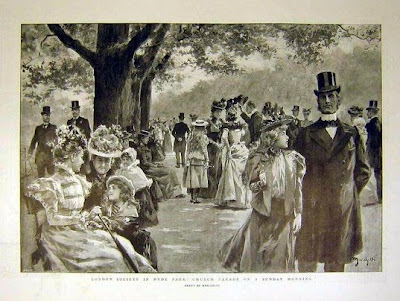 I found many mentions by foreign visitors to the Church Parade during the Edwardian era. In The American Woman Abroad 1911 Blanche McManus reported that Hyde Park on Sundays had that peculiar English society function, the Church Parade. This is a more intimate occasion, for everybody hastens here after church to promenade, prayer-book in hand, among the budding crocuses and narcissi in a silver-grey spring noon. There is none of the contagious gaiety of the French crowd, but the decorous, well-bred English throng is able to hide any dubiousness under a Sabbath-day varnish. Friends sit in groups on the penny chairs, discuss plans for the coming week, engagements, temporary and for life, are manoeuvred by mammas, and the Sunday church parade is often used to introduce a daughter to the social world. After this every one goes home to a roast-beef dinner. By five o'clock the carriages are so densely massed that it is only by courtesy it could be called driving. Royalty drives out with the rest.

Edwardian Promenade  was very helpful. Society returned to London in late May and the traditional starting signal for the Season was the Private View at the Royal Academy where the latest frocks could be seen as ladies and gentlemen strolled about examining works of art and discussing them with their artists. From this point on was the height of the season. With late dinners and later balls, visits to old friends and acquaintances, the Sunday Church Parade at Hyde Park (another event in which to see and be seen), attendances at Covent Garden, charity bazaars, and young ladies and new wives of qualified gentlemen making their curtseys in Court Drawing Rooms, days and nights were packed to the brim. London was packed with not only Britain’s brightest and wealthiest, but Americans and colonial millionaires desiring entree into society and a bevy of European aristocrats.

The P.S.A. and Brotherhoods were very impressed South Africans, even during the early years of WW1. "A noteworthy occasion in connexion with the campaign was our visit to the Southall Brotherhood. We can hardly forget the day; it was on Crocus Sunday when thousands of Londoners went to Hampton Court in crowds to see the crocus bulbs in bloom. It was a glorious day and we remember it as the second day in 1915 on which the European sun shone through a cloudless sky from sunrise to sunset. Thousands of people attended at Hyde Park to witness the Church Parade, and still more thousands took advantage of the glorious spring day after a strenuous winter to flock to Epping Forest and other popular resorts". 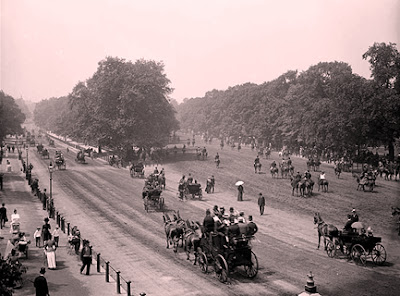 Of course the end was already in sight by then; I had expected that Rotten Row was going to end its starring role as the centre of Britain's upper class social life by 1914. Too many young men had been called up to serve on the Continent, too many families were grieving and even wealthy families would not have wanted to splash their money around when the economy was on a grim war footing. But there was something else. The decline of the horse and the popularity of the motor car changed Rotten Row for ever.

So it takes an Australian to fill me in delightfully with the social history of Hyde Park! Thank you. I spent a lot of time there over three years when I lived close by and, finally, swam in the Serpentine. I hadn't liked the look of it but my daughter plunged in on a very hot day and recommended it. I wished I discovered it earlier. What a shame I hadn't read your piece then.

I have always been curious about functionality in websites and, well, the world in general. I read this article with great interest. It does seem to me that the reason we comment is to speak our minds so why not have the comment field first? However, as others have pointed out, one gets used to the conventions regardless of reason.
online marketing

a very useful new post on Hyde Park and the horsey set is to be found in Edwardian Promenade, which adds to our knowledge of the era. I love blogging :)