The Bauhaus School at Dessau

In 1925 the Bauhaus School moved to Dessau (near Berlin) where the new building was designed by Walter Gropius and completed in 1926. 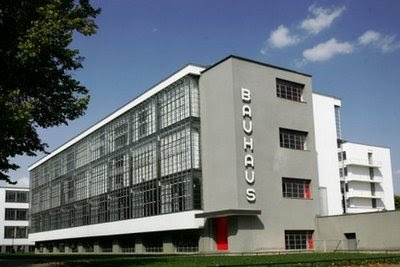 Marylouise Blog on Bauhaus Dessau has shown how Gropius' extensive facilities beautifully combined teaching, student housing, staff housing, an auditorium, offices, eating and other social facilities. These sections were all integrated: the school and work shops were connected via a bridge, over the Dessau Road. The administration was located on the lower level of the bridge, and on the upper level was the practice of architects, Walter Gropius and Adolf Meyer. The flats and the school building were connected via a wing to the communal facilities: assembly hall, theatre and dining room/canteen.

This radically modern building complex was built of starkly rectangular glass and concrete. The construction used the latest technological developments: a skeleton of reinforced concrete with brick workoom-shaped ceilings on the lower level, and roofs covered with asphalt tiles for walking. It was considered a fine piece of architectural design at the time, and is on the World Heritage List now. iainclaridge.net has a link to the most beautiful photographs of the building interiors I have ever seen. 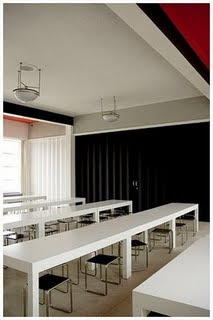 One detached Director's House became home to Gropius for a number of years. Three semi-detached Masters' houses housed the masters. Laszlo Moholy-Nagy and Lyonel Feininger initially occupied the first semi-detached house; Georg Muche and Oskar Schlemmer lived in the centre one; Wassily Kandinsky and Paul Klee shared the third. Again nothing was accidental. The masters’ homes were specifically planned to be models for students. Although the building costs were not cheap, students learnt how to create functional, modern, sleek homes. The three homes were all fitted out with a veranda and roof terrace, and all had working space for the artist and his family. Only the inside could be personalised with the artists' favourite colours and fittings. All fittings were of course Bauhaus designed and made. 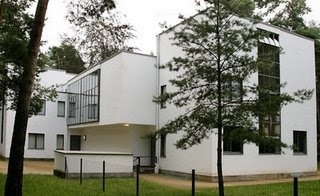 Bringing the building in on budget was possible only due to the hearty assistance of Bauhaus teachers and students. But it wasn’t their charity. Cooperation in design was explicitly viewed as an ideal means of education.

Many thanks to Bola Sociology Design who indicated that the building has become a youth hostel in Design: Bauhaus Dessau. I don’t suppose the accommodation is grand or the bathrooms private, but visitors do get to see the pared back architecture and minimalistic furniture that Bauhaus students lived in from 1925-1933. The chairs in the hostel’s bedrooms and canteen were of designed by another famous Bauhaus master from the 1920s, Marcel Breuer. 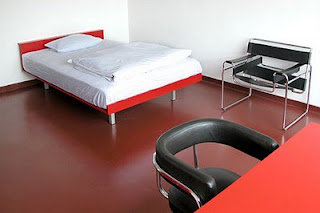 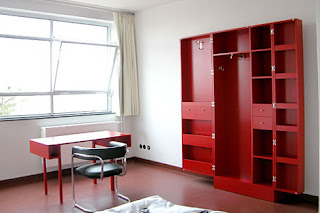 The Bauhaus’s next very important architectural commission in 1926-7 was an experimental housing project in Dessau’s Torten estate, not far from the School. Following the master architect Le Corbusier, the Bauhaus School felt that architecture should not be tied to any one culture. Architecture should be international in its style, intentionally designed to be mass produced with simplicity and adaptable to all cultures. The rectangle had been regarded as an ideal form by the De Stijl artists, and was fully adopted by the Bauhaus at Torten.

Torten was built with standardised concrete parts, made on site. Gropius was the architect, assisted by Hannes Meyer’s students. The initial construction of each house took only three days. They weren’t the most beautiful homes ever built; the mass produced interiors in particular were very austere! But 314 ordinary families suddenly found that they afford to buy a house and garden for the first time. The estate also contained a block of flats with shops beneath, the Konsum building.

PRESERVE THE MODERN  and SBeige blogs visited Torten Estate and found several units were open to visitors. I wish these blogs had provided some internal and external photos. It would be amazing to visit Torten now, some 83 years after Gropius and the students completed their project.

Always Greener blog needs to be linked to this discussion. They wrote "Bauhaus developed both fancy single-family homes for the well-to-do as well as cheaper buildings that look like the kind of slums and high-rises we dislike today". See http://notesfromotherside.blogspot.com/2009/08/cycling-through-eastern-germany-bauhaus.html

The challenge for us, Always Greener says, is to realise how progressive all of this was in 1926. Modern architecture comes in large part from Bauhaus!

Looking at the Masters' Houses, what is the difference between Bauhaus and Deco architecture?

Anon,
great question and one I found a bit tricky to answer. So here goes.

The term Art Deco was coined from the Exposition des Arts Decoratifs held in Paris in 1925. So we can say that the Art Deco people, originally based in France, wanted to represent modernity, speed, science, jazz and exploration in their architecture. They took decorative patterns from anywhere interesting eg Egypt, India, the Far East, ancient Greece and Rome, Africa and Aztec cultures. Art Deco could use bold colours on their buildings.

The Bauhaus architects and designers, based in Germany at the same time, gave priority to function over form in their buildings. Because decoration was utterly unnecessary for good function, their buildings tended to use clean materials, fast building techniques, stark exteriors (and interiors) with one neutral colour, and a relationship of cooperation and good planning between the various professionals on the job.

Bauhaus succeeded with the Torten Estate in Dessau. Antoni Gaudi, as we discussed in class, also tried to get good quality housing for workers but he failed.

the workers really needed decent working and living facilities in Catalonia in the 1890s, but either the time wasn't right or Gaudi wasn't the right man. His proposals remained at the drawing stage.

You will like the discussion about housing estates designed to improve the living conditions of working class people. Rotterdam has one of the most famous examples of this development - the Kiefhoek Estate, built from 1925 on and designed by Dutch architect J Oud. The two storey dwellings, less than four metres wide, accommodated a living room, small kitchen, toilet and up to three bedrooms. They will remind you of the Torten Estate in Dessau.

housing estates were very clever projects, nod. Although I was not familiar with the Kiefhoek Estate in Rotterdam, it certainly does remind me of the Torten Estate in Dessau (1926->) and of The Weissenhof Estate in Stuttgart (1927). They shared the same social programme, the same construction dates and the same Bauhaus-ish architecture.