In "Addled Art" by Lionel Lindsay and "Addled Art": dishonest art dealers, I noted that James S Macdonald and Lionel Lindsay were not the only fiercely anti-modernists in the Australian art world of the 1930s and early 40s. However they were definitely the most powerfully placed, thus influencing important public decisions. Jane Hunt’s 'Victors' and 'Victims'?: Men, Women, Modernism and Art in Australia in J of Australian Studies, 80, 2004 was useful in explaining their fear of modernity, so I will quote her extensively.

In the years between the two world wars the Australian art estab­lish­ment was run by a band of traditionalists who were at first irritated and later ser­ious­ly threatened by a bunch of critical young innovators. The story of the emergence of modern art in Australia seems to be about the vict­ory of the innovators. It is the victors who write history. Four key art histories present this story of victory: Australian Painting by Ber­nard Smith; Rebels and Precursors by Richard Haese; The Innovat­ors by Geoffrey Dutton; and Black Swan of Trespass by Humphrey McQueen. Smith argued that after WW1 'the old men of the tribe, their years of exile over, began to lay down the law for the guidance of the young'. Their chief objective entailed the prot­ection of the health, sanity and vitality of Australian art from the madness of Europe. In their day the Heidel­berg painters were regarded as innovative and modern. But many of them were in fact realists who mellowed with time and event­ually became art critics, publishers and trustees.

Their law-making coincided with the emergence in Sydney of small group of artists who, following European trends, exper­im­ented with a range of stylistic and technical innovations collect­ively thought of by many as modern art. By the 1920s a few artists had begun to ex­periment with modern aesthetic ideas. In 1926 two artists formed the Sydney Contemporary Group with a large proportion of modernist women artists. Two artists opened the Modern Art Centre in 1932. In 1932, two Melbourne art teachers formed the Melbourne Contemporary Group.

In the political and economic uncertainty of the early 1930s, the modernist move­ment gained sufficient scale to pro­voke the established experts to bellig­erence. By the late 1930s these tensions erupted in a series of cris­es in the Melbourne and Sydney art worlds. They re­volved around a dichotomous relationship between ideologically and artistically con­servative forces and aesthetically modern, politic­ally radical ones. The moments of greatest interest to art historians include the formation of the Academy of Australian Art in 1937 and the subsequent founding of the Contemporary Art Society in 1938; a series of challenges to the authority of the conservative art estab­lishment in Sydney; and the 1943 Archibald Prize to William Dobell. 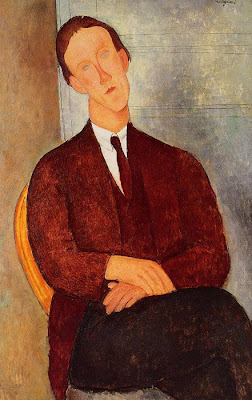 Modigliani,
Portrait of Morgan Russell, 1919.
Displayed at the 1939 Herald Exhibition of French and British Contemporary Art


When Robert Menzies (later Prime Minister) proposed the form­at­ion of an Australian Academy of Art, Melbourne modernists were con­cerned that their departure from conventional artistic practice would be marginalised. Their fears seemed confirmed when Menzies opened the Victorian Artists' Society show in April 1937 and singled out for attack a wall of modernist paintings. A deb­ate ensued in the press: Adrian Lawlor compiled the resulting copy in a booklet entitled Arquebus. Leaders of the modernist group, inc­lud­ing Lawlor and George Bell, formed the Contemporary Art Society 1938.

Herbert Vere Evatt M.P (later Leader of the Labour Party) be­came involved as an approving observer and occasional public advocate. At an exhibition opening in June 1937 Evatt urged Australian galleries to show more modern paintings. He drew a strong rejoinder from James MacDonald, a cultural conservative who had served as art director in New South Wales before moving to the National Gallery of Victoria; “Australian art galleries simply did not like modern art, and it should not be hung in public at all”, said MacDonald (11).

The Looking Glass blog recorded something very similar in The art of Mary Alice Evatt. The NSW Chief Librarian W.H. Ifould was also a trustee of the National Art Gallery of New South Wales. Ifould told people in the mid 1930s “there are no books on modern art in the Country Reference Section … because to the best of my knowledge no one in the country is interested in modern art”.

In March 1937 George Bell led an anti-Academy vote in the Vic­tor­ian Artists' Society on the grounds that the Academy would recognise only a lim­ited range of art­istic practices. Was it coincidence that mod­ernist exhibition entries were on prominent display when Menzies con­demned modernism at the opening of the Victorian Artists' Society exhibition? Evatt’s speech at the first Contemporary Art Society exhibit­ion, in June 1939, echoed the polemic of the debates.

Art historical accounts of the Sydney story draw on rich anti-labour, anti-Semitic, anti-modernist polemic, with the result of sketching neat divides that were more complex in real­ity. In particular, the art histories draw on the writings of Lionel Lindsay, member of the board of trustees of the Art Gallery of New South Wales. The main confrontations centred on the public display of the Herald Exhibition of French and British Art from late 1939, the award of the 1943 Arch­ibald Prize to William Dobell, and the nomination of modernist sym­pathisers to positions on the board of trustees. Lindsay and other trustees complained to James S Macdonald in Melbourne, and to a politically embat­tled Robert Menzies, over the travesties being wrought in the name of art.

Embedded in modernism is a sense of ambivalence concerning the reality of late C19th and C20th society and politics. While some creative intellectuals may have revelled in The Modern, others were deeply troubled by it. In writing on the metaphysics of modernism, Michael Bell captures the anxiety that the spectre of modernity evoked in some, in his discussion of the Coll­apse of Idealism. It appears that anxiety, anti-modern loathing, racial suprematism and fascist inclinations on the one hand and the open embrace of urb­an­isation, mass production and new aesthetic possibilities, on the other, may both be regarded as characteristic of modernism. 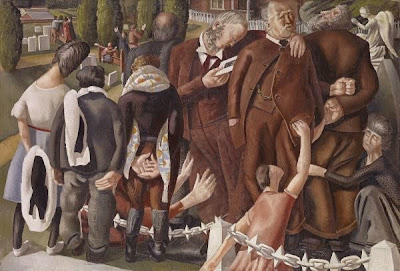 
While signs of modernity were apparent in Australia by 1913, modernism was something that, due to cultural lag, the highly liter­ate public only knew about European developments via newspapers. Modernism, in both its negative and positive strains, came late to Australia. It was only during WW1 that artistic modernism emerged in Australia, and in the wake of the war that the Lindsay brothers, state libraries and galleries and most newspaper critics and politicians, acting on a nostalgic isolationism, began to attack modernism in art and literary forms.

There was contradictory response to the modern. Lind­say's taste combined a conservative cultural nationalism with an isolationist horror at all the 'revolutionary manias of a rotted world', as he described modern Europe in 1923. Lionel Lindsay's views epitomised the fascist-leaning, anti-modern loathing described by Blair as one side of the possible intellectual response to modernity. However, as the William Dobell Archibald Prize nomination by Lindsay demonst­rat­ed, his rejection of modernist innovation was not absolute.

Artistic conservatives reasoned that art should serve as an educator in higher ideals, but did so in a way that justified their rejection of modernism in art in favour of idealised nature. The Lindsays genuinely believed that modernism threatened the Canons of Beauty. To James Macdonald, the New School set out 'to prove the innate ugliness of all that seems beautiful'. Modernists not only perverted beauty, but were 'unconcerned with and only affected infinitesimally man's search for truth'.(59) Only nationalist land­scape paintings were concerned with permanent things like Love, Truth and Beauty. It appears that artistic allusions to a set of eternal values, or lessons drawn from great traditions of the past were comforting in the uncertainty of the present, whatever the type of art that was seen to convey them. Idealism and nostalgia were both characteristic intellectual and artistic responses to modernity. 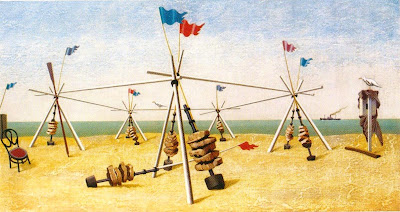 Edward Wadsworth,
The English Channel 1934.
Displayed at the 1939 Herald Exhibition of British and French Contemporary Art.

Conclusion
In all of Hunt’s excellent analysis, two thoughts stand out. In the political and economic crises of the early 1930s, the modernist move­ment gained sufficient scale to pro­voke the establishment to fear-based respon­ses. James MacDonald, for example, assured the public that modernism was 'gangrened stuff which attracts the human blowflies of the world who thrive on putrid fare'. Hunt doesn’t explain why the traditionalists used the neo-Nazi language of Josef Goebbels, but she does explain why these tensions erupted in a series of cris­es in the art worlds in the late 1930s and early 40s.

Your line in the email stopped me in my tracks: "The majority of Australia was conservative at the time (if not crypto-fascist) and anyone who did not choose to label themselves as radical at the time was assumed to be conservative". Then I saw that Jeannette Hoorn used the same word!

So I went back to Jane Hunt’s article called 'Victors' and 'Victims'?: Men, Women, Modernism and Art in Australia. It dealt with gender issues in particular, but I was more interested in what Hunt had to say about traditionalism Vs modernism in the interwar period. Anyhow have a look at the post "Traditional Vs Modern Art: 1930s Australia"
I owe you a beer.
Hels

Hi Hels,
I'm glad too have helped. And your article has helped me - I've been building up notes for an article about the Melbourne Artist Society - I don't know where it is going with this article yet but knowing that Menzies gave an anti-modern art speech roughly the same time as Churchill's famous casual and drunken remarks about Picasso, is interesting. I also didn't know about the anti-Semitism in Melb. art world of the 1930s.

I especially like the comment:
"It appears that anxiety, anti-modern loathing, racial suprematism and fascist inclinations on the one hand and the open embrace of urb­an­isation, mass production and new aesthetic possibilities, on the other, may both be regarded as characteristic of modernism."

It is important to see both sides of the coin - both sides are fanatics and both are reacting to the modern world. In my area of study in art history the similarities between the Dadaists and the German Fascists are very interesting. The way that the Dadaists hung their own exhibitions and the hanging of the Nazi exhibition of Degenerate Art are amazingly similar although with apparently different objectives (I say apparently because in both exhibitions the public was enjoying the shock of the new - the exhibition of Degenerate Art was the most popular exhibition that the 3rd Reich organized.)