Vanitas Paintings: the meaning of life and death

Histatic blog wrote a very interesting piece on Victorian memorial art called Art or a little morbid?. Tammi felt the post-mortem photographs were popular with Victorian families who, for whatever reason, did not have any portraits of the parents and children painted or photographed in life. I imagine that with peri-natal mortality being so high, with young men going off to soldier so often and with disease being largely uncontrolled, death was a common visitor in many Victorian homes. But how morbid was it to hang these post-mortem images on the lounge-room wall? I suspect not morbid at all. 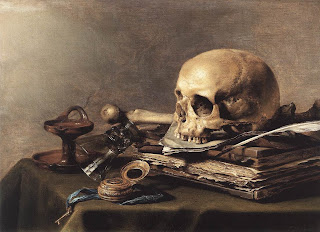 I was reminded of vanitas paintings from a much earlier era and wondered once again how morbid was it for devout Dutch burghers to hang these images on their lounge-room walls.

Vanitas was a type of still life painting that was very popular in C17th Netherlands. So popular was it that Charlotte Herczfeld said that over a hundred painters focused solely on vanities and other still-lifes in the Netherlands. And another thing. Intelliblog suggested that still life paintings gave the artist freedom of expression, as well as allowing much leeway in selection of subject matter, colours, composition and technique than did most other genres of painting

The word vanitas referred to the meaninglessness of earthly life and the transient nature of vanity, so vanitas painting were full of symbols reflecting this depressing world view. Vanitas paintings reminded the viewer of the transience of life, the futility of pleasure and the imminence of death.

Common vanitas symbols included human skulls; decaying fruit that could be full of creepy bugs; watches and hourglasses marked the shortness of life; wine paraphernalia and musical instruments which suggested that even joyous experiences would end in death; and lit candles, snuffed out before their time. I am not sure if viewers now would read and understand all the symbols, but I am certain that all viewers in the C17th would have immediately understood their meaning. 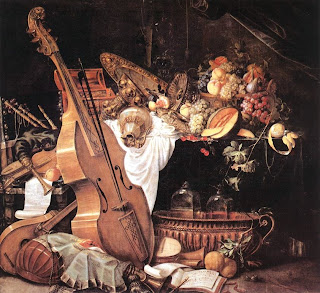 Pieter Claesz’s painting called Vanitas Still Life 1630 included more than one of these symbols. At a time when Italian art was soar­ing to new classical heights that celebrated Italian cul­ture, architecture, music, women and pleasure, Claesz was painting a tiny (40 x 56 cm), predominantly brown image dominated by an ugly skull and an upturned wine glass. Even the books on the table, a source of eternal wisdom, look battered.

Cornelis Janszoon de Heem painted a large (153 x 166cm) painting called Vanitas Still-Life with Musical Instruments in c1662. I am including this work because the elements were so rich that the modern viewer would be hard pressed to detect the vanitas elements. Note the viola, lutes, trumpet, flute, mandolin, violin, bagpipe, bowls crammed with luscious fruits and precious golden objects. But the snail on the ground, the half eaten fruit left to rot and the upturned objects tell of a sombre future for the family.

Nearly all Dutch still-lifes included an element of vanitas, even when a lumping great skull didn’t dominate the image. In Edwart Collier’s painting Vanitas Still Life 1697, the viewer noticed the implements that might be on any intellectual’s desk: ink-well and quill, candles, seals, wax, books and a globe, all within easy reach. Collier wasn’t criticising learning at all, but he was suggesting that even great learning isn’t eternal. If anything, this beautiful and detailed still life created a paradox in its very beauty. The message was consider the enjoyment of beautiful objects in a fine painting but at the same time be very beware of material concerns and intellectual conceits. 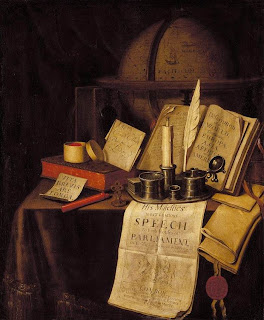 I recommend two other blogs on the subject. pre-Gébelin Tarot History blog has an amazing array of vanitas images in Homo Bulla Vanitas. And The Pond Seeker blog examined many examples of vanitas paintings, one of them being Holbein's famous Ambassadors, in Vanitas. His conclusions are worth reading.

For those interested specifically in the role of musical instruments in vanitas paintings, I wrote a guest post called "Musical Instruments and Dutch Vanitas Paintings" for Cynthia Wunsch's blog Strike The Right Note.

It is always an interesting question as to the extent that 17th century viewers did 'immediately understand' all the symbolism. Certain pieces of writing and books on art and symbolism from this period do suggest that the symbolism in such images was often highly complex and sometimes highly personal.
I can think of examples, not for still life painting as such, where guidebooks were actually written to be given to viewers to ensure they understood the symbolism.

Thanks for making that point, Katya. While it is easy for any viewer to decode rotten fruit, slugs and gutted candles, some still lifes were not immediately understood as vanitas images without assistance.

Edwart Collier's Vanitas Still-life (1697), for example, had none of the usual vanitas elements. One thing that I had never read before, but which you alluded to, was the "highly personal" element. Might vanitas paintings have been designed to fit the person who commissioned the work? A scholar might have loved the Collier image and found it relevant; a gourmand might not.

Nicholas described the flexibility that still life paintings offered to artists, an advantage that was missing with portraits, religious art etc. Good point.

Thank you for mentioning my blog in yours-it's very informative.