Cloudland was built in Brisbane in 1939-40 and was the venue for every concert and dance programme in that city from 1940 until 1982. Developers moved in at 3 am in November 1982 and illegally demolished this amazing building, full of chandeliers, tiered seating around the dance floor, domed sky lights and rich decorative details. The citizens of Brisbane were devastated, especially the ex-servicemen and their sweethearts who had once enjoyed R & R from the worst fighting in WW2”. 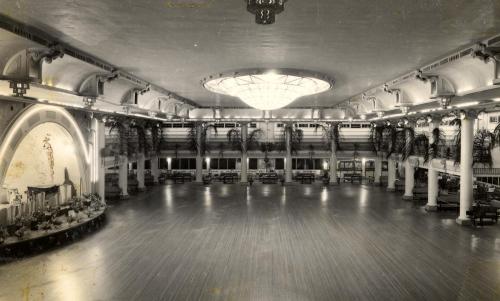 dance floor, domed sky lights, tiered seating and stage, post war
More recently Your Brisbane Past and Present blog wrote movingly of the writer’s personal history with Cloudland Ballroom. Other people wrote of how they had met their future spouse at dances and concerts held during and after World War Two. Sheba Also noted that many a baby was made from a night of competitive ballroom dancing at this particular nightspot.  Everyone mentions the very special view!

Being a Melbournian, I had no idea of the history of Cloudland. Apparently the architect TH Eslick thought he was creating a fun park in Brisbane, based on Luna park in Melbourne which Eslick had himself built in 1912. Another bit of exotica was the funicular railway which ran up the side of the hill, carrying passengers to the rear of the Ballroom. Eslick mysteriously disappeared soon after Cloudland was opened, so the building was left abandoned until 1942. At that stage, in the middle of WW2, the grand space began to be used by the American Military.

The builders believed that “With its private alcoves, upholstered seating, dressing rooms and perfect ventilation, Cloudland Dance Hall will be the finest of its kind in Australia”. It was no exaggeration, and Cloudland was without doubt one of the best dance and concert venues in the country: hard timber floors, décorative columns, sweeping curtains, domed skylights and chandeliers. The upper circle of tiered seating overlooked the floor and stage.

As noted this architectural delight sadly was destroyed by very nasty developers in late 1982 when it was illegally demolished in the early hours of the morning. The event sparked a massive outcry from the local Brisbane community against Queensland’s so-called development-at-any-cost Premier, Joh Bjelke Petersen. Developers had claimed that the old ballroom was beyond repairing. 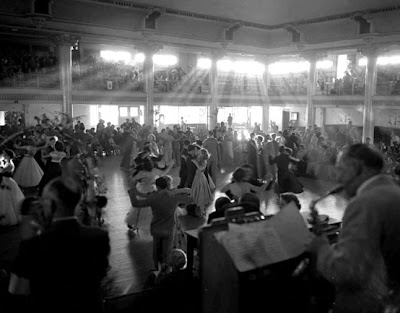 Ballroom Dancing Competition 1952
Today a new Cloudland has arisen from the ashes. Nic Brunner’s honouring of the grandeur of the destroyed ballroom can be seen in his new design, well photographed in the Architecture Revived blog.  But I am not sure that the name Cloudland, chosen in recognition of the lost architectural landmark, really continues the tradition of the original Cloudland. Once an architectural gem has been destroyed, it can never be replaced.
Posted by Hels at 6.11.09

its sad that architectural landmarks are senslessly demolished in the name of progress.
every landmark is apart of tradition culture and sentiments.
people and the authorities should see that they are preserved and protected!

Thanks Helen. I'm from Brisbane (currently living in Melbourne) and while I've always known Brisbanites affection for the old Cloudland I didn't know about the new Cloudland. Thanks for pointing it out. The new one also looks fantastic. I'm very glad to see some art in architecture once again ! Its been a long wait thats for sure ...

I received this letter from Qld.

"I am a film student at the Qld University of Technology in Brisbane. I'm currently creating a documentary that looks into the development of modern day Brisbane and the unfortunate trend our Government seems to have of demolishing the few buildings that have any historic and cultural value.

I've had a read of your blog post and we clearly share the same opinion over the tragic loss of such a fantastic and unique venue. I noticed that you are in Melbourne, so I was wondering whether you could put me in contact with anyone in Brisbane who used to go to the Cloudland Hall and would have some interesting stories to share.

The documentary will only be used for educational purposes, but will be made viral on YouTube. We are looking to set up interviews early next week, so if you let me know if you have anyone you think could help out and put me in contact with them, it would be fantastic!"

I do remember the Qld government very well from the early 1980s, in particular the destruction of Cloudland. But the ballroom was not part of my adolescence nor of my parents. When my dad came home during and after the war, they had the Palais de Danse in StKilda, now demolished.

So start with the blogger called Your Brisbane: Past and Present, and read http://www.yourbrisbanepastandpresent.com/2009/11/cloudland.html. Then check the articles in the Courier Mail Newspaper of late 1982. Another helpful source is Brisbane Stories: http://www.brisbane-stories.webcentral.com.au/core/01_cms/details.asp?k_id=312

I hope it goes well.

Find a Punk from the 1980s Brisbane scene...they'll tell you about the people's Cloudland.And it's Ballroom, not Hall.

naughty old you... you didn't do your reading. The complex was initially called Luna Park or Cloudland Dance Hall.

But there is something you might know, something I cannot discover myself. What happened to Mr T.H Eslick?

Timing is everything, isn't it. Had Cloudland not been built when it was (1939-40) and Eslick not mysteriously disappeared soon after Cloudland was opened right in the middle of WW2, I wonder if the history would have been very different. In other words, the American Military might have made Cloudland into a legend.

Although I agree with you totally, I don't know what could have been done differently, to protect the original Cloudland. As the premier and the police were on the side of development at all costs, ordinary citizens' protests always came to nothing.

And I am not sure we have learned much since 1982.

Is the documentary by the Qld UTB student still available to watch on YouTube? If so what is the link/ url as i'd love to watch it :)

what a good question. The letter was written in November 2009, so I don't seem to be able to find the writer's name or department any longer. I am so sorry.