The Fabian Society was founded in 1884 by the best and brightest of Britain’s reformist thinkers. Absolutely anyone I would have wanted to correspond with in late Victorian Britain was a member, including Sidney and Beatrice Webb, George Bernard Shaw, HG Wells, Graham Wallas, Leonard Woolf and Virginia Woolf, Ramsay MacDonald, Emmeline Pankhurst, Annie Besant and Bertrand Russell. Annie Besant was the subject of one of my early posts and a totally fascinating person in her own right.

The Society joined with trade unionists in 1900 to found the Labour Party, suggesting that the Fabians were not merely intellectuals and writers. The key elements of a modern democracy first emerged in Fabian pamphlets. They proposed a minimum wage in 1906, the National Health Service in 1911 and the abolition of hereditary peers in 1917, all of which has or will improve the quality of life of ordinary working families.

Along with Fabian Society members Sidney Webb and Beatrice Webb and Graham Wallas, George Bernard Shaw (1856–1950) founded the London School of Economics and Political Science in 1895 with his and other private funding. One of the LSE libraries is named in Shaw's honour and now has collections of his papers & photographs. 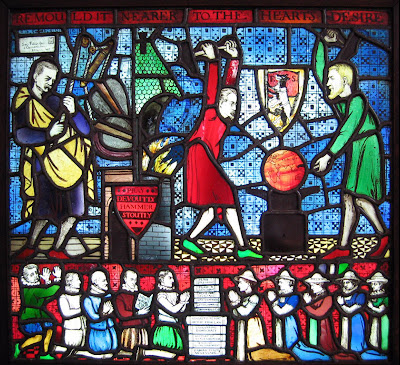 Window, designed by GB Shaw in 1910, 81 x 76cm
Despite being known as a man of letters, Shaw designed a stained glass window in 1910 as a commemoration of the Fabian Society; it showed fellow Society members helping to build the new world. Artist Caroline Townshend created the window according to Shaw's design, in 1910.

Vitreosity blog was very helpful in decoding the window’s elements. The figures are in Tudor dress to poke fun at Pease who evidently loved everything medieval. The Fabian Society coat of arms was shown as a wolf in sheep's clothing. The first man, crouching on the left, was HG Wells, cocking a snook at the others. He was followed by the actor-manager Charles Charrington, Aylmer Maude (translator of Tolstoy's War and Peace) and G Stirling Taylor (reading a book, New Worlds for Old). The women include suffragist Miss Mabel Atkinson and the artist who made the window, Caroline Townshend.

But where was the window to go? Apparently the window remained in Townshend’s workshop until after World War Two (1947), when Townsend's niece Eva Bourne took the Shaw window away. Perhaps she asked Shaw what he wanted to do with it, but being 91 at the time, he didn’t care.

The timing was good. In 1947 The Webb Memorial Trust bought a large Victorian country house near Dorking Surrey and called it the Beatrice Webb House after one of the Fabian Society’s important founders. The Trust established itself for 'the advancement of education and learning with respect to the history and problems of government and social policy'. 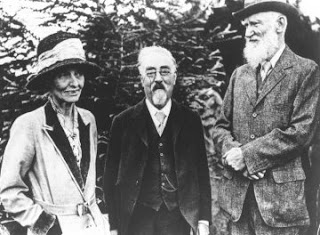 Bourne presented the Shaw window to Beatrice Webb House in the very year the house was formally opened by the Trust as an educational venue for the Labour party and Fabian Society. The house was opened by Labour prime minister Clement Attlee, also a former LSE lecturer.

It is unclear what happened to the window next. Americans stole from the house in 1978 and took it to Phoenix Arizona, but were they fans of the Fabian Society or its mortal enemies? The window did not resurface until it appeared in a Sotheby's auction in July 2005. The Webb Memorial Trust bought it, transported it back to Britain and have now loaned it to London School of Economics, to grace the School's Shaw Library. The LSE’s Press and Information Office was delighted.
*
This time the Fabian window was unveiled by a different Labour prime minister, Tony Blair. 2006 was the centenary year of the Labour Party, and the window had settled into the Fabian-founded London School of Economics and Political Science, the social science university institution founded by the Webbs and Shaw in 1895. And as Coxsoft Art News blog noted, 2006 was also the 150th anniversary of Shaw’s birth. The circle of connections and symbols was complete.
Posted by Hels at 8.11.09

That was a very interesting post. I agree with you and I like Shaw's plays but Nina Berberova's memoirs did turn me off him a bit. She complained that he supported the Soviet Union when he really should have known better. I will find the passage when I have time and write more.

Abimbola and Viola
Thank you both.
I am becoming interested in the overlaps and connections between the Fabian Society and the Bloomsbury Set. I may come back to this topic again.

I see your a fan of Shaw and an academic so I'm sure you would be able to explain why he can be seen on very old and rare video footage saying this- "You must all know half a dozen people at least who are no use in this world, who are more trouble than they are worth. Just put them there and say Sir, or Madam, now will you be kind enough to justify your existence? If you can’t justify your existence, if you’re not pulling your weight in the social boat, if you’re not producing as much as you consume or perhaps a little more, then, clearly, we cannot use the organizations of our society for the purpose of keeping you alive, because your life does not benefit us and it can’t be of very much use to yourself." I guess he was just being tongue-in-cheek and didn't mean it.
Did you like Hitler? Shaw did but only until he started killing Jews. I mean Shaw only advocated a culling along lines of class and not race. Silly old Hitler.
I was interested in you briefly touching on the Fabian mascot of the wolf in sheep's clothing I mean liberals are a meek bunch aren't they? I was waiting to read your explanation on why the Fabians are beating the world on an anvil(into shape of course because it's so imperfect).
I agree with the adage that goes to be a socialist at 20 shows you have a heart, but, to be a socialist at 40 shows you have no brain.

I really liked the Fabians because they played a major role in
1. the Labour Party,
2. a minimum wage,
3. the National Health Service,
4. London School of Economics and Political Science etc etc. All critical issues.

The years between 1884 and WW1 were progressive and largely successful for the Fabians. For Shaw (1856-1950), his creative years probably lasted even longer eg until 1930. But he was an elderly man by then.

Shaw was important for the Bloomsbury Set, wasn't he. And for Hogarth Press.

Yes indeed! Not only were the gender politics of the Webbs and George Bernard Shaw vitally important for the younger Bloomsburies. Shaw was also responsible for sending a lot of his publications to Hogarth Press!