Following the establishment of a rich irrigation colony in 1887 by the Canadian Chaffey brothers, Mildura was always a well planned city, laid out on a grid. The first buildings in the town were in the Victorian and Federation styles, using local red brick, corrugated iron roofs and wide verandas. This was to be expected from a small town where all the original buildings were completed by 1910.

However Art Deco was unexpected. What caused Mildura to embark on an ambitious building-programme during the Depression, throughout the difficult 1930s and into World War Two? One significant date might have been August 1934, when Mildura was proclaimed a city. Mildura Base Hospital was the first new large rural community hospital after the terrible Depression. It opened in August 1934, in response to the Victorian Government's call for a hospital system that provided services for ALL classes of the community. The semi circular ends of the building, designed as solaria to maximise light and ventilation, demonstrated the medical profession’s faith in light and fresh air. 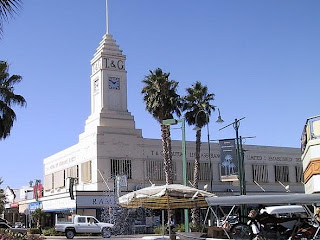 I was given a copy of the Art Deco Walking Tour Guide from the tourist bureau, and found it very simple to follow the map on foot. To assist the tourist to identify the buildings, typical Art Deco architectural features were listed:

1. The Mildura Brewery, Langtree Ave. The brewery and bar have been incorporated into the former Astor Theatre which had originally opened in 1924. As with many cinemas, The Astor enjoyed its heyday during the 1930s & 1940s. Inside the brewery, the key interior Art Deco style indicators of line, form and colour have been retained and enhanced with Art Deco styled light fittings, bar and floor pattern.

Bearly Sane blog noted that Mildura had been established as a temperance colony and the Grand Hotel was originally the Mildura Coffee Palace. From the amount of wonderful wine we drank in the city this year, I would say that Mildura do-gooders have got over their desire to get citizens to Take The Pledge! 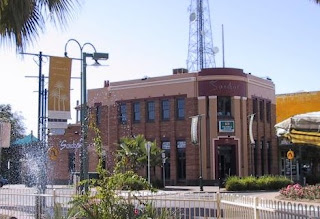 3. Commercial Bank Of Australia, Langtree Ave. Now the Sandbar this building was completed around 1932, on the site of a small bakery. It features decorative brickwork and streamlining with fluted columns at the entry.

4. The T&G Tower, 8th St, was built in the 1920s. It is one of a number of similar styled buildings constructed in regional centres. The symmetrical stepped detailing to the walls and top section of the clock tower are a classic Art Deco feature. The blog Art Deco and Modernism in Tasmania showed some splendid photos of a very similar T & G Tower in Hobart. 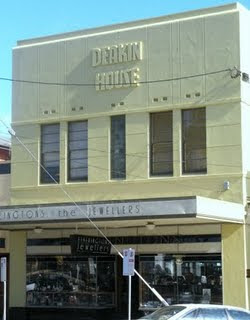 8. Etheringtons the Jewellers, Deakin Ave, was established in 1932 on the site of the former Williams Store c1890. The Art Deco shop front and interior is still intact, including signage and internal fittings. The front door is in the streamline style. 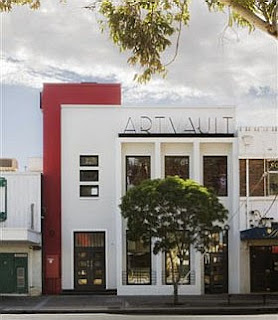 10. Mildura RSL, 10th St & Madden Ave. The building has wonderful stained-glass windows completed in 1954 by Mervyn Napier-Waller. At the time the artist was working on his greatest achievement, the wall mosaics for the Hall of Memory at the Australian War Memorial in Canberra. The repeated coffin-shaped motif of the RSL windows is reminiscent of Egyptian mummies and symbolises the spirit of fallen soldiers ascending to heaven. 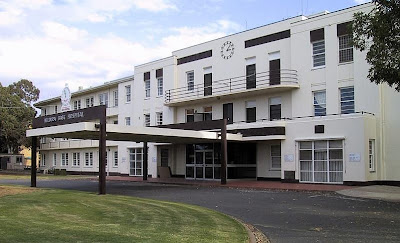 12. Mildura Base Hospital, 13th St. Built in 1933-34, the hospital was considered ‘moderne’ in design, with the main building a stream-lined horizontal linear block. It incorporated curved glassed in solaria at either end and an interior central Art Deco staircase.  Sadly this super building has stood empty for 10 years.

Alice Jean’s blog found Deco buildings both elegant and classy, in Mildura of course but in other parts of Northern Victoria as well.  2009 East Coast Trip blog also took super photos of the Deco in Mildura, then continued to find architectural examples in Griffiths, on the NSW side of the border.

Thanks for stopping by Hels, I always appreciate visits from other bloggers ... love your photos of Mildura, the Art Deco age has a lot to offer in the way of design...especially when it comes to jewellery! Yep, I know it's a long way from Architecture but the lines are the same.
Sandi

Thankyou so much for your comment on my blog and having just checked out yours, I must say I am so impressed! What wonderful documentation of architectural culture - beautiful !! I am now a follower. Kind regards, Kesenya

Greta art deco buildings. I haven't been there yet.
Sydney - City and Suburbs

Bearly Sane, actually I don't think jewellery is a long way from architecture. New styles, be they Art Nouveau, Arts and Crafts, Bauhaus, Art Deco or any other, travel fastest via "smalls".

All the deco buildings in Paris in 1925 could not have influenced the rest of the world as quickly as vases, brooches, advertising posters or statues of ladies walking greyhounds.

I have only been checking out Mildura on the net and it seems like they have a well set up walking tour.

The old hospital is amazing, do you know if it is still in an abandoned state?

Thomas, Mildura is just gorgeous. I would strongly recommend the walking tour because the printed details are clear, logically organised and historically helpful. I would also recommend good walking shoes - you get to cover quite a few ks, by the time you are finished.

Plans for Victoria's second casino development were revealed in Mildura in March 2010. The developer unveiled a model and plans for a $400 million gaming, entertainment and hotel development. I wonder what difference a huge casino complex will make to this lovely rural city.

I have just seen your Art Deco T&G building in Hobart. Very cool!