St Petersburg was beyond the Pale of Settlement, so how did Jews settle in that city? The History of the Grand Choral Synagogue of St Petersburg noted that young Czar Alexander II held liberal ideas. As a result some Jews, (retired soldiers, guild merchants, university graduates, craftsmen), were allowed to reside outside the Pale.

By mid C19th, there were ten small Jewish houses of prayer in the then Russian capital, but there was no Grand Synagogue to serve the entire Jewish community. However this always seemed a pipe dream since NO prayer hall could be big enough to seat 15,000 people at a time.

In 1869 the Czar gave permission to construct the synagogue to replace the existing chapels and fund-raising for construction began.

In 1870 the community board purchased a building, used as temporary premises for the period of synagogue’s construction. The community leaders wished the synagogue to become not only the house of prayer for local Jews, but also the symbol of imminent civil equality for Russian Jewry. 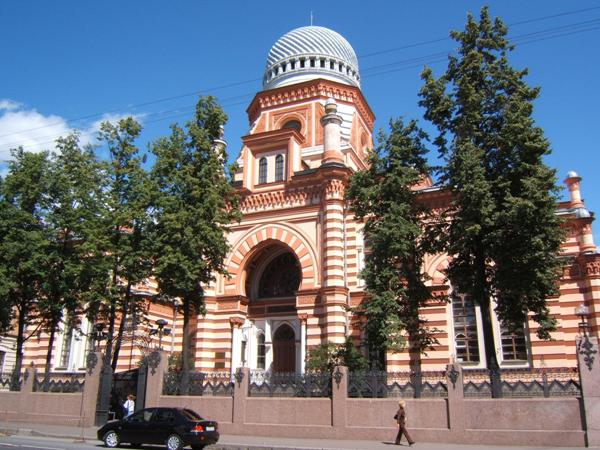 But there were problems in finding a site. The new building could not be close to a Russian Orthodox church, in a residential area on in a road where the Czar travelled. Finally in 1879, 10 years after the beginning of negotiations, the community finally got permission to purchase a block of land.

The discussion on the architectural project started in 1878. L.O Gordon maintained that “when building their temples, Jews never adhered to any hereditary style, but borrowed the style from the leading nation in that time and place”, and retained the inner sense of their religion “paying little attention to the outer looks”. But art critic V.V Stasov believed that the style of the future synagogue should be definitely close to Moorish.

After much discussion about design, it was decided that the building should be in the Moorish style which was then popular throughout Central Europe, as Ivan Davidson Kalmar showed. A jury selected the winning design, but when in March 1880 the design was submitted for Czar’s approval, Alexander II unfortunately ordered them to “remake the design at a more modest scale”. Fortunately, the architects agreed to make a new design for free. 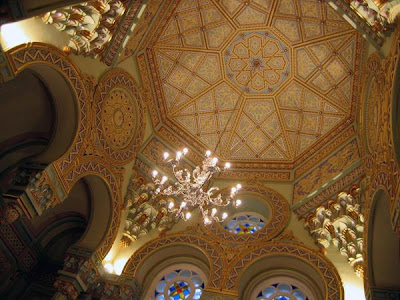 Finally in 1883 Czar Alexander III approved the draft design of the synagogue and building work started. In 1888 the cupola of the Grand synagogue was decorated with an ormanental design and the construction was finished. So the architects of this first grand synagogue in St Petersburg modelled it, in part, after Berlin's Oranienburger St Synagogue. The main entrance was a Moorish archway, a large horseshoe flanked by elegant minarets. The mass of stucco squinches and stalactite mouldings in the yellow and white decoration, was a combination of local taste and Moorish motifs. I suppose it was best described as a combination of Moorish, Byzantine and Arabesque elements.

In the next five years, interior decoration was completed. In Dec 1893 the ceremony of official consecration of the Grand synagogue took place. It was a real feast for all Russian Jewry. The leaders of the community opened the central door with a silver key and brought seven Torah scrolls into the hall. After a 24-year epic struggle, St. Petersburg Grand Choral synagogue was opened. The new fence, with an iron grille and two gates, finally went up in 1909.

Why was it called a choral or cathedral synagogue? Not because it could hold thousands of congregants and had stained glass windows. Rather because modest prayer houses in the past could barely afford to fund their rabbi's salary. Now the choral synagogue proudly funded a chazan/chief cantor, a choir master and a large male choir.

The Great Choral Synagogue of St Petersburg was always an architectural monument of federal importance, and it is now the second largest synagogue in Europe. But by the 1990s, the lovely ceramic floor covering, door and window infills were worn out and decayed. A large part of coloured stained-glass covering, as well as the decorative etching glass, were in a sorry state of repair. Panels and cornices looked tatty. Worst of all, unless complex restoration drainage and hydro isolating works were performed, drainage problems from the neighbouring blocks of land would destroy the foundations. Fortunately major reconstruction was carried out between 2000-3.

It was strongly believed that the special status of St Petersburg and its Jewry required a special approach to the city's 300th anniversary in 2003 e.g a classical music concert by a world-famous orchestra held in the synagogue. So they invited conductor Zubin Mehta and the Israel Philharmonic Orchestra to perform. To Mehta, the Indian-born maestro of Israel's main orchestra for 34 years, the concert had a special meaning: half the musicians were born in the former Soviet Union; some were educated in the St Petersburg Conservatory. 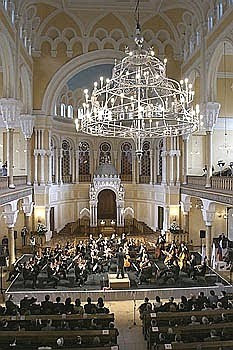 Mehta and the Israel Philharmonic Orchestra, 2003

In the same synagogue, Cantor Marlena’s Blog heard an excellent musical performance but on a smaller scale. The cantor was good and the five-voice, male choir sang music from Salomon Sulzer and Louis Lewandowsky, my two most favourite Jewish choral composers in the universe.

Cantor Marlena wrote
Dear Hels,
Thanks for your question about my blog.

There are quite a few synagogues in Europe (or were in Europe before WWII) called "Choral Synagogues" and it is because of the choir which was a symbol of status and esthetic quality. The services conducted in these synagogues were quite a show with the best cantors and choirs.

There's probably a book out there about the choral synagogues of Europe.

I'd love to go to St.Petersburg! Thank you for your very interesting post about this synagogue. The building certainly looks beautiful in the pictures.

two tumbs up for your idea...
I'd love to if you visit my simple blog
Bolehngeblog

I have added another cathedral aka choral synagogue (Birmingham) to my blog and will create a link to St Petersburg.