For an excellent history of Sydney’s first Jewish congregation, read Rabbi Raymond Apple's history of the Great Synagogue, Sydney. The formal establishment of Sydney’s first Jewish congregation came in Nov 1831 when “The Jews of the colony assembled at the Jews’ Synagogue held over Mr Rowell’s shop in George St”. Later interior alterations were made by Barnett Aaron Phil­l­ips, a carpenter who had worked at Drury Lane and built Aust­ralia’s first stage scenery in the Theatre Royal. The synagogue ark 1830s was one of the earliest pieces of religious furniture in the country.

Eventually numbers of congregants grew to over 300 adults, so larger premises were leased in Bridge St Sydney. When even bigger facilities were required, a building went up in York St Sydney. This new synagogue had comfortable space for 500 seats and was elab­or­ately furnished. Its ark, larger and even more impressive than that in Bridge St, also survives. The final move came in the 1870s when a site in Elizabeth St was purchased. 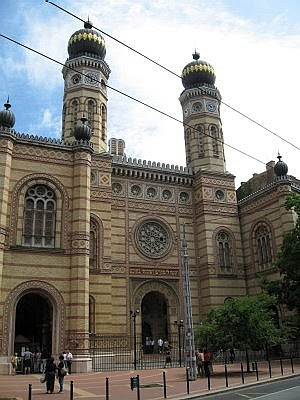 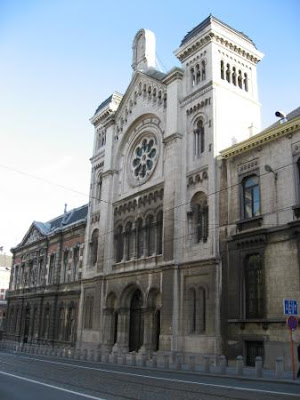 A comp­et­ition for the design for the new building was won by Sydney architect Thomas Rowe, who planned a building in the French Gothic taste. For financial reasons his plans had to be modified, so Rowe did not get to create his elaborate, dream building. But it didn’t matter; the foundation stone was laid in 1875. 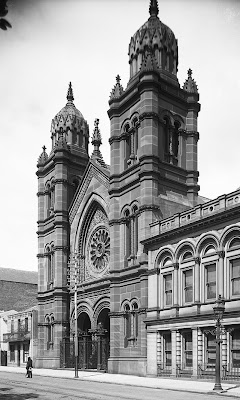 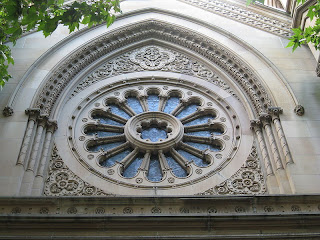 The Great Synagogue was consecrated in 1878. This cathedral synagogue was built in sandstone in the neo-gothic style of course, but with some clear Byzantine elements. The most cathedral-like element was the giant rose window in the front wall, facing Elizabeth St and the gorgeous Hyde Park outside. Two square towers flanked the central compart­ment, terminating in beautiful domes, and the entire front was enclosed by ornate cast-iron gates as seen in the Sydney Daily Photo blog.


The interior of the synagogue was designed to maximise the sense of space, due to the height of the cast iron columns. The main décor­at­ive elements were the moulded plaster decorations, the panelled and groined ceiling, carved timber work, stained glass windows and gas-light pendants. As fas as I can see, the deep blue ceiling and silvery stars represented the night sky. 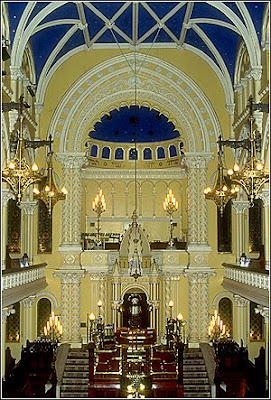 Interior space, men on the ground floor, women in the upper gallery.

Sydney City and Suburbs blog showed a delightful photo as the front appears now, still beautiful but hemmed in between the two adjoining buildings. The building is heritage listed. 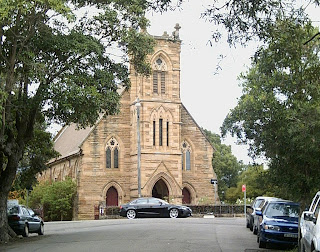 Keith's Site of Sydney Life showed St David’s Uniting Church 1869 that was designed by the same architect, Thomas Rowe. In particular, note the square Norman style tower, not totally dissimilar to the square towers in front of the Great Synagogue, created just a few years later. 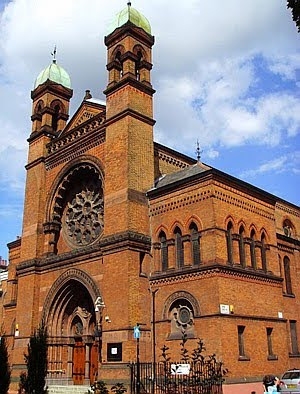 
Another comparison will prove useful. The New West End Synagogue 1879 in St Petersburgh Place Bayswater, is one of the oldest and most impressive synagogues in London. Compare the date and the architecture with the Great Synagogue in Sydney.

Interesting that they chose a Gothic Revival design, with its overtones of Christianity, but then I suppose that the Gothic look was still extremely popular in the 1870s and was used for so many non-ecclesiastical uses.

I don't know a great deal about Synagogue architecture but it would be interesting to know how closely it followed church styles and fashions from the different periods, or perhaps there is also a unique architectural style that was used as well as the pervading fashions of the day.

I wonder if any other faiths used the Gothic Revival style?

Good point, John. Most of the great synagogues in Europe, North Africa and the New World were built in the 1850-1900 period, and were faced with a difficult choice - what architectural style to select that would differentiate the synagogue from all the churches or mosques around it.

Without any evidence whatsoever, I have two guesses about the Sydney design:
a] the members of the synagogue board gave the non-Jewish architect plans and photos of the Great Synagogue in the City of London (destroyed in the 1941 Blitz). They would have told him "this is basically what we want".

Or, more likely b] the non-Jewish architect was given a detailed list of the liturgical requirements of a synagogue and told to create something wonderful. Naturally the architect would draw on his own considerable experience in creating religious buildings.

Thanks for all the history on these great buildings. As you know, I featured a photo of the Sydney Great Synagogue last week, but great to learn so much more here. Thanks for the link to my blog too. Cheers, J Bar.
Sydney - City and Suburbs

Mr Bar, of course I knew. That is why I cited your photo and asked people to go and look at it :)

I had actually been intending to write about a fabulous 19th century synagogue in Algeria. But when I saw your photo, I thought I better have a look at home first.

Next week, if I have the energy, I will make some interesting comparisons in syngagogue architecture in very different countries.

Thanks again for your great photo
Hels

Nice blog..to remind the history in these buildings..great work.
Work from home

Thanks for your comment on my recent blogpost. I had forgotten that I'd written about the New West End Synagogue last May. Here is the link:

That's is a great place in Sydney.
Thanks for sharing!

I haven't had a good look at these late 19th century gems for ages. Thanks for reminding me.

2018 marks the 140th anniversary of the consecration of Sydney’s The Great Synagogue, which took place on 4 March 1878. The Great is the Mother Congregation of Australian Jewry, and almost every Jewish family in Sydney has some connection to the Synagogue. Its building is recognised as one of the most beautiful Jewish places of worship in the world.

To mark this major year The Great Synagogue will be hosting a series of special events. The celebrations commence with the official birthday service of the Synagogue on Saturday 3 March, 2018. The Synagogue has invited its members, and the broader community, to celebrate this milestone with dignitaries from Federal, State and Local Government.