During the later 19th, Jewish communities liked to build large, confident syn­agogues. The buildings had to be big enough to handle all the congregants AND they also had to show that Jews were modern, educated citizens. So the synagogues needed to be architecturally impressive. By mid C19th, the Moorish mudejar style was adopted by the Jews everythere, reminding people of the golden age of Jewry in medieval Spain. Moorish Revival style was quickly adopted as a preferred style of synagogue architecture. 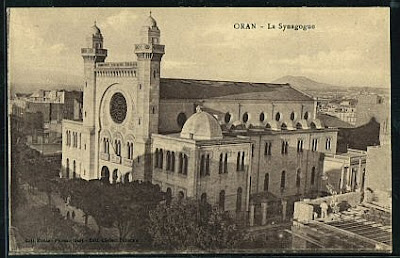 The Great Synagogue of Oran, Algeria


There were 17 synagogues in Oran, a port city on the Mediterranean coast of Algeria, by mid C19th. The biggest of them all, The Great Synagogue, was built and consecrated in 1880, although its in­auguration had to wait until World War One was finishing. Designed in the Orientalist style, it was one of the largest and loveliest synagogues in North Africa. This style was of course in keeping with the rest of the Jewish world. 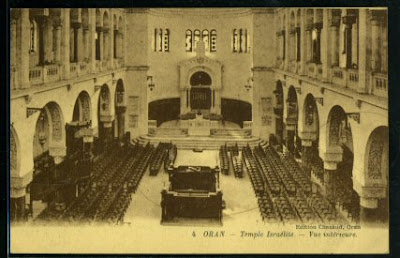 
I have no coloured photos from inside the building so I am totally grateful to the blog Une belle histoire for the post La Synagogue d'Oran - C. He wrote of the multi-coloured stained glass window which lit up the interior. On each side of the main building, the archit­ects created a tower 20 ms high. Three large doors, surmounted by windows, opened onto the nave. Inside, the aisles were separated from the nave by arches that supported columns of red marble. 960 solid oak seats occupied the ground floor.


The Algerian war against French colonial rule placed the Algerian Jewish community in great jeopardy. Sleevez blog showed how the city's Jewish community of 30,000 people continued as best they could in regular life, but from 1954 on, the situation of the Jews deter­iorated. Samuel Gruber's blog and Point Of No Return blog discuss the utter destruction of the lovely synagogue in Algiers by a mob in 1960, but the Oran synagogue seems to have simply been confiscated.

France finally granted Algeria nat­ional independence in July 1962, but worse was to come for the country's Jewish citizens - the Algerian Nationality Code of 1963 granted citizenship in the new state only to Muslims. The end of this ancient community was near. Once the huge community had left, the synagogue was later seized by the government (in 1975) and converted into a mosque, the Mosque Abdellah Ben Salem. At least this wonderful architecture is being used again. 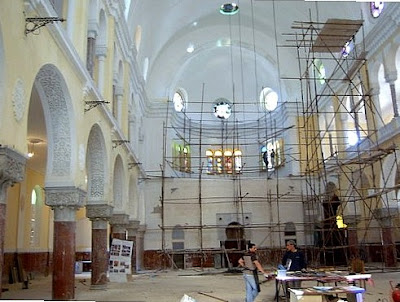 hi there ,i'm Algerian and i build a 3D model of this synagogue as a mosqué here now ,it is my work for graduation as ingineer in land survey ,if u r intersted about it contact me on ,avril.jil@gmail.com,thanks

hi ,i told u to cantact me at my email coz i didnt see that blog from a long time ago ,here is the links to see it now


plz contact me at avril.jil@gmail.com coz i often forget this link

Djilali
many many thanks, I loved the photos in the first video. The architectural integrity of the old synagogue seems to have been preserved and the colours seem to be even lovelier than the original.

I hope Shanidze and other readers also examine your 3-D model.

hi and thanks for the answer ,tell me did u see the 3D model in the second video u too ?

can i have ur email plz ?

thanks for ur interest to my town

this is the update of the link
http://www.youtube.com/watch?v=VBnYu3PKg7A

The old synagogue facade seems to be intact and still very impressive, but the interior is now whiter, more open and filled with natural light. The architects did a great job.

My name is Alice Yuan, and I am currently a sophomore at Wellesley College. I am currently interning at Diarna, a Jewish heritage organization dedicated to restoring a virtual world of Middle Eastern and North African Jews through the internet and Google earth. My current assignment is to research the grand synagogue of Oran, and I came across your beautiful pictures. I was hoping I could use your photo in my site report, and of course, I will credit you for the picture. I would greatly appreciate it, your pictures are wonderful!

Thank you so much for taking the time to read this request, and I can't wait for your response!

I used the old postcards because they were over 100 years old and therefore did not need permission. But why not contact Une belle histoire: La Synagogue d'Oran if you want 20th century photos
http://macommunaute.over-blog.com/article-29400953.html.

Good luck with your studies.

It seems you are very proud that the synagogue is now a mosque which tells me you are happy that the Jews of Algeria were exiled and that the synagogue, which you did not pay to build, was confiscated. You and your country have desecrated another Jewish place of worship with no shame whatsoever. Why does one have to be a Moslem to be a citizen of Algeria? Is it because your culture is that of a thieving apartheid country. May your prayers in the great Snagogue of Oran not go answered as you have blemished the building by converting it into a mosque. Remember, you can put lipstick on a pig and it is still a pig.

Me and my country? My culture? I think you didn't understood the English in the post. "Confiscated" means seized by an authority, without payment.

Read the post again and read the book A History of the Jews in North Africa, by Haim Zeev Hirschberg. Then read all the other posts about saving synagogue architecture in this blog.

Hello everybody
easy easy Anonymose ,it was't me who Confiscated this synaguogue to a mosque ,when i was born 1986 it was already confiscated so don't blame me please,secondly who sad that i'm happy or angry ? i am technichal engineer and i did my job ,do u want from me to cry or what ? and if you want talk about politics this is not the right place.have a good day