Regarding “Addled Art”, John Hopper wrote: I once read that one of the Nazi links of Modern Art with Jews was that artists who were trying to paint classically, would throw away their failures, which would then be salvaged by Jewish art dealers to be sold to the gullible public as Modern Art. To believe that convoluted story would be a gullible act in itself.


Agreed! My feeling is that anti-Semitic, anti-modernist art critics felt they could not blame the artists themselves for horrible paintings. Nor could they find fault with the stout art professionals who were directors of the important art galleries. So they had to find someone else who might have sneakily pushed second-rate, miserable, modern art on an unsuspecting Christian public – the Jewish art dealers! I will present some European and American examples of racism before coming back to the Australian book, Addled Art.

In Stills and Narration from 'Der ewige Jude' (The Eternal Jew) 1940, the narrator said “These days we find it hard to believe such pieces (of art) were once purchased by almost every state and city gallery; they had to be, because Jewish art deal­ers and Jewish artists extolled them as the only true modern works of art”.

The Visual Arts in Germany 1890-1937 by Shearer West quoted from the Degenerate Art Exhibition catalogue of 1937. Abstract art was lab­elled “sheer insanity” and the excess of all the isms was at­tributed to the machinations of Jewish art dealers like Flechtheim.

Stephanie Barron editor of Degenerate Art: The Fate of the Avant-Garde in Nazi Germany was a great source. She wrote that in 1933 the earliest exhibitions of degenerate art were organised to show the German people the products of the “cultural collapse” of Germany that would be purged from the Third Reich. Confiscated works were assembled into Chambers of Art Horror whose organisers decried the huge public moneys that had been wasted on these modern horrors. It implied that many of the works had been foisted on the museums by a cabal of Jewish art dealers. 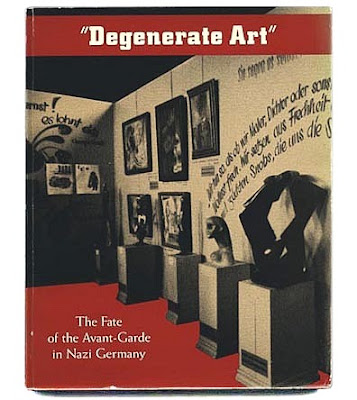 Degenerate Art Exhibition (Barron book). Prices were displayed next to the paintings, to show how corrupt art dealers had secretively spent huge amounts of public moneys on so-called modernist rubbish.

In Modern Art, Peter Watson reported Jews have been particularly pre-eminent in the ec­on­omic exploitation of art and the formation of its commercial value since the rise of "modern art" in the 1880s. In that era, the centre of the art world was Paris. "There were two groups of impor­tant art dealers in Paris in the first half of the twentieth century; one was made up of Daniel-Henri Kahnweiler, Paul Guillaume, Felix Feneon, and Leonce and Paul Rosenberg, dealers in contemporary works. The other was an equally tight-knit but smaller group of dealers who formed the elite secondary markets dealing with Old Masters and increasingly in the Impressionists. At the centre of this group were Nathan Wildenstein, Rene Gimpel and Jacques Seligmann. Loosely attached to them were three other dealers in London and New York, Samson Wertheimer and Roland Knoedler, later run by Charles Henschel until after World War II." "Paul Rosenberg's strait-forward approach and steep prices shocked Parisian art circles and made him the subject of savage criticism." He even once said, "As for me, a painting is beautiful when it sells." Among those in Rosenberg's art stable was Picasso, formerly signed to David-Henry Kahnweiler & Rosenberg's brother Leon. All these people were Jewish. (p219-20)

Peter Watson had even more viciousness to say about art dealers. “Many Jewish art dealers grew to be extraordinarily successful. In 1909 Jacques Seligman "astounded Paris by acquir­ing the Palais de Sagan, an even more luxurious house. Seligman was the main art supplier for the French Rothschilds as well as JD Morgan; he was also known for his contacts in Russia". "Possibly the most successful, and certainly the most secretive art dealer was Nathan Wildenstein." "Another reas­on for Wildenstein's success was his close association with Duveen and Gimpel, which made each others businesses truly international." [p220-4]. "Notoriously dishonest, Joseph Duveen was another prominent Jewish art dealer in the early decades of the 1900s. Upon his move from Europe to New York City, Duveen was charged in a legal "case that attracted enormous publicity" with evading customs duties of $102 million at today's values. Connections with several United States Senators and other men of influence helped Duveen evade the law. [p166]

Lionel Lindsay didn't quite have all those details, but he did allude many times to the illegal or immoral way that dealers got their modern art. Re the decline of France, Lindsay said "the writing was on the wall when the Jew Stavisky was discovered to have bribed more than half the members of the Chamber of Deputies" [page ix].

And "how proverbially shrewd was the confraternity of Jewish dealers, who added the pleasure of “taking down the Goysher” for immensely over priced works of ultimate questionable value to forcing the painters of their race on the credulous Christian" [p19].

“The public was completely bewildered. Artists raged, protested, watched the spread of the epidemic sponsored by the Jew. Some abandoned their able practice to enter the arena of novelty and compete with the impostors” [p25].

“I saw at the 1926 Venice International the largest pavilion devoted to Italian Futurism. It was literally the most gigantic joke ever ex­ecuted in paint. When 4 years later I returned to Venice, Fut­ur­ism, unchanged and exhibition nothing fresh, was confined to a small room and soon afterwards disappeared. It was not so lucky as the Ecole de Paris. It had no Jew dealers to ensure its continuance” [p26].

“Except in Australia, the most intellectually back-ward country of European origin in the world, modern art is already moribund. The Jew dealers are dispersed and the novelty makers have no new dishes to tickle the palates of fin de siecle decadents” [p34].

“Already, in spite of strong protests by the best French artists, a large infantile canvas by the douanier Rousseau has been forced by the Jewish Blum government on the authorities of the Louvre” [p41].

Does it matter that Lionel Lindsay held these racist views or that he published them? I suppose not, but Lindsay was a trustee in Australia’s second most important state gallery (NSW). Trustees had enormous power over the Gallery’s acquisitions, de-accessions, permanent displays, special exhibitions and publications. Lindsay successfully prevented the 1939 Modern Art Ex­hib­it­ion from being shown in his state gallery; cut off normal adv­ertising rev­enues and blocked almost all the paintings from being sold to Australian collections.

I understand that there is a large anti-semitic flavour to the criticism of modern art in the 1930s, 1940s and perhaps well into the 1950s, but I'm wondering how much that was being used as a convenience by the reactionary forces who seemed incapable of understanding even the basics of the modern 'isms'.

I suppose what I'm wondering is, was it easier to blame the Jews for Modernism than to have to admit that you were incapable of understanding the remit of Modernism?

Is that a valid point do you think?

Absolutely I agree. You might have thought that art professionals were paid to innovate, investigate, push boundaries and challenge traditions. You might have thought that the trustee of an important gallery would have been interested in the aesthetic & intellectual developments of modern art, whether he enjoyed it personally or not. Apparently not.

I object only to two things:
a] their refusal to even engage with modern art and
b] the language that they had borrowed straight from Goebbels. This was the language of disease, degeneracy, anti Semitism, racism and perversion.

I think you've knocked the nail on the head!

You would expect an art professional to be balanced and temperate in their public criticisms at least.

However, perhaps not everyone was up to the task, particularly when faced with often confusing 'isms'.

Lionel Lindsay certainly wasn't and should never have been given an important post with such extreme views, which makes you wonder what was in the mind of those higher up the ladder than Lindsay.

Thanks for the interesting and thought provoking topic, as always.

I don't think Lindsey was "racist", I think he was absolutely right, both about the political agenda of those making "modern" art, and its moral and aesthetic repugnance. Before the time period in which Lindsey was critiquing, art in western countries represented the highest creative impulses and traditions of the cultures from which it emerged. Since his time, art has become a negation - not really expressing any kind of affirmative beauty or material impulse, but just opposing & / or desecrating any artistic and ethical traditions that came before. Lindsey was right in stating that this was happening because those creating and promoting modern art hates western peoples and cultures, and actively sought their cultural degradation and physical destruction. Most people know all of this on some level intuitively - the inherent disharmony, sterility, and vulgarity of modern art can't hide itself, so the average person has abandoned artistic disciplines that the general public was admired. In this vacuum, art has become dominated by uncreative, and in some cases depraved and morally bankrupt individuals.

Two important people influenced the outcome for the Herald Exhibition across Australia. The first was NGV director, James S McDonald, who feared moral corruption: "There is no doubt that the great majority of the work called Modern is the product of degenerates and perverts. If we take a part by refusing to pollute our gallery with this filth, we shall render a service to Art."

The second was our Lionel Lindsay, trustee of the Art Gallery of NSW. He wrote: “the Australian Public is perhaps yet unaware that modernism was organised in Paris by Jew dealers, whose first care was to corrupt criticism, originate propaganda and undermine accepted standards so that there should be ample merchandise to handle” (SydMorHer, Oct 1940). “Modernism in art is a freak, not a natural evolutional growth. Its causes lie in the spirit of the age that separates this century from all others: the age of speed, sensationalism, jazz & the insensate adoration of money”.

Dislike modern art as much as you like, but read Addled Art by Lindsay. It is the definitive racist attack on Frenchmen, Jews, Russians and anyone other than Protestant, British and Australian artists.